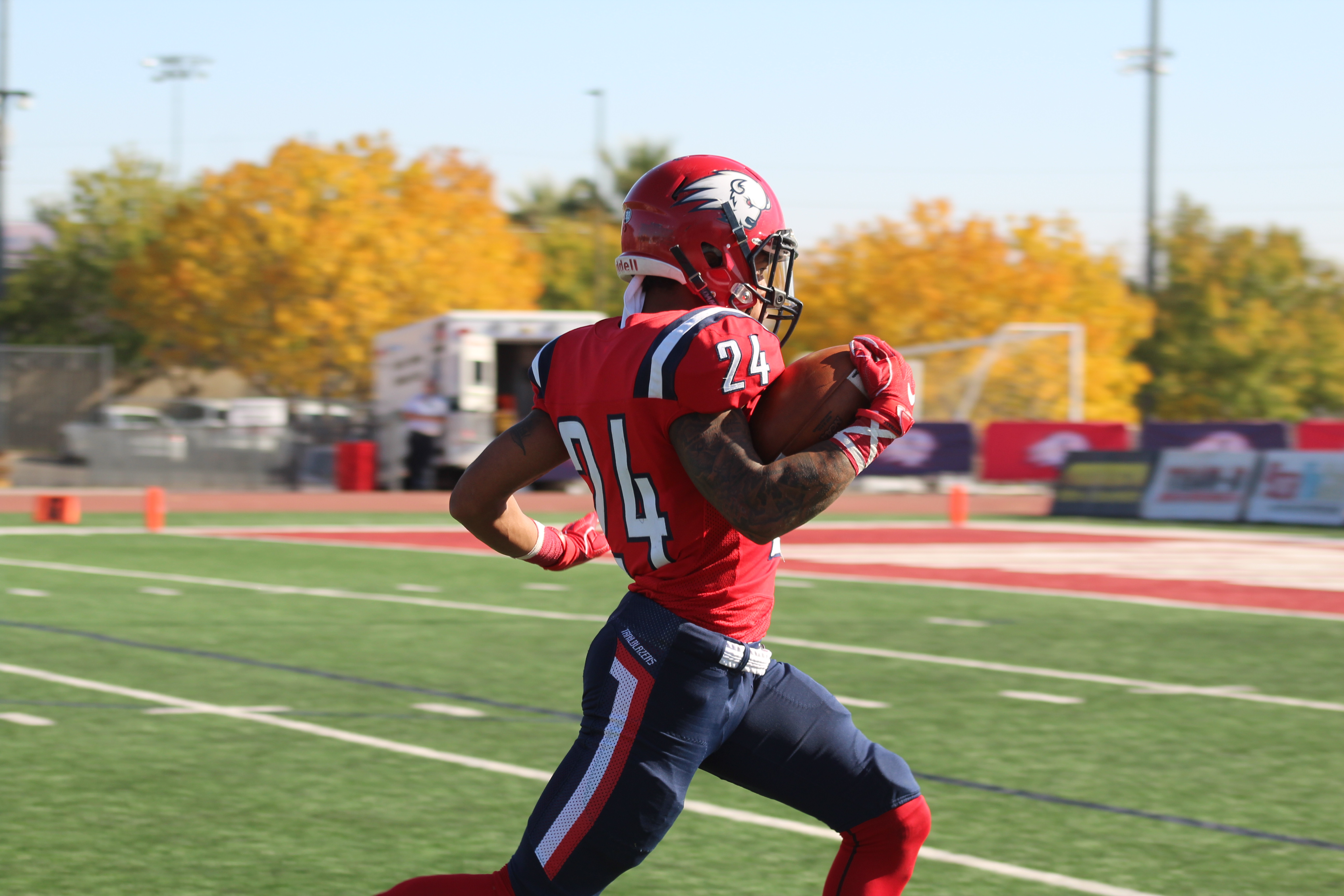 Aaron Simpson, a senior media’s studies major from Pasadena, California gets an interception during the game against Adam’s State on Nov. 16. The game helped the Trailblazers set multiple records. Photo by Madison Boyd.

The Dixie State University football team wrapped up its final Division II season in the Rocky Mountain Athletic conference with the most wins in the program’s history.

After defeating Adams State University, 35-10, the Trailblazer’s final record improved to 8-3, topping last season’s 7-4 record. This year’s team and coaching staff was full of new faces. In this game, quarterback Kody Wilstead, a sophomore accounting major from St. George, tied the record for the most individual single-game touchdown passes. He said there was no better way to end his first season as a Trailblazer than with a win.

“I’m really proud of the seniors, they came in senior year with a new coaching staff, it could have gone either way,” Wilstead said. “They had to hear about how we’re going DI next year, they knew they weren’t gonna partake in it, but they still came out here and gave it their all, they wanted to send us in there on a high.”

Linebacker Alex Lilliard, a senior recreation and sports management major from San Diego, said he was happy with the way his final season of college football ended.

Lilliard said: “Just being with my guys, having my family here to watch and knowing the coaches and players care about me as a person [made this game feel extra special]. It’s more than just football.”

Lilliard led the defense with a game-high of nine tackles. He said he plans to finish out school and hopefully play at the next level.

Head coach Paul Peterson said he was ecstatic about the final win.

“Just being with my guys, having my family here to watch and knowing the coaches and players care about me as a person [made this game feel extra special]. It’s more than just football.”

“I tip my hat to the seniors, they led the way and did some great things for us all season buying into what we were trying to do,” Peterson said. “Now it’s full recruiting mode and we’re gonna basically put a finger on St. George and a six hour radius and get to as many kids as we can and evaluate them.”

As for the rookies that will be coming in next year, Wilstead said they better be ready to work.

“The teams we play are going to be bigger, faster and stronger, so we really need to put in the work in the off season so, if they’re coming in, they better get grinding,” Wilstead said. “I’m excited we’re going to play some good teams, I think we’re going to come out and shock some people.”

Lilliard’s advice to next year’s team is to just buy into the program.