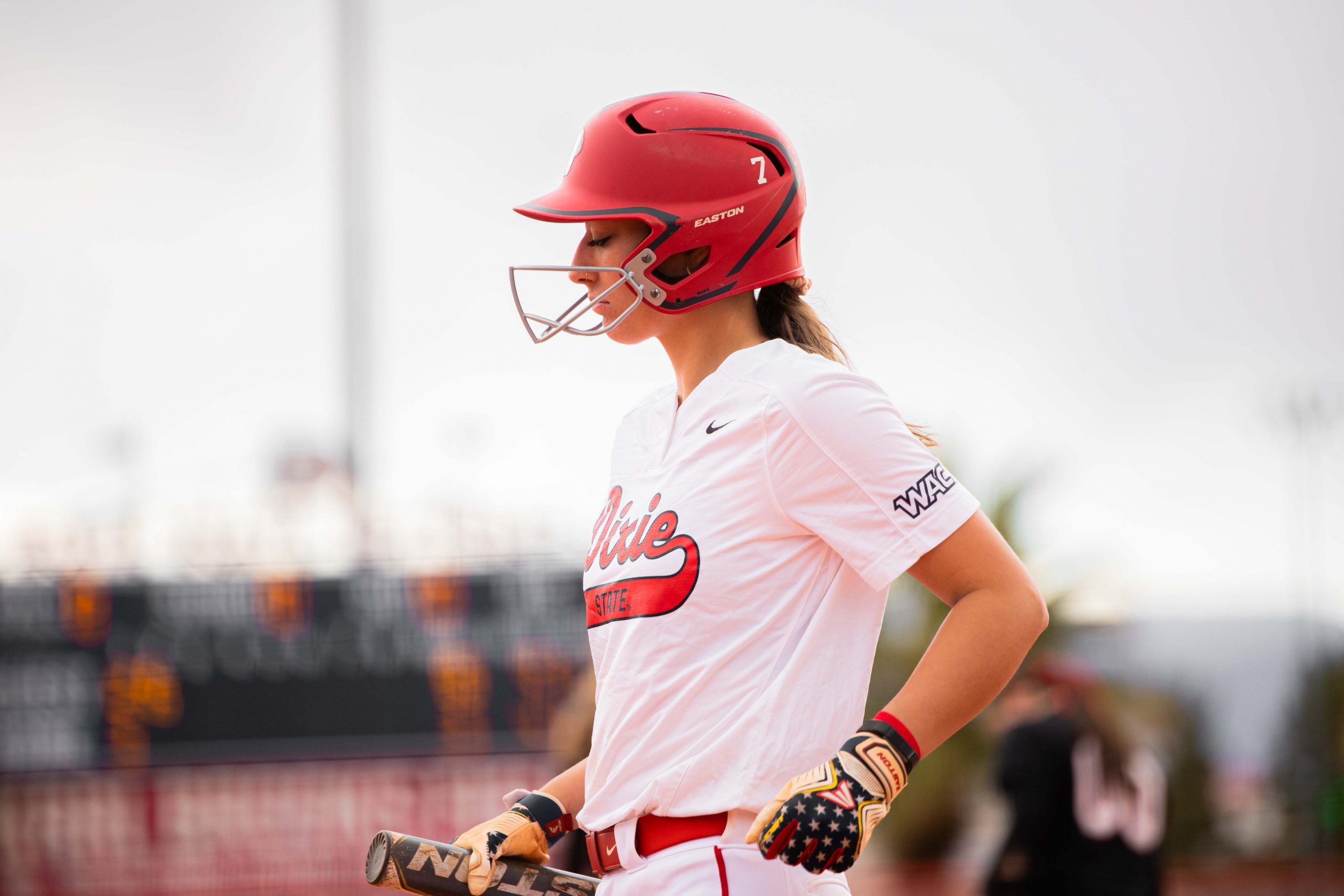 Kirsten Quigley, a graduate from Dixie State University's psychology program from Othello, Washington, plays against Southern Utah University March 14. Quigley is a fifth-year senior who will be playing and be honored in Saturday’s senior night for softball. Photo by Breanna Biorato.

Women’s softball senior day is this Saturday, and it is a particularly special day for Kirsten Quigley, a graduate from Dixie State University’s psychology program from Othello, Washington.

Quigley decided to stay at DSU to play a fifth year due to her senior season being canceled last spring, and she will finally get her senior day.

“I am really excited; obviously, it is different because I am not out playing on the field with my original graduating class and the girls that I was with all my last year,” Quigley said. “We will get to see everyone because we are doing a joint senior day.”

Senior day will highlight last year’s seniors and the current 2020-21 seniors. Head coach Randy Simkins said it is a big moment for Quigley since she is getting the opportunity to finish out a season and get closure.

“I graduated with my degree last spring, and I didn’t really know what I wanted to do with my degree, so it was nice to have this extra year to figure that out in my head and decide what I really want to do,” Quigley said.

Quigley said her passion for the game is what drives her to keep going.

Shea Clements, a sophomore exercise science major from Las Vegas, said: “Quigley had the most experience of all of us on the team, and me, being a freshman last year and the year getting cut short, I was kind of going into this season not really blind but with not much experience. So having Quigley being like a partner, but also like a support system and she knows what to do in a full season, was good.”

Quigley is a valuable player on and off the field since she has five years of experience as a DSU student-athlete. Her teammates admire her work ethic, honesty, grit and kindness toward everyone.

“We recruit ‘good person, good student, good athlete’ and she epitomizes that,” Simkins said. “She has a heart of gold, she’s nice to all of her teammates, she is very patient with the young kids, wants to teach them, [and] wants to learn from them.”

In Quigley’s time being on the team, she has experienced a lot of good times along with a few challenges. Simkins said as a right-handed hitter she started developing problems with her shoulder, as it would come out of the joint when she would swing. She had to have surgery on it and missed part of a spring season.

“We turned her around and made her hit left-handed; well, the same problem happened left-handed,” Simkins said.

They had to think outside the box and ended up turning her around and making her play as a left-handed slapper because that did not have the full follow-through on her swing.

Last year, Quigley started almost every game as a short stop and hit almost .300 as a converted slapper. This year, she is hitting over .250 and her on-base percentage is about .300.

“Through all the stuff this girl has been through, her drive to come back, taking these challenges that are thrown at her head-on with no hesitation, it is truly just inspiring,” Clements said.

Off the field, Quigley is currently building a home with her boyfriend and owns a self-made T-shirt company called Washed Out Customs.

Meagan Anders, a senior psychology major from Las Vegas, and has been Quigley’s roommate for the past two years at DSU. Simkins said their relationship and bond outside of playing softball helps with their playing time on the field.

“It was really nice getting another year together because I really do enjoy having her in my life and she’s a great friend and it gives me an extra year with her to build our relationship on and off the field,” Anders said.