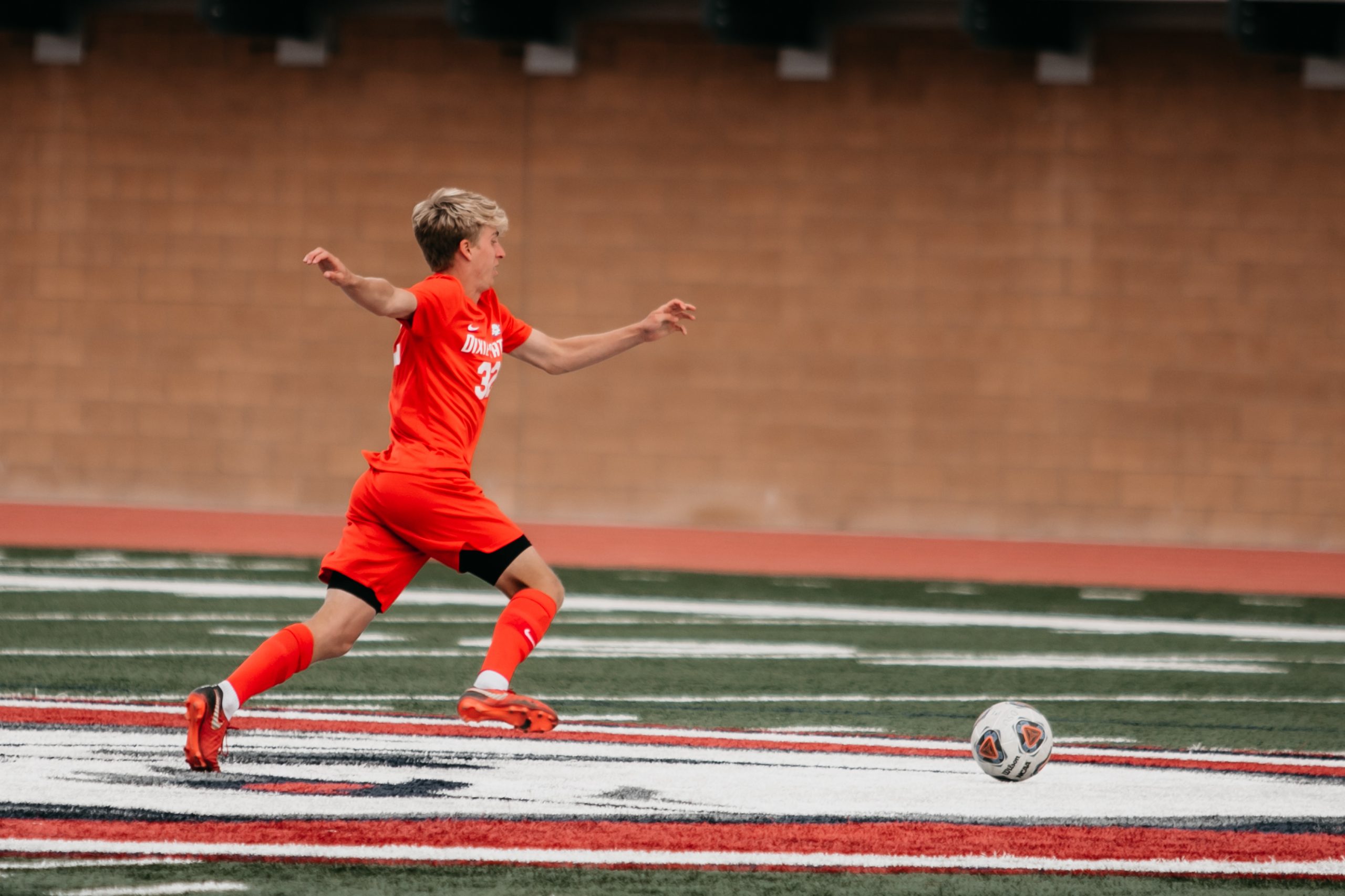 Dixie State University men’s soccer has an athlete on its roster who, before his time at DSU, shared a locker room and practice facilities with Major League Soccer team Real Salt Lake.

A.J. Ciampini, a freshman recreation and sports management major from Riverdale, attended the RSL Academy High School and played for the RSL Academy U19 and U17 teams. During his time with the development academy, Ciampini would train for two hours twice a day and attend classes as a full-time scholarship athlete, but playing soccer always came first.

“I was only [in school] to play soccer,” Ciampini said.

Ciampini said of the 60 players he graduated with, only two signed professional contracts. Most of the remaining student-athletes went to Division I schools to continue playing and to get an education.

“I think even if I was offered I still would’ve gone to college,” Ciampini said. “Getting your education is important.”

Ciampini said although he is glad he’s in school, college has been significantly more mentally, physically and emotionally taxing on him. High school was always soccer first and school second; now, both are a balancing act. In high school, Ciampini had unlimited time to practice and work with coaches, but now he has a limited number of hours he can spend with coaches and his team, but he has to balance school and work there.

The transition from academy to college isn’t just difficult off the field, but also on the field. College soccer is traditionally a more physically-demanding and intense style of soccer than more tactically-based academy soccer.

“It’s not so much as you rely on how good of a soccer player you are [in college],” Ciampini said. “You have to physically be as strong, as fast, as physical as everyone else.”

Ciampini said while in the academy, he was coming from a style where the ball is played on the ground, hardly ever kicked up in the air, and clean tackles are made; he now plays a game that has the ball in the air a lot, as well as down and back running, and aggressive tackling.

This difference in the type of soccer played and the way the athletes are trained is why athletes who come from academies are viewed differently by coaches looking to recruit. Some coaches favor the more technically-trained athletes, while others don’t.

The more prolific academy soccer becomes, the greater the assumption that it is the only path to professional soccer in the United States.

“Yeah, more kids end up making it going that youth to professional route, getting recognized there and signing with a professional team at an early age,” Broadhead said. “But the college soccer thing is still a very good way of giving yourself a great chance. It’s all just if the right person sees you.”

That idea of the right person seeing you is how Ciampini ended up at DSU. Ciampini played for Broadhead’s brother as a part of a youth Olympic Development Program when he was a kid. From there, Broadhead kept tabs on Ciampini, and when Ciampini needed a school to go to, Broadhead knew him and was willing to give him a chance.

“Every day is a tryout, that’s how you have to approach life,” Broadhead said. “You’re on a tryout every single day, [and] you never know who is watching. If the right person is impressed, then you never know what opportunities are going to come.”

For Ciampini, his opportunity comes at DSU. Although he’s still a freshman, he saw a good number of minutes off the bench in his first year for the Trailblazers.

As DSU moves to year two in the Western Athletic Conference in the fall, Ciampini has an opportunity to continue to grow his game and adjust to college soccer and prove that perhaps academy teams aren’t always the right path to professional soccer.