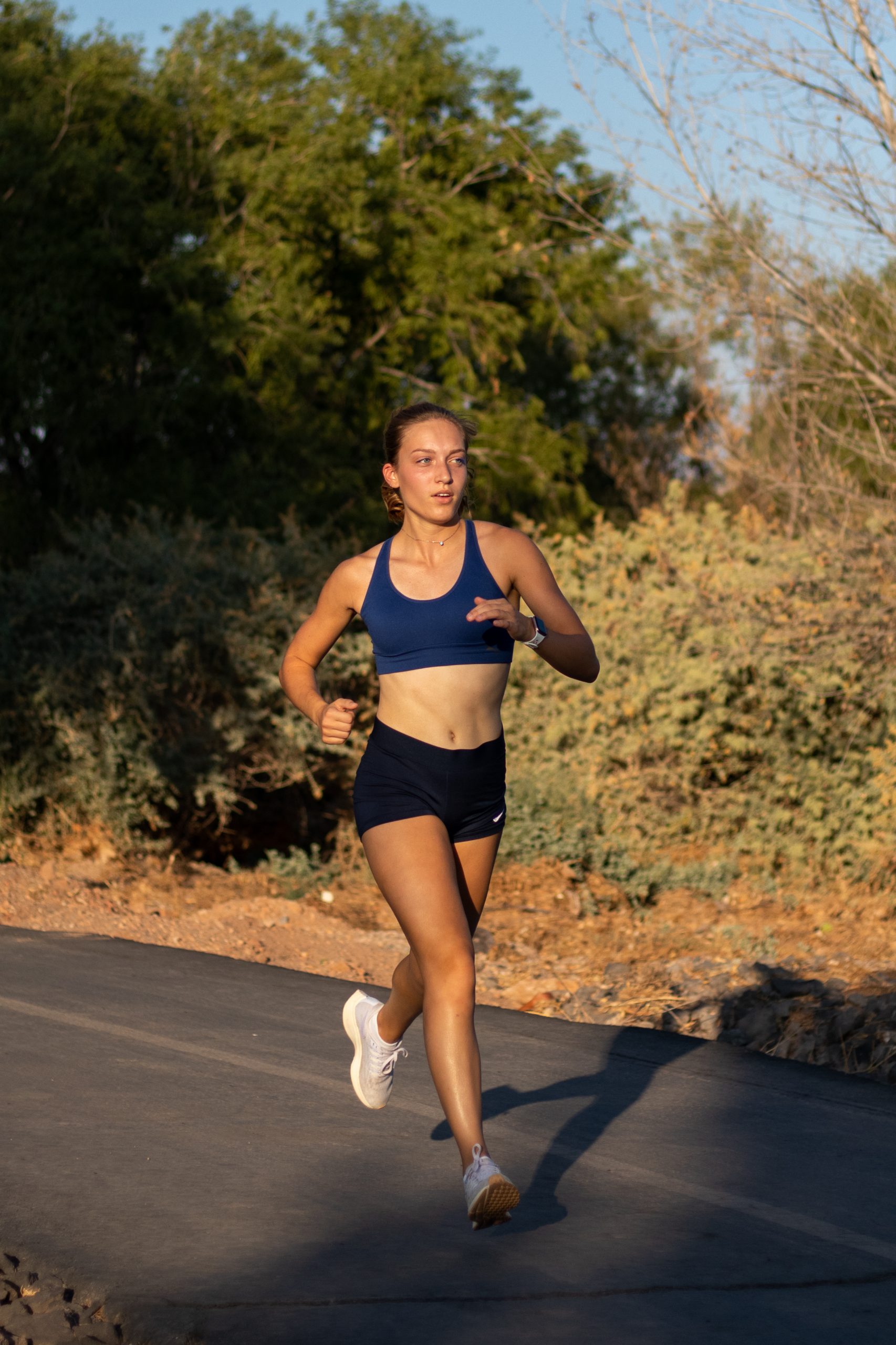 Sydnie Zundel, a freshman nursing major from Willard, takes on the dirt track with her teammates as they maintain their conditioning and endurance for future meets. Since its season was postponed, the cross-country team has not trained frequently together, but each team member has continued independently. Photo by Breanna Biorato.

Cross-country is a team sport, but the work done outside of competition is independent and extensive, something only amplified by restrictions COVID-19 has brought.

Due to the limit of just eight hours per week of practice time set by the NCAA, much of Dixie State University’s cross-country team’s work is done on its own time, and they have to be incredibly self-motivated.

“I kind of have to face [the challenges of cross-country] and be able to face those things because other people are relying on me,” said Tyson McKeon, a senior mechanical engineering major from Stansbury. “It’s not just about me in the sport. As individual as this sport is, we’re still a team and we do still compete in teams of seven.”

When the cross-country teams found out their seasons had gotten postponed, they didn’t stop running. Although they weren’t allowed to spend as much time training as a team, team members still worked just as hard independently.

“Running is a sport that you don’t ever really take any breaks,” said Cassidy Elmont, a sophomore population health major from American Fork. “[Running is] a year-round thing. Maybe you’ll have a week off, but for the most part you’re always running.”

Elmont said she was rehabbing an injury in spring 2020 when her freshman track and field season was canceled, which lead to more self-motivated training. She said she found herself not only trying to rehab an injury, but also dealing with frequent hospital visits for physical therapy during a pandemic.

Elmont said she did find a positive in her injury happening amid the coronavirus, though.

“It did help lessen the pressure coming back from an injury and immediately needing to be back to doing well again and supporting the team,” Elmont said.

Elmont said she worries moving the season will throw off the “loop” the two seasons create when alternating one with another.

“We practically will wait a whole year to compete cross-[country],” Elmont said.

“Safety is always the number one priority,” Decker said. “So if the medical professionals, doctors and everybody don’t think it’s the safest thing to be out competing, then you have to agree with that and do what you can to take care of the athletes, coaches and everybody involved.”

Despite all the unknowns of how its future seasons will work, DSU’s cross-country team is optimistic that it will be successful in its first season in the Western Athletic Conference.

After coming from a strong Rocky Mountain Athletic Conference that included lots of strong cross-country teams, Elmont said she is particularly interested in seeing how her team does in the WAC.

“The RMAC, as far as cross country goes, is a powerhouse,” Elmont said. “So, I was wondering how well we could do against the WAC. I don’t feel like we’d go to the WAC and be last. Of course we’re not going to be number one, we’re just moving to DI, but I feel like we could be in a decent spot.”