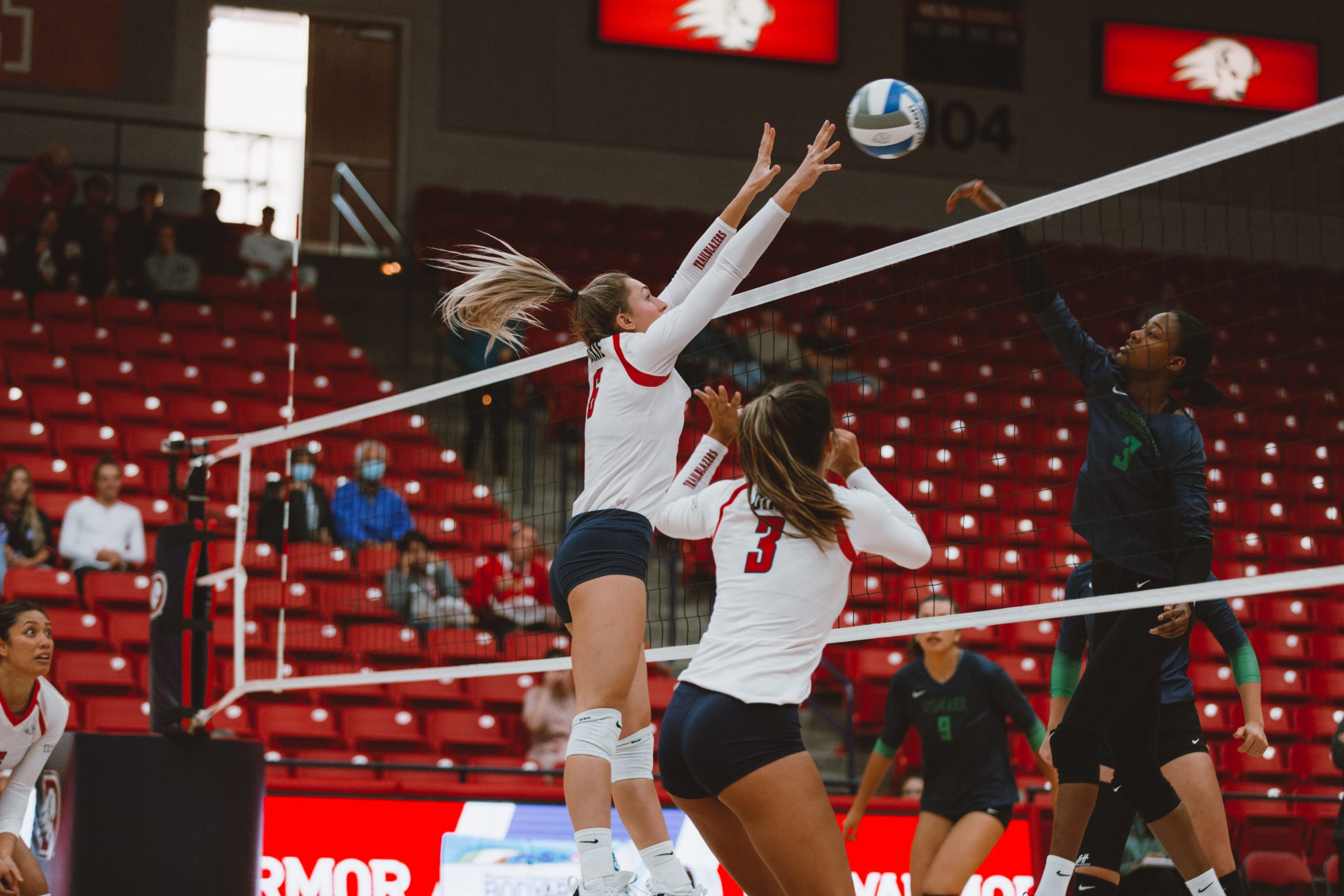 Kate Hardy, a sophomore dental hygiene major from Fruitland, Idaho, goes up for a block against Chicago St. Hardy was awarded a spot on the all-WAC second team this season. Photo by Emily Wight.

Kamilla Hafoka, Dixie State University’s volleyball head coach, along with other coaches within the conference, nominated Hardy to receive the recognition.

Hardy said: “I’m proud of it. The whole team helped me to achieve this, so I feel like it’s a team award.”

Hardy started playing volleyball in her seventh-grade year of school. She since has played in clubs along with being part of school teams since then. During high school, Hardy was a three-time MVP and served as class valedictorian all while maintaining a 4.0 GPA.

Hardy has two younger sisters who motivate her to lead by example.

“My family is one of my biggest motivators because I have my siblings that look up to me,” Hardy said. “I try to do my best in school and volleyball so they can have a role model to look up to.”

Hardy has not only been an example for her family but also for her team and friends.

Hannah Howard, a sophomore radiography major from Bountiful, said: “Kate is the most hardworking, dedicated person that I know. Hearing that she got the award I wasn’t even surprised. She’s a go-getter, determined and selfless person.”

Hardy has completed enough credits to be a sophomore at DSU, but is listed on the roster as a freshman because her freshman year was postponed due to the COVID-19 pandemic.

“She is consistent, so when it came to game time I knew we could rely on her,” Hafoka said. “She doesn’t get super rattled when things are chaotic. Kate’s personality on the court is always calm and that is someone you want to play with especially when things are going crazy.”

This past volleyball season brought seven wins overall and Hardy played part in those wins with her blocks, kills and points.

Hardy’s friends and Hafoka expressed how much they appreciate her because she is humble and a leader by example.

Being mentally present on the court is a hard but necessary job for success. Hafoka said she knows that Hardy deserves the second team all-WAC recognition because she does a great job of being present.

“Making sure that people are good on the court and off the court is the culture we strive for on this team, and that’s all Kate,” Hafoka said.