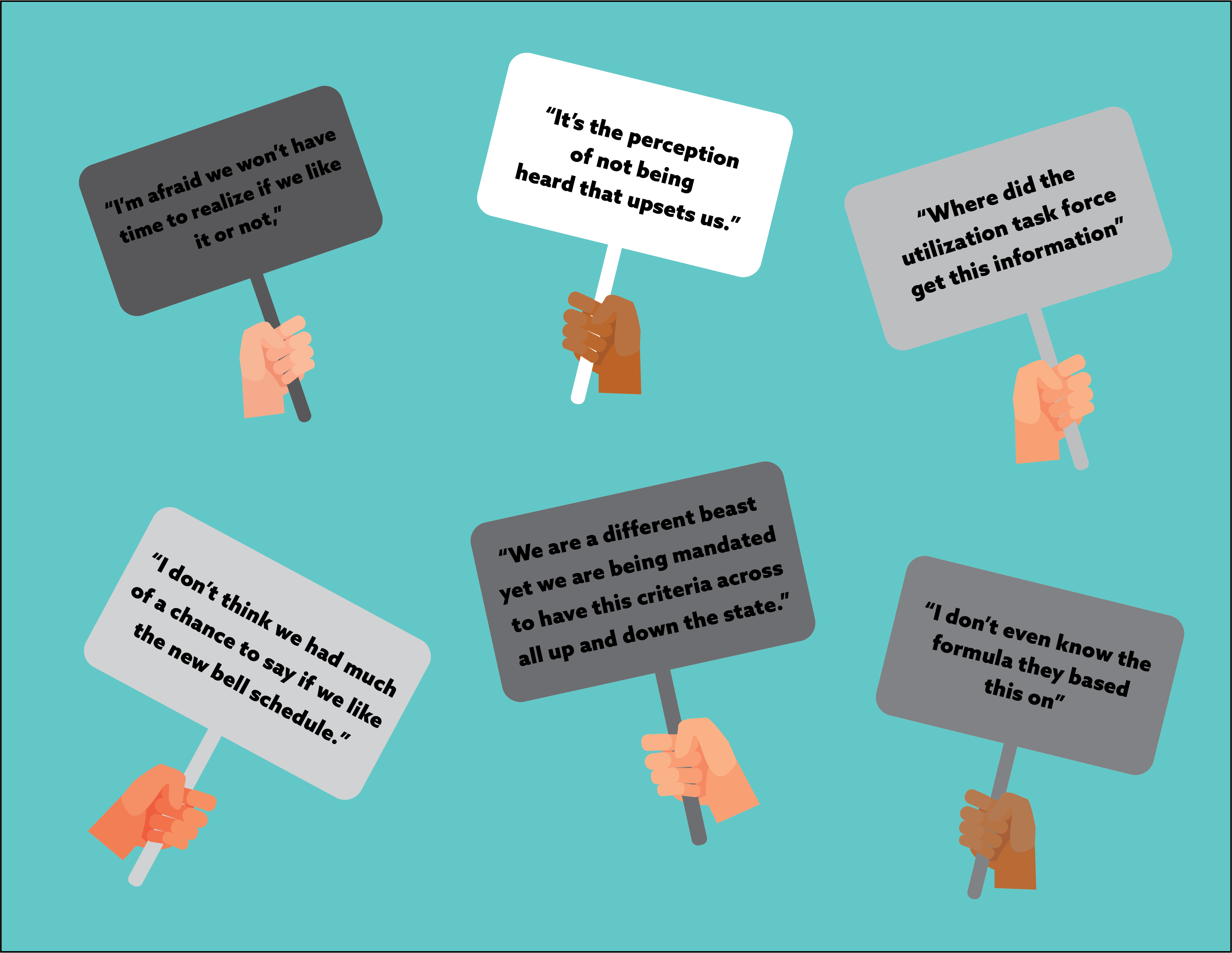 Members of faculty senate voice their thoughts of how the university implemented the new bell schedule for fall 2020. While the members have these concerns, they are remaining supportive for the university. Graphic by Kelsey Jackson

The Faculty Senate Committee has raised concerns about the process in which the new bell schedule was proposed.

As stated in a previous Dixie Sun News article, “The altered bell schedule is part of Dixie State University’s attempt to meet space utilization standards set by the Utah System of Higher Education.”

Michelle McDermott, associate professor of nursing and the faculty representative on the space utilization task force, stated in the most recent faculty senate meeting, “We discussed this last fall, and we were in agreement with the necessity of doing it so that we can justify more buildings.”

Though this is accurate, Chelsea McCracken, assistant professor of interdisciplinary arts and sciences and member of faculty senate, said, “We also said we wanted to see some of the research and rationale for why this is being done in the first place.”

A few questions brought up by McCracken were: Where did the utilization task force get this information and where is the evidence as to why this would be an effective way to change our bell schedule?

“It sounds like [the task force] maybe did a study, like a space usage study,” McCracken said. “They could have released that study to us, so we could see the evidence.”

Samuel Tobler, associate professor of physics and president of faculty senate, said the space utilization task force provided a first draft of the bell schedule to faculty senate to review a few months ago, in which the faculty members raised concerns about, but it was not followed up with before the final proposal was submitted.

Jason Wilde, assistant professor of family and consumer science and member of faculty senate, said in the most recent faculty senate meeting: “I don’t think we had much of a chance to say if we like the new bell schedule. I don’t even know the formula they based this on or the research they did behind the bell schedule.”

McCracken said she is supportive in terms of the bell schedule change if it’s going to solve the problems the university is worried about.

“As a whole, the body of the faculty understand why this bell schedule is being put upon us,” Tobler said. “We understand this is DSU’s response to basically under-performing to the criteria that is being mandated for us.”

The problem is the faculty members expressed feelings of not being heard and listened to, Tobler said.

“Most faculty feel that as long as they get their opinion across, even if their opinion is not what the end result is, they’re okay if it was still rejected,” Tobler said. “It’s the perception of not being heard that upsets us.”

One of the issues the faculty brought up about the bell schedule is the unbalanced expectation for space utilization, Tobler said. The space utilization expectations are the same for the whole state, but DSU is much smaller than the other universities in Utah. The size of DSU’s courses don’t align with the sizes of classrooms, which is why it may seem like the university is not using it’s space properly.

“The next step as I see it is rearranging rooms to better correspond with the size of courses,” Tobler said.

McCracken said the issue with space utilization seems to be about class capacity matching the class sizes.

“I’m afraid we won’t have time to realize if we like it or not,” Tobler said. “We want to be supportive, and so we are going through it. We’ll just have to see where it goes.”

Pamela Cantrell, associate provost for academic and budget planning, said the faculty’s concerns were recently brought to her attention, but she was not able to comment on it at this time.

Tobler said: “We are a different beast yet we are being mandated to have this criteria across all up and down the state, so [the task force was] given a hard task and I applaud them for even coming up with this however it turns out to be. I wish them the best. When you’re given a tough task, you’re not going to please everyone.”