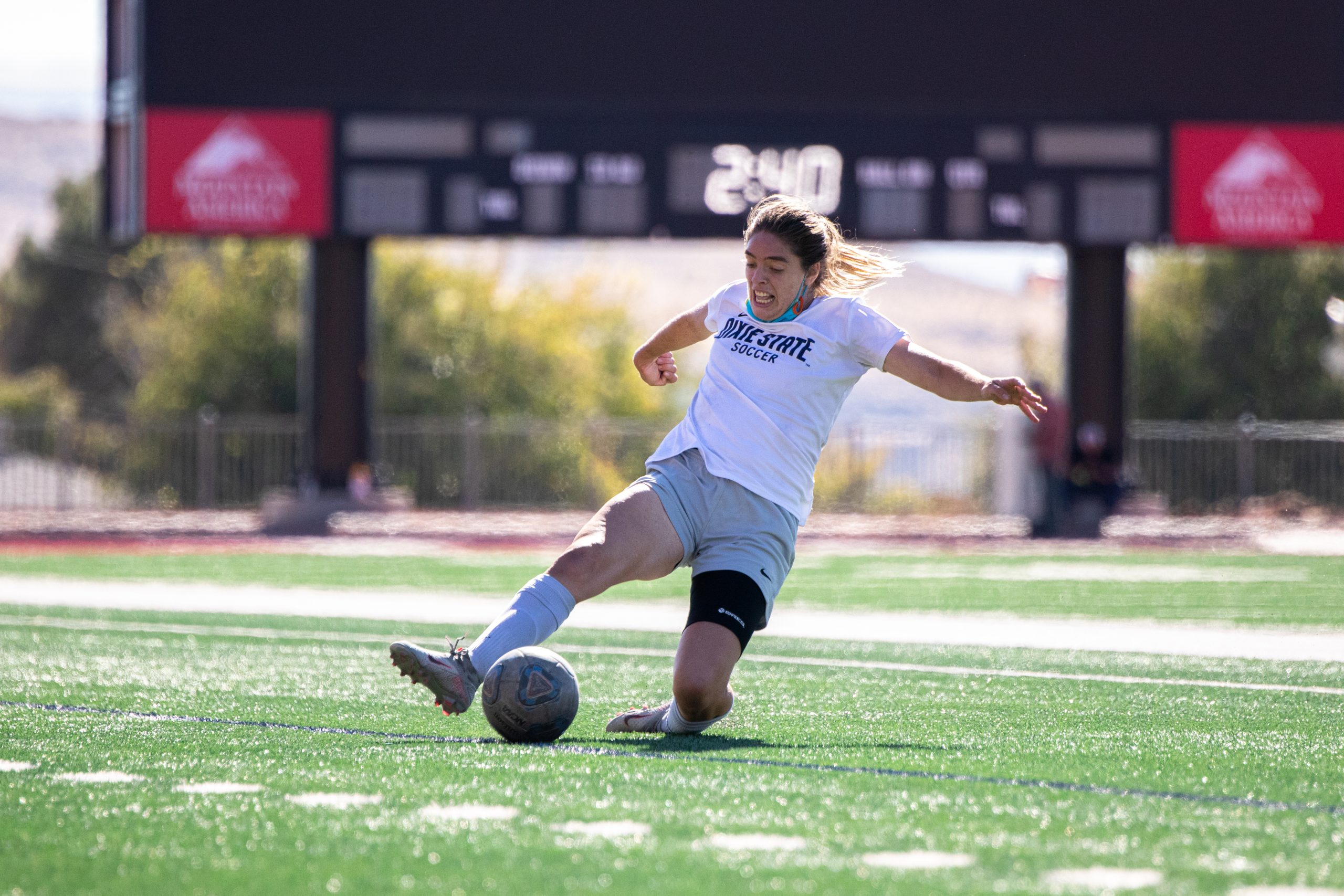 As the Dixie State University women’s soccer team prepares to take the pitch for its inaugural Western Athletic Conference season, the team will kick things off by hosting three of its first four games against in-state schools.

“We are fortunate this spring to take advantage of the incredible location of St. George to host four very competitive programs,” head coach Molly Rouse said. “Each of these visiting programs will challenge and test our tactical and physical abilities and provide an amazing opportunity to learn, grow and prepare for WAC play in mid-February.”

Last year, Weber State finished just 2-10-5; however, its roster for the 2021 season consists of 16 upperclassmen out of 30 total roster spots. The Wildcats are expected to be more experienced this year, which could result in more victories.

The Utes finished 8-9-4 in their 2019 season with a 3-5-3 conference record. The University of Utah is currently in the Pac-12, which is one of the nation’s Power-5 conferences. Because of the school’s conference ties, this brings recruiting opportunities and out-of-state talent some schools may not have.

The T-birds didn’t have the season they were hoping for in their 2019 campaign, recording just one win out of 18 games; however, SUU comes back this season with more experience and ready to avenge its record from last season. With only six upperclassmen and 13 lowerclassmen, SUU is still a young team.

As DSU transitions into Division I competition and the WAC, this has created the potential for more in-state rivalries to be born.

“The excitement and energy surrounding [DSU] as we transition to the Division I level certainly played a major part in solidifying these matches,” Rouse said. “We are lucky to be in a state with a supportive soccer community, with strong programs who were each interested in scheduling a spring match with us.”

Along with DSU joining the WAC, SUU also recently accepted an invitation to join the conference and will begin its transition period next year. As both schools look to create an identity for themselves, we can expect great matchups between the two teams. SUU will officially start its first season as a WAC member next year.

“After hearing SUU was joining the WAC, it definitely set the tone,” said Jaci Cook-Dandos, a junior biology major from Farmington. “Because SUU is so close, a lot of times we get compared to each other, so it’s always fun to compete with them. We’ve scrimmaged SUU in the past and it’s always a competitive match.”

As SUU becomes a common foe for the Trailblazers, the T-birds will also become more familiar with another WAC member and potential in-state rival: Utah Valley University.

“We … know girls that played at the University of Utah, UVU or SUU from playing against them growing up, so it’s definitely going to be fun to have those matchups again,” said Ashlyn VanTussenbroek, a junior psychology major from Salt Lake City. “It’s definitely a Utah pride thing; you want to be the best school in Utah. [Now], playing schools like Utah, SUU creates the mentality of ‘who’s going to [be the best soccer team] in the state?'”

Not only does joining the WAC create in-state rivalries for the Trailblazers, it also sends a message to the rest of the state.

“[Joining the WAC] is going to push people to take us seriously, and I’m really excited about that,” VanTussenbroek said. “With us being in the category of prestigious schools like Utah, UVU and Weber, they all have great programs, so to be competitors with those guys makes everyone realize how serious and good our program really is.”

Cook-Dandos views this as more than just a matchup for the Trailblazers when they face off against these in-state teams.

“A lot of girls in high school would be signing on to [U of U] or BYU their freshman year, then when I signed to [DSU], it kind of felt like a jab in a way,” Cook-Dandos said. “Now it’s exciting to be playing games against them and to be able to show them what we are and how much we have worked for this. It brings out a whole different level of competition when you play against people you’ve grown up with.”