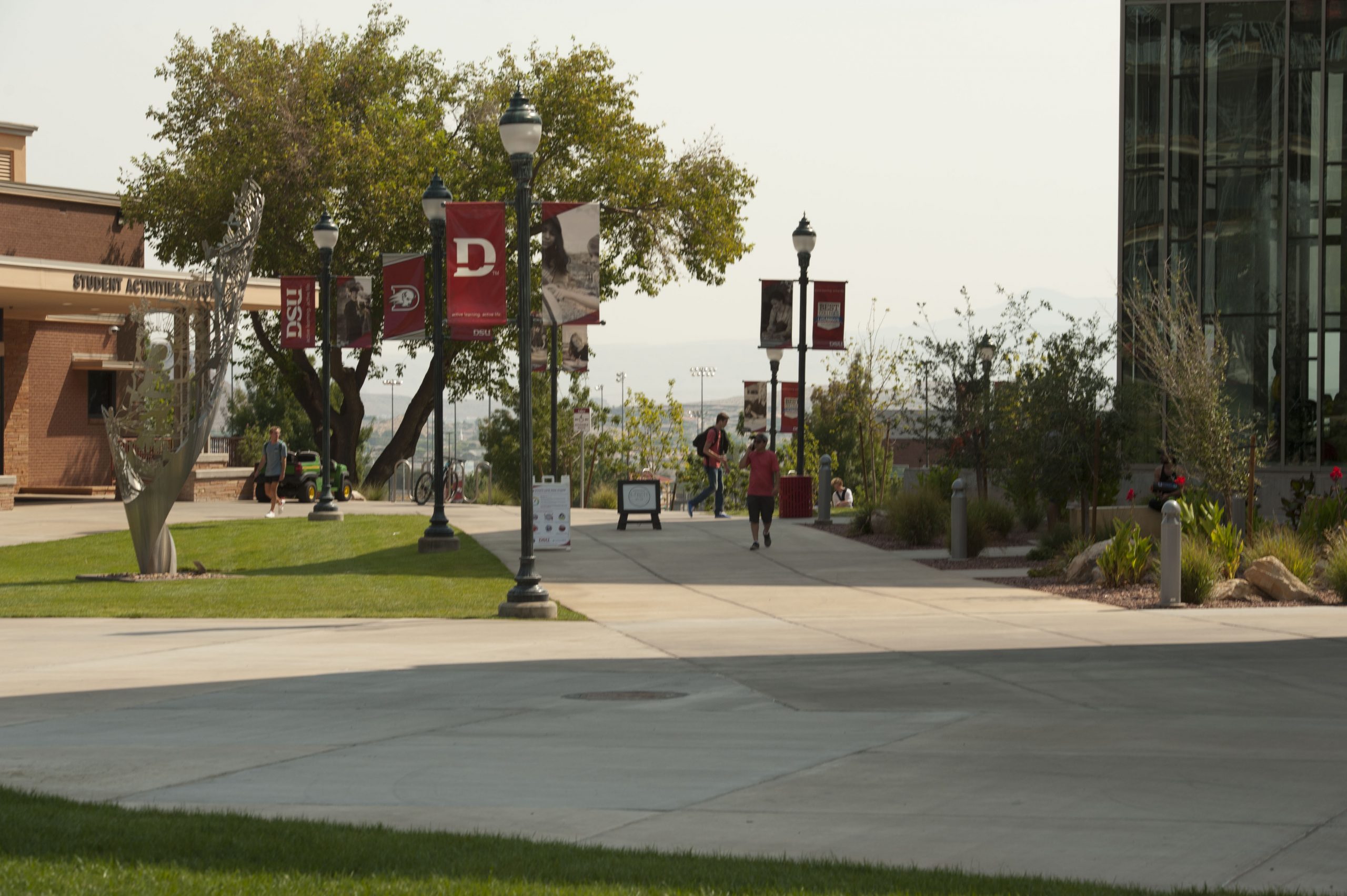 Dixie State University has been able to remain open for in-person classes. In an effort to remain open and safe, the university canceled select events, but the DSU Student Association is planning to continue smaller events. Photo by Tianna Major.

The Dixie State University Student Association is still planning to host smaller social activities on campus for students despite the recent cancellation of major events like CHAOS.

Though the last half of Homecoming Week and CHAOS was called off, Student Life Coordinator Sarah Ramaker said students should not expect future school activities to also be canceled.

“We are still planning to move forward with events we have planned,” said Student Body President Penny Mills, a senior communication studies major from Orem. “Students can still participate in club activities along with our weekly Wednesday events.”

Luke Kerouac, director of student involvement and leadership, said events students can look forward to include Bob Ross Paint Night, a video game event, a tree lighting ceremony around Christmas time, and even a possible rescheduling of the Powder Puff game that was canceled during Homecoming Week.

The cancellation of events has negatively impacted DSU students, but the student life team has been creative in turning the canceled events into smaller-scale events where students can still be involved and participate, Mills said.

Kerouac said: “It’s heartbreaking; I don’t ever want to cancel those big events that students look forward to. They’re where people meet their best friends, their spouses and their life-long companions, and you know, make these memories that are incredible that you really think back on.”

A recent email sent through Dixie Announce by Central Scheduling Coordinator Jenny Smith states that while planning on-campus events, everyone must now follow the COVID-19 Attestation for Transmission Index Guidelines check-list in order for the event to proceed.

The check-list was created due to the change in the campus COVID-19 guidelines, Smith said. Guidelines on the list include regulations for concessions, number of attendees, a plan for social distancing, hygiene and sanitation stations, among others.

“As a freshman, I do feel like I was a little let down this semester as far as having the whole freshman-experience thing,” said Abigail Yadon, a freshman exercise science major from Idaho Falls, Idaho. “I do understand, though, that big dances and stuff like CHAOS needed to be canceled because they can become too big to control with masks and social distancing.”

An Instagram post by DSUSA promoting CHAOS was met with backlash from students who said it was not a good idea to have the event because of the recent spikes of COVID-19 cases in Washington County.

One comment from a former DSU student stated: “So we are pretending that the pandemic just went away and that cases aren’t spiking in St. George?” Another DSU student commented: “This should be canceled… A bunch of people are going to get Covid and then classes are going to get shut down again. I’d rather be able to attend my classes than this.”

The negative feedback from several students on social media was something that members of DSUSA took into heavy consideration, Ramaker said. She also said DSUSA always values the feedback and voices of students and wants every student to feel like their voice is heard.

“With the rise in COVID cases in southern Utah, we no longer felt as though we could provide an atmosphere that would cater to those needs,” Ramaker said.

Ramaker said in an executive council meeting on Oct. 25, DSUSA members and leaders voted to cancel the dance in the hope that it would prevent the spread of COVID-19 on campus and allow students to continue attending class in person.

“Our goal for CHAOS was to provide an opportunity to participate and interact with other students within a controlled environment,” Mills said. “We didn’t want to be a contributing factor to the spreading of the virus, so we felt it was best to not host a large event at this time.”

Mills said CHAOS had a budget of $4,000 and despite the cancellation, the majority of things that were purchased were reimbursed by the companies or will be used for future DSU events, so the money spent will not go to waste.

“We’ve been kind of lucky this year; most companies understand right now that everything is kind of up in the air, so most of them have been great to deal with when we’ve had to cancel stuff,” Kerouac said.

Kerouac said the committee in charge of planning CHAOS purchased hundreds of pumpkins that were given out for free to students on campus on Oct. 29 along with other prizes that were also purchased for the event.

Students can participate in the next social event, Bob Ross Paint Night, on Nov. 4 at 7:30 p.m. in the Kenneth N. Gardner Student Center.