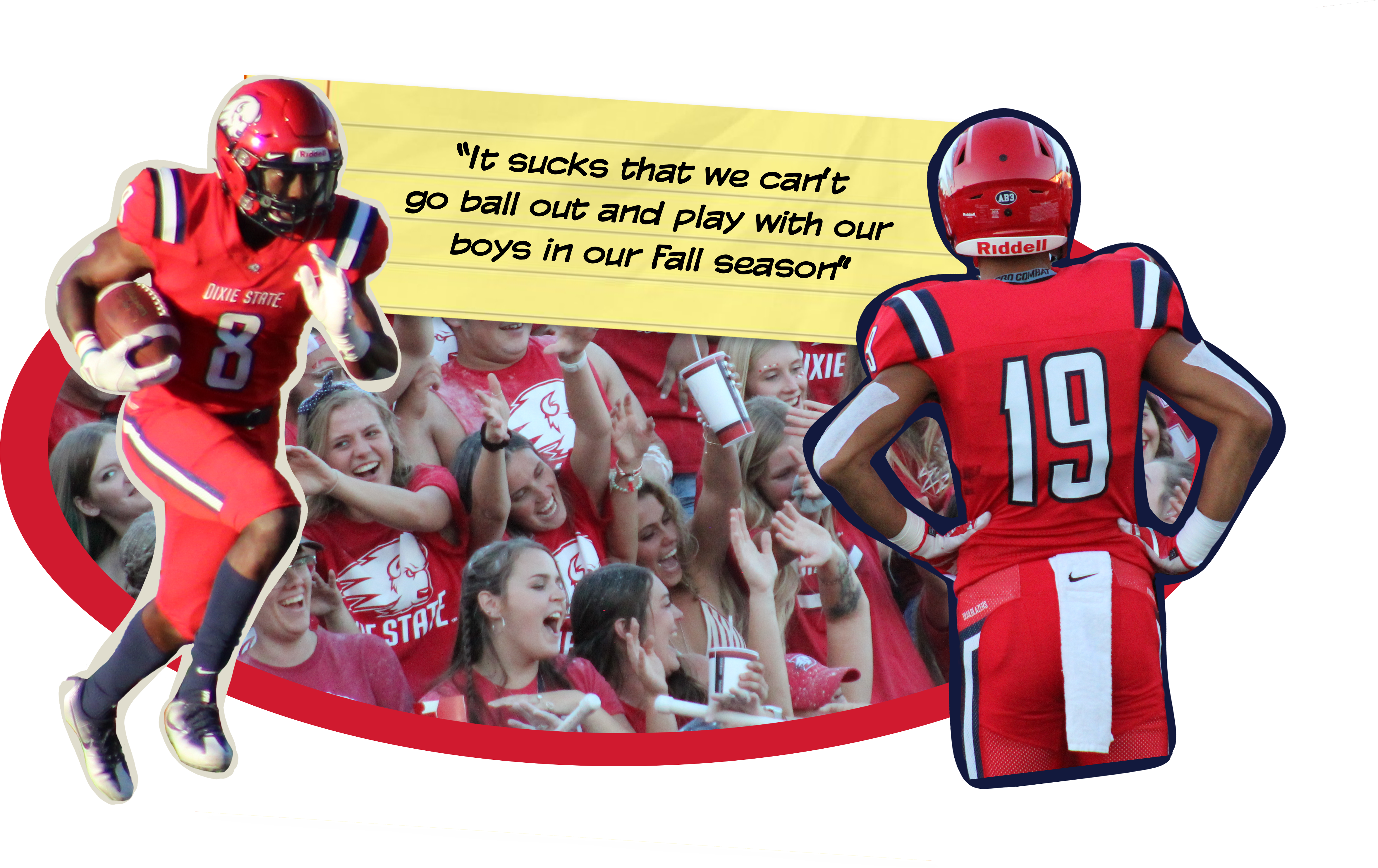 Football players continue to practice and participate in service projects while their season is suspended. Graphic by Emily Wight.

Dixie State University football was anticipated to make its DI debut this fall, but with the season’s suspension, the team is now looking to focus on the community and academics.

DSU finished its final DII season in the Rocky Mountain Athletic Conference with a respectable 8-3 record, a season that left DSU fans in high anticipation of the coveted DI debut. Due to COVID-19, though, this debut was pushed to spring 2021 as most major football conferences suspended their seasons in hopes of protecting their athletes.

Although there are no games to be played, that doesn’t mean DSU football is taking a break. The NCAA is currently allowing teams to practice, lift and meet for up to 12 hours a week, and DSU football head coach Paul Peterson is using all of that time to prepare for the jump to DI football.

The team currently practices three days a week, has meetings four times a week and lifts four times a week. In addition, the team participates in what Peterson calls “family group meetings,” where the team goes over academics and leadership principles. For Peterson, “It’s all about player development on and off the field right now.”

The team immediately went into an offseason mode after essentially running out of teams to play against.

At this point though, players and coaches are just optimistic about the potential season they’ll be playing and have high hopes the added time to prepare will equate to success.

“It sucks that we can’t go ball out and play with our boys in our fall season,” said Chase Hess, a senior communication studies major from Taylorsville. “But in a sense – and all our coaching staff has preached to us – that this might be a blessing in disguise that we get another six to eight months to be able to prepare mentally and physically.”

The mental preparation is arguably just as important as the physical preparation. The team has been having its family meetings and has been active in the community by taking part in service projects as a team to help make a positive impact on the St. George community.

DSU football has helped around St. George in a number of ways. From helping students move into dorms, to rescuing hikers, lifting sunken cars and cleaning up after a flood, this DSU team is heavily involved in the community.

“We transitioned into offseason mode and just tried to get bigger, faster, stronger and just tried to develop them,” Peterson said. “But now we’ve got great opportunities to do some service projects in the fall and help them academically as well.”

Hess said he was initially nervous about the potential loss of his senior season but is ultimately excited for the extra time to prepare.

“Being able to lead by example or show the underclassmen what it takes to play at this next level and who we’re about to play, I think that’s most important moving forward,” Hess said.

Both Hess and Keaton Mott, a senior computer information systems major from South Jordan, were looking forward to playing the bigger DI schools. Although Hess was a transfer from Snow College and has played some of the schools Dixie was supposed to play, he said he doesn’t care who he plays, he just wants to be back out on the field.

One game Peterson was excited about was the game against Southern Utah University that was originally supposed to be the DI debut.

Peterson said he was hoping to use that game to show the FCS that DSU is meant to be a top tier program and is going to stay there.

This DSU team is planning to start setting up a potential spring schedule when more NCAA rules are known, but this team knows that whenever the moment comes they are ready to play football.

Mott said it best, “We’re all ready to play whenever we need to.”