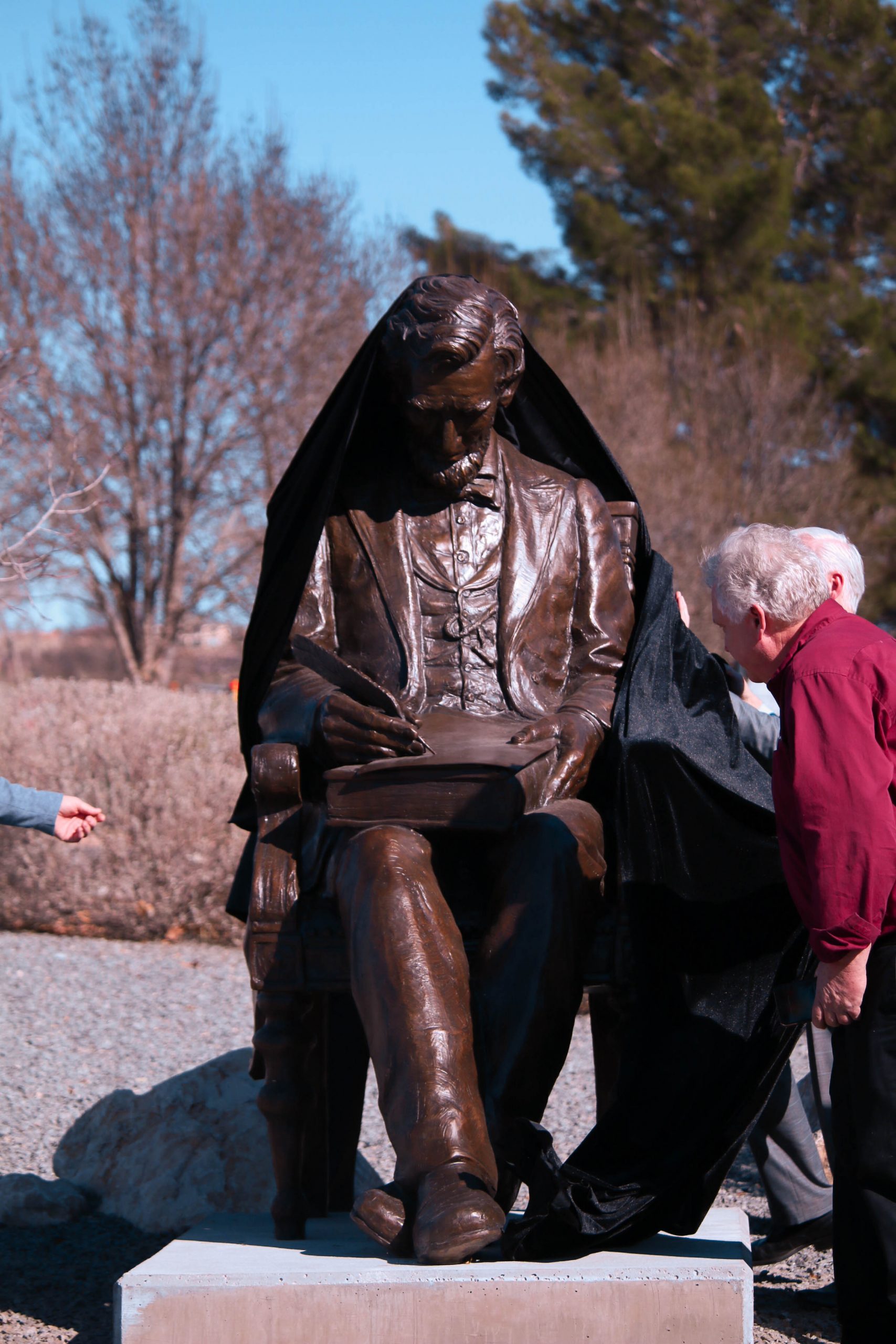 The new Lincoln statue was unveiled on Feb. 14. The statue is located west of the Eccles front entry way. Stop by and appreciate this new art piece. Photo by Nickelle Blanton.

Dixie State University welcomed another inspirational statue on Feb. 14 with hopes of inspiring a new sense of freedom for students.

Jeff Jarvis, dean of the college of the arts, said DSU is lucky to have one of three statues of a 7-foot-tall Abraham Lincoln signing the Emancipation Proclamation ever created by artist Stan Watts. The statue is located outside the Dolores Dore Eccles Fine Arts Center.

The statue depicts Abraham Lincoln sitting in a chair holding a large book with a paper on top. The title doesn’t appear on the book; it’s left up to the viewers to figure out what book it is, Watts said.

“I’m not going to tell you because it’s a good book,” Watts said. “If you know Lincoln, then you know what book it is.”

Jarvis said he wishes not to disclose the price of the statue due to the high cost.

Watts is an artist, sculptor and the owner of Atlas Bronze Casting Company. Watts was born in Salt Lake City and was recognized as a sterling scholar artist in high school. He later went on to attend Utah State University. After graduating from Utah State University, Watts had the opportunity to be tutored by sculptor Arvada Fairbanks.

Watts said he paid attention to every detail while creating the sculpture – even making the handwriting authentic, Jarvis

Watts said he printed a copy of the actual Emancipation Proclamation to scale and carved through the paper to include Lincoln’s actual handwriting on the statue.

He said he wanted to make sure that the writing stopped on the letter “B” of “Abraham” to symbolize what Lincoln did was only the beginning and we are in the process of getting to where Lincoln intended the Emancipation Proclamation to take America to.

Watts said he only creates sculptures of people who have done or are doing something to uplift people.

“I don’t honor men; I honor what they did,” Watts said.

The statue was donated by K.C. and Nancy Erickson, who said they enjoy collecting rare art and books.

The Erickson family said they want to be able to share this piece with their community since this is where most of their family resides and where they come to vacation.

Justen Erickson said he was happy to be part of expanding the knowledge at DSU, which he said is done by inspiring students to look up Lincoln and what he did when they walk by the statue.

“People only tend to remember two things: great leaders and great artists,” said Erickson “Us little guys usually get forgotten, but we are happy to be a part of it in any way.”