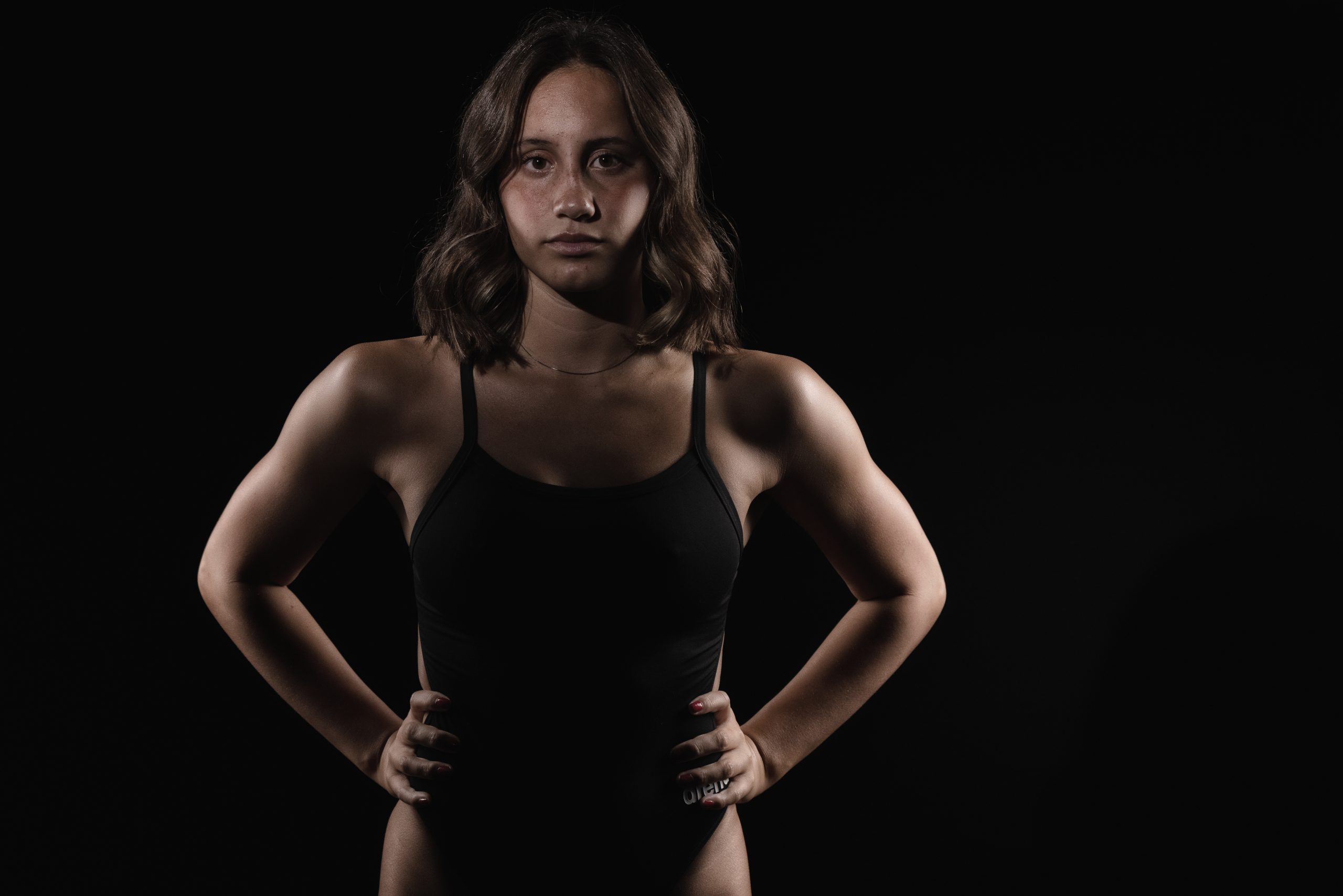 Akalia Bostock, is a sophomore exercise science major from Provo. Bostock was able to bring home a win for the 200 free with a time of 1:54.93 from their game against University of Idaho on Jan 29th. Photo courtesy of University Marketing & Communication

The Dixie State University women’s swimming team dominated in an Idaho dual on Jan. 29, winning the event in a 32 point lead.

The team won two team events and seven individual events. As a team, they won the 200 medley relay and the 400 free relay, and four athletes on the team won individual races.

Sansores started swimming when she was 4 years old as a safety mechanism, she found her love for swimming, and eventually made it to DSU. Sansores said the transition was a long process, but she is loving every moment.

When Sansores started swimming competitively, she mentally prepared herself for every meet moving forward. To relive the anxiety, stress, and pain she was in, Sansores looked at the day as if it was just a regular day. “I know I am in pain in practice every time, I just have to remember that it is one race and I have to move fast,” Sansores said.

Fellow athlete Kyrie Nicolds, a senior psychology major from Ogden, won two of the individual races including the 50 free sprint race in 24.64 and the 100 free in 53.77.

Nicolds passion for swimming first sparked when she went on boating trips with her family. For safety she had no choice but to wear a life jacket, although she hated it. Nicolds made it her goal to prove to everyone that she didn’t need it.

“My dad said if I pass all levels of swim lessons, I could take off the life jacket,” Nicolds said. “I did all the swim lessons.”

As Nicolds continues her passion as a senior on the DSU women’s swimming team, she has made mental preparations to help her perform at her best. This includes getting to bed early, taking a warm shower in the morning, and taking 15 minutes to reflect on her races for the day.

Depending on her meets, Nicolds mentally prepares herself a couple days prior and takes warm 2showers the morning of. For more complex meets such as conference, she prepares a week or two ahead.

Akalia Bostock, a sophomore exercise science major from Provo, achieved her victory in her individual race, the 200 free with a time of 1:54.93.

Bostock started swimming at age six, when her parents put her into a swim camp. The swim coach at the camp saw skill and potential in Bostock, and gave her the opportunity to compete on the team.

Bostock mentally prepares by visualizing her races, trusting the process, training and effort she puts in at practice. Right before Bostock gets on the block, she goes through a routine that consists of smacking her thighs, hands, calves and lastly her back, to fully get into the right mindset.

Head coach of the DSU women’s swimming team, Dan Kesler, said, “swimming is an accumulative sport, and there is a lot of time and preparation that goes into each meet.”

Kesler said one mental preparation he wants his athletes to think of before they start is thinking to do their best and not stress about anything more. Mental preparations and concentrating on the process, and getting a little better everyday will go a long way.

Kesler said the goal for the rest of the season is to work hard at practice and continue to move up in the conference standing, with hopes to compete in the 2022 WAC Women’s Swimming Championships.

As the season is coming to an end, the team will continue to work for each other and finish up the regular season in Las Vegas, Nevada at the UNLV First Chance Invite on February 12.