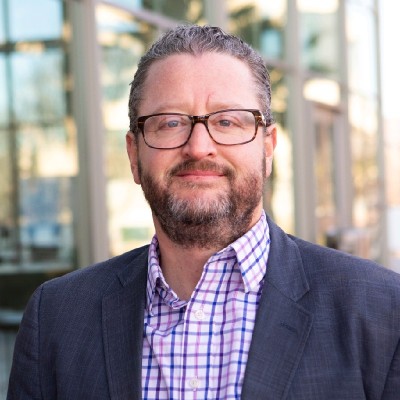 Mathematician by day, musician by night. Jesse Hicks, assistant professor of mathematics has a love for music. Photo courtesy of UMAC.

Jesse Hicks, assistant professor of mathematics, has been teaching for 12 years and has a background in mathematical relativity which is within a branch of math known as differential geometry. His love for general relativity and Einstein’s theory of gravity is what drew him to math.

Hicks said: “I love and appreciate deep truths honestly. I like fundamental truths. That’s what I’m always hunting for.”

Hicks went into teaching because of the thrill that comes from helping students along the journey to find those “a-ha” moments. He said he enjoys seeing students advance in their own understanding of things because mathematics is logical and has definite right and wrongs.

Avery Hansen, a sophomore psychology major from Syracuse, said: “His teaching style is very efficient and he has good control over the class. He makes it fun to go to class because he’s very understanding of his students and their lives outside of school.”

Other than a passion in math, Hicks also loves music. He has always kept music between himself and his family but has recently considered releasing music for fun.

“I’ve never had this vision of trying to be famous or release songs, but recently I’ve been thinking, why don’t I just see if people like it?” Hicks said.

Hicks dedicates his time to work, math, music and family. His favorite band is The Beatles and one of his favorite songs is “Let it Be.”

Hicks is a compassionate and understanding professor who wants to work with each student to come to an understanding of the complicated material.

“There are truths out there that we have to kind of bend, we can’t dictate how the universe will operate and that’s a hard thing to face,” Hicks said. “It’s a hard thing to appreciate, it’s hard to keep it understood constantly.”

Mckay Sullivan, assistant professor of mathematics, said he wants to help everyone be their best self.

When asked about his favorite class to teach, Hicks said, “It’s like picking a favorite kid, I do love topology, but I love abstract algebra as well.”

Math is typically thought of as a very black and white topic while music has no right answer.