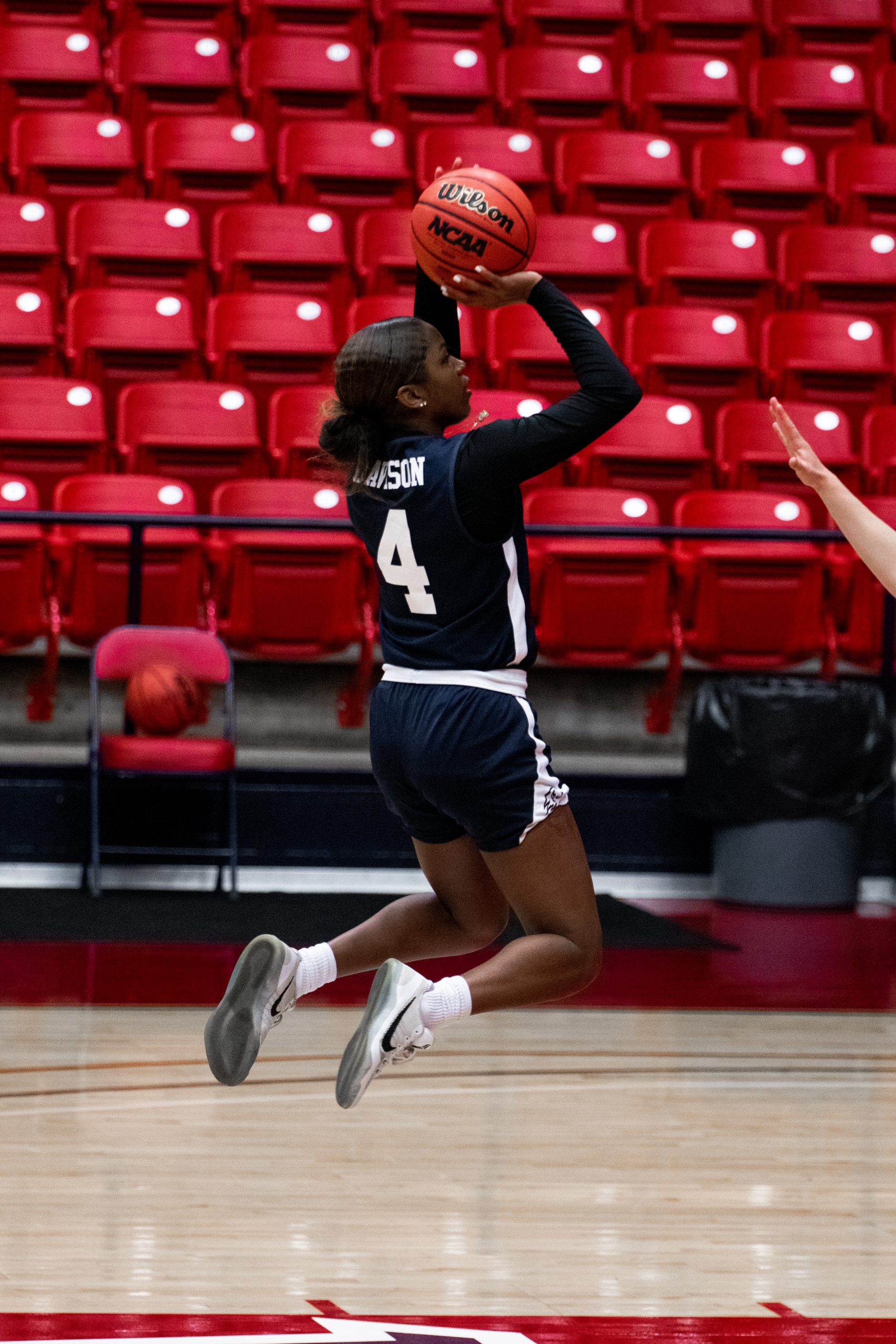 Shanaijah Davison goes up for a shot during practice. The DSU women's basketball team looks forward to their home opener on Tuesday November 9th against Life Pacific. Photo by Breanna Biorato.

Those key elements were taken away during the COVID-19 pandemic.

“It was definitely hard, not being able to feed off the energy,” said Jacob Nicolds, a junior business major from Gilbert, Arizona. “If you hit a big shot or make a big play you don’t get the reaction from the crowd, but our team did well in making our own energy last year.”

Dixie State University’s men’s basketball team played 17 out of 21 games in front of fans in its 2020 season. Men’s basketball was the first of the sports at DSU during the pandemic, which towards the end of the season was open to fans.

Without the noise of the crowd, however, it can be easier to communicate with team members and coaches.

Nicolds said one benefit was being able to communicate on defense.

“At times when a crowd is so loud it’s hard to talk or hear and it can hurt our defense.”

The women’s basketball team played three games before opting out of their season.

“We’ve been waiting to compete for almost 11 months now,” said Shanaijah Davison, a senior communication studies major from Vallejo, California. “We’re hoping that fans are just as excited as we are to come back.”

After 11 months of not competing, the lack of experience in playing against opponents was a concern.

“That’s a very real thing for my team, the lack of experience,” said JD Gustin, head coach of women’s basketball. “That is our number one struggle, but the only way you can overcome it is by playing games. Our inexperience is absolutely going to be a significant challenge for us.”

Hannah Robbins, a senior elementary education major from Nephi, spoke about how exciting game day can be.

“There’s nothing like gameday, we are super excited to get back into it and play a different opponent,” Robbins said.

The women’s basketball team will play their first game Nov. 8 at 7 p.m. in the M. Anthony Burns Arena against Life Pacific.

The excitement for the games and the returning fans was expressed by both athletes and coaches from men’s and women’s basketball.

“We are very excited to have the Stampede back in the arena and have them cheering for us and distracting the other team’s best players,” Nicholds said. “We returned a lot of key guys from last year so we have a chance to be solid.”