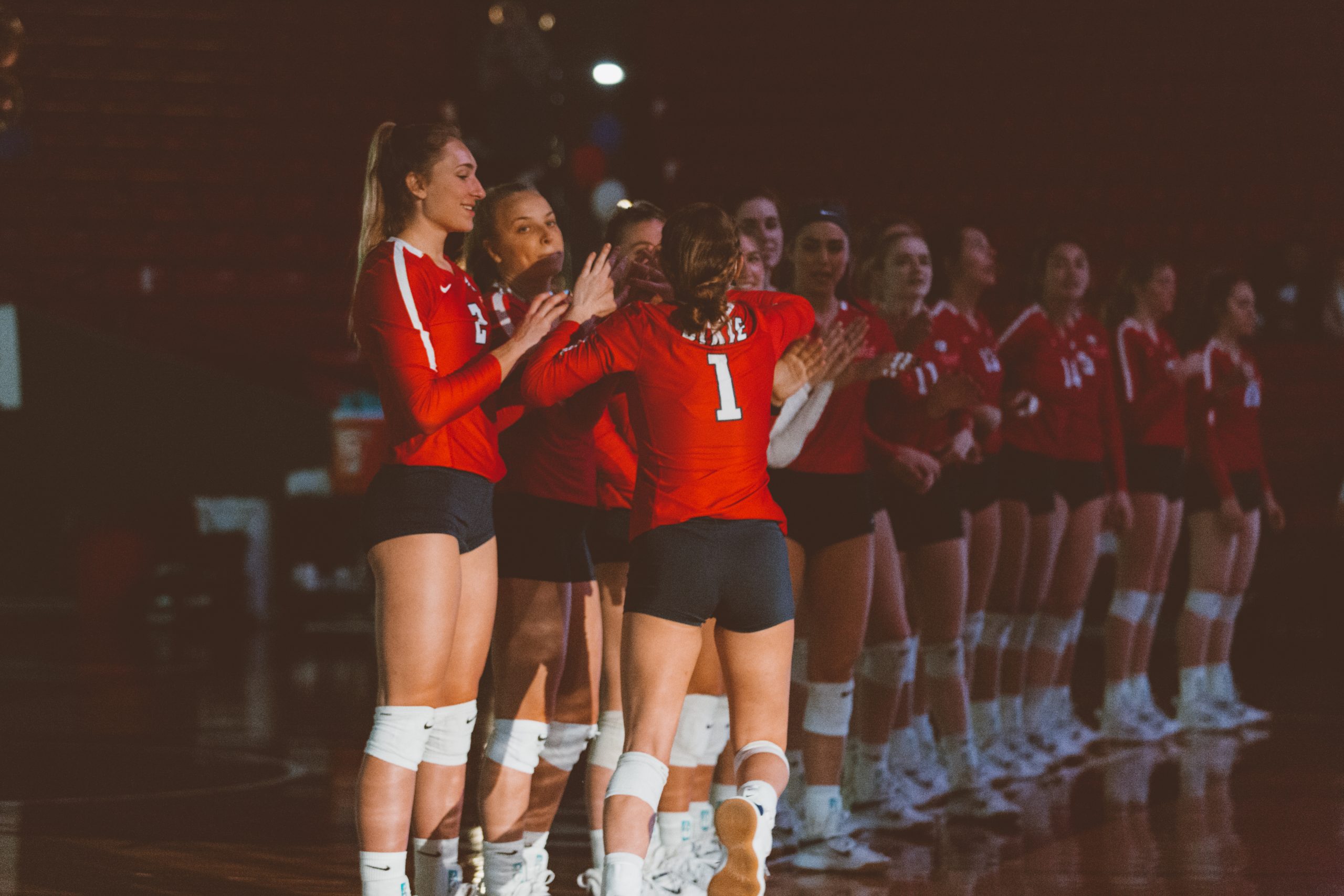 Jordyn Nelson, a senior medical laboratory science major from Phoenix, high fives her team before a match. DSU's student-athletes constantly have to balance school and athletics whether in or out of season. Photo by Emily Wight.

Students in college already seem pressed for time as they scramble to get assignments done on time and prepare for tests without cramming, but what is a day in the life of a student-athlete like at Dixie State University? How does this vary from a normal student?

Braden Bonner, a senior recreation and sports management major from Murray, never has a dull moment in his day. Bonner is not only a pitcher for the baseball team, but also has a bachelor’s degree in exercise science and is working for his second in recreation and sports management. Let’s look into the life of a pitcher and student-athlete during the middle of the baseball season:

Since Bonner has already earned a degree at DSU, he understands the way to structure his class schedule to accommodate this busy in-season schedule he faces.

“During the fall [offseason], I dedicate to getting my heavy schoolwork completed,” Bonner said. “I try to take the hardest classes then, when I know I can dedicate more time to studying and academics [as] opposed to the in-season schedule.”

With the goal of becoming a second-grade teacher, Hannah Robins, a junior elementary education major from Nephi, uses her time to practice preparing lessons and prepare for the next opponent she’ll face on the court.

“Our time is kind of limited [by the NCAA] when we are in the off-season because we aren’t able to practice as much as we do during the season,” Robins said.

During the off-season, the NCAA permits 8 hours of athletic activities per week, compared to 20 hours per week for in-season sports. Regardless of how many hours are allowed, Robins’ schedule is still full from sunrise to sunset.

Since both Bonner and Robins have a full schedule both in-season and during the offseason, dedication seems to be a must as they sacrifice hours of their day to their sport when it could be used doing activities other college students are participating in.

Kate Hardy, a freshman dental hygiene major from Fruitland, Idaho, carried a 4.0 in high school and was the Valedictorian for her class. A busy schedule was no shock for the middle blocker her freshman year; Hardy was always busy throughout her first year of college.

“The biggest difference for practicing in-season [as] opposed to the off-season is the traveling,” Hardy said. “When we would travel, I’d have to be doing homework on the road, and it would give us a day off between games. During the off-season, we didn’t really get off days.”

One would think practices would be less stressful during the off-season so players could recover and prepare for the next season, but this isn’t always the case.

“[Practices] were always intense in both the off-season and during the season,” Hardy said. “Our coach wanted us to make a good impression going DI this year, so we always went hard.”

College athletes are extremely busy year-round as they hope to either keep their position on the team or steal a starting position from a teammate. So how do they do it? What is a tip athletes give to help balance their schedule?

“I like to follow a schedule, so I don’t get lost during the day,” Hardy said. “I have a schedule and do my best to stick to it.”