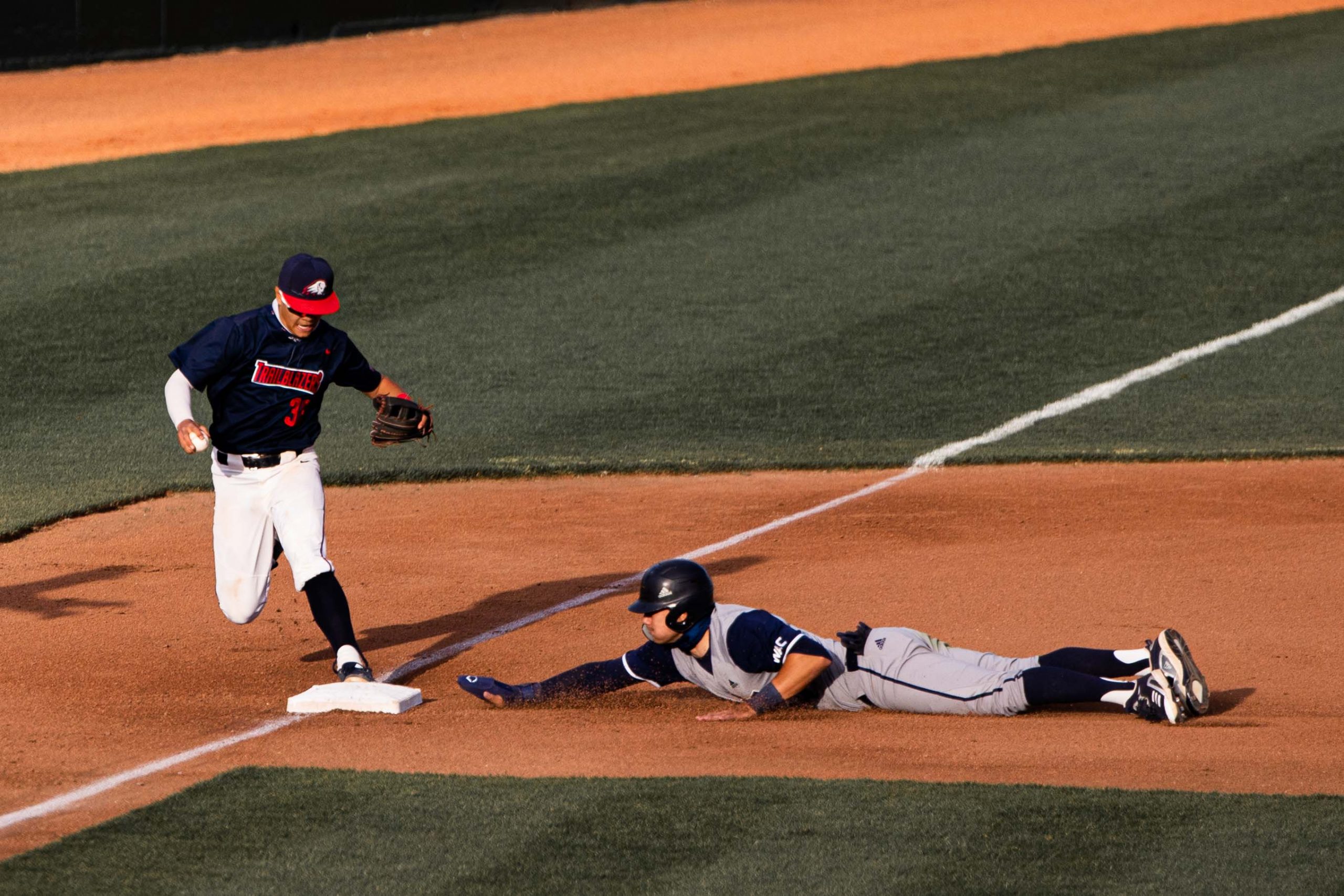 Shane Taylor, a freshman business major from Las Vegas, gets a force out at three as the Trailblazer takes on CBU April 16. The Trailblazers split the series with CBU. Photo by Breanna Biorato.

After being on the road for 11 out of 13 games, the Dixie State University baseball team was back home for a four-game series April 16-18.

This home series was different for the Trailblazers because it brought back memories to some of the older players on the team who took on former PacWest foe California Baptist University.

“In a way, it felt like we were in the PacWest playing [CBU] again playing them [on Friday],” pitcher Brayden Bonner, a communication studies major from Murray, said. “There were only a couple guys on the team that has actually played them that are still here, me included, [and it was surreal playing them again].”

DSU won games one and two against the Lancers by a final 3-1 and 2-1. The highlight for both victories was the phenomenal pitch by the Trailblazers. The DSU pitching staff only allowed 10 hits, gave up two runs, and tallied up 15 strikeouts through the two games.

“The starters gave us a chance, and then the relievers came in and did a knockout job,” head coach Chris Pfatenhauer said. “That’s the kind of games we want to play. When we were in the PacWest with [CBU], the scores were 3-2 or 4-1 and that’s how we want to play the game, and we’re getting there.”

Then CBU’s bats came alive for games three and four to claim both victories over the Trailblazers by final scores 4-7 and 8-14. The Lancers wracked up DSU’s pitchers with 32 hits, and eight hits going for extra bases, four of those hits being home runs.

Pfatenhauer said there were moments in both games when his players were leading the game heading into the sixth, seventh or eighth innings, but they let the game slip away.

Pfatenhauer said, “To lead all four games and put ourselves in a great position to not to just win the series, but to sweep the series, we just didn’t get the right hits in moments.”

Outfielder Lane Pritchard, a senior psychology major from Red Bluff, California, was the most consistent hitter for the Trailblazers by having .692 batting average, logging one home run and collecting two RBIS.

Pritchard said he found success throughout the series by staying disciplined and keeping a consistent pitching speed.

Despite dropping games three and four, DSU still gets the split over CBU, and it’s a big deal because the Lancers currently stand at No. 2 in the Western Athletic Conference.

“Coming out and getting a series split against the No. 2 team in the WAC right now is pretty good for our camaraderie and going into the couple of series,” Bonner said.

Even though the Trailblazers picked up two big wins over the No. 2 team in the conference, Pfatenhauer said he doesn’t want the series splits to continue being a trend for the team.

Pfatenhauer said: “We don’t want to start hanging our hat on splits [because] we were about winning series [and] obviously this year that’s been pretty tough for us, but we’ll take wins, and it’s always good to compete against [CBU]. They’re a really good program, they’re doing it right, and that’s who we want to be like.”

DSU will have a quick turnaround road trip on April 20 to take on Brigham Young University, as well as a three-game road series against San Diego State University April 24-25.