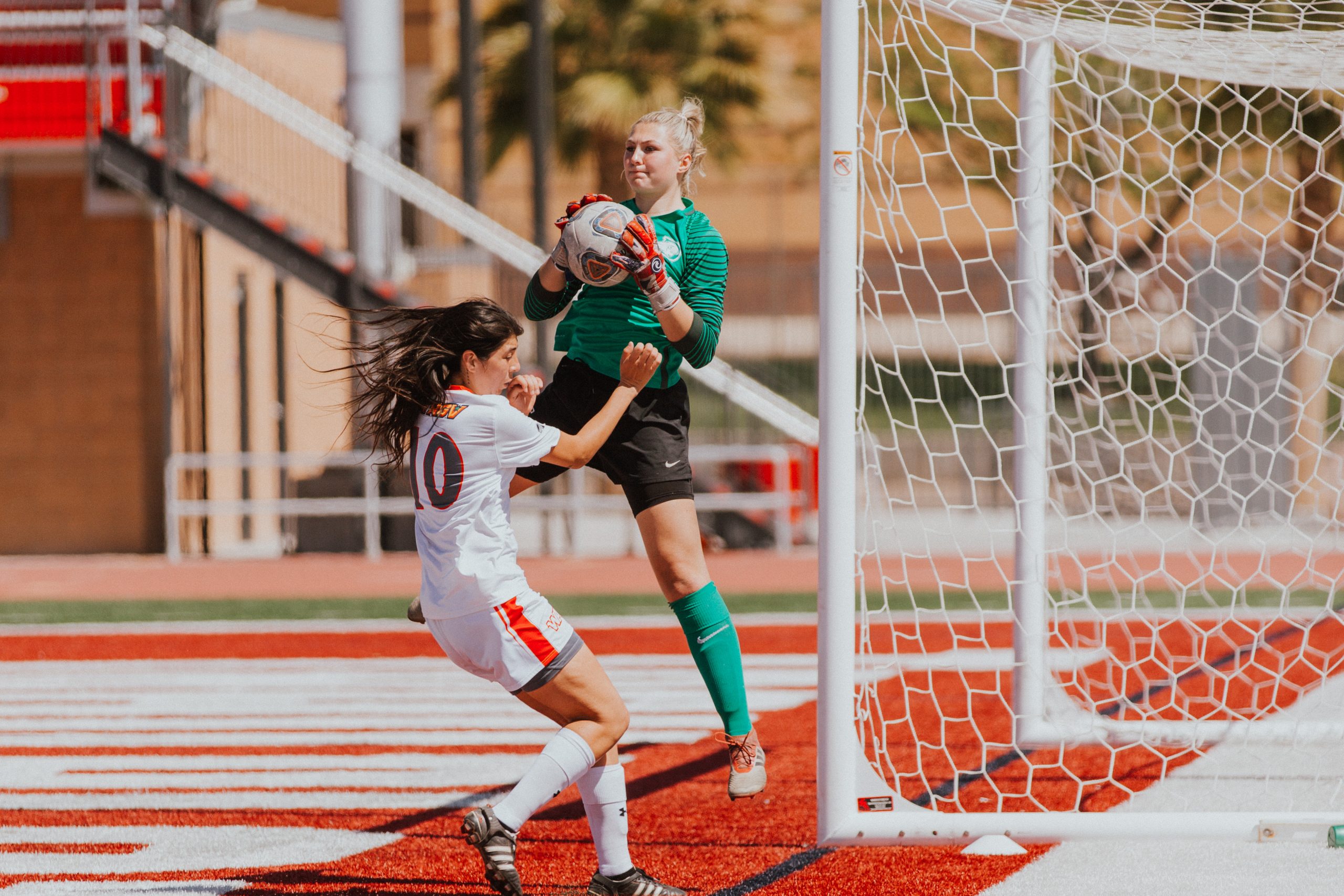 Goalkeeper Adelle Brown, a senior recreation and sports management major from Birmingham, England, makes a save in the second half against the University of Texas Rio Grande Valley. Brown came away with seven saves to help the Trailblazers defeat the Vaqueros. Photo by Emily Wight.

Greater Zion Stadium was filled with energy on April 4 for the Dixie State University women’s soccer team because it was thrilled to honor the seniors for senior day.

“The energy was good from the second everybody got here,” said forward Whitley Griffiths, a redshirt junior social science composite major from Gilbert, Arizona. “I think we all knew that we were ready to play and ready to get the win for our seniors.”

Head coach Molly Rouse said this year’s group of seniors has been the most resilient she’s worked with and she can’t speak highly enough about them.

Rouse said: “They’re the rock we can lean on, especially in hard times. They’re an amazing group that we’re lucky to have, and today was a great day to honor them.”

The Trailblazers had a tough task ahead of them taking on the competitive University of Texas Rio Grande Valley team. The Vaqueros currently stand at No. 5 in the Western Athletic Conference and are at No. 2 for most shutouts in the conference.

“They’re another great example of how competitive this conference is on any day,” Rouse said. “Any of the teams are going to be an absolute battle.”

Heading into the second half, the offensive pursuit continued, but UTRGV narrowed down its deficit to one with a penalty kick goal scored in the 57th minute of the game. DSU’s defense wasn’t fazed by the one goal and didn’t allow another goal, sealing the victory to defeat the Vaqueros 2-1.

Rouse said finishing the game strong was important for her team to help solidify the win over UTRGV because they’ve struggled maintaining the lead late in matches.

“We’ve been pretty good in our attack in most games, and we’ve created a lot of chances, [but] the hard part has been putting them away,” Rouse said. “Today was awesome to see a couple of people execute in the final third, creating some of the awesome chances that we did, and it was a fun game to watch.”

Goalkeeper Adelle Brown, a senior recreation and sports management major from Birmingham, England, said it was amazing to get a victory in front of her family and it was fantastic for the team to show out and prove it came to play.

The Trailblazers are coming down the final stretch of their schedule with one more home game against the Vaqueros and a rematch against in-state foe Utah Valley University.

Rouse said it’s crucial for her team to recover, watch the game film on UTRGV, prepare for game two against the Vaqueros, and play a No. 2 Wolverines team.

“What a way to end the season, to be playing against our in-state rival in the conference [and] be able to cap off this season full of growth,” Rouse said.

DSU will take on UTRGV April 6 at 11 a.m. at Greater Zion Stadium. Then the Trailblazers will square off against UVU April 10 in Orem.