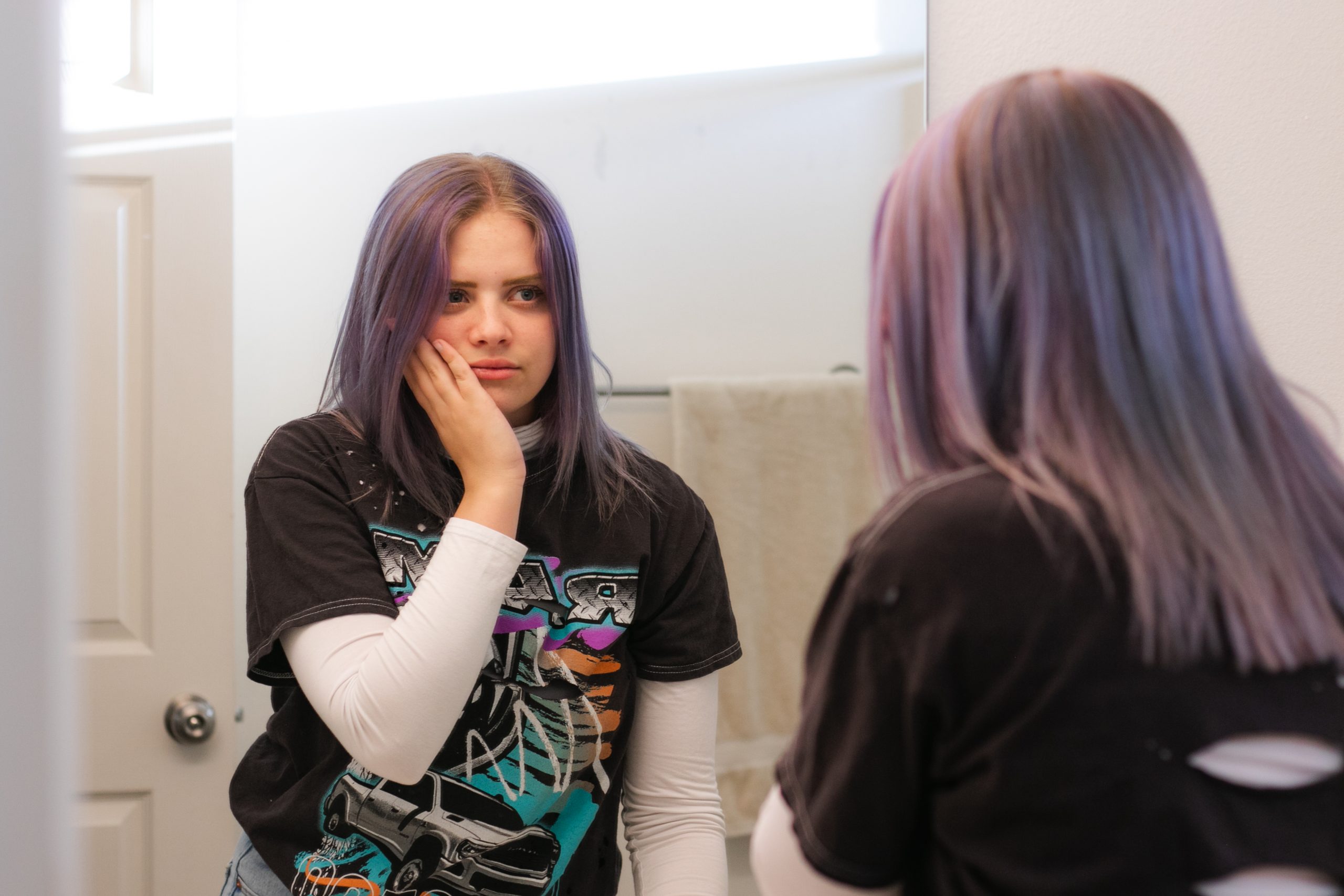 Tiffany Mortensen, freshman nursing major from West Jordan, focuses more on who she is rather than the toxicity behind glow up culture. Emily Mildenhall says Glow Up culture feeds on our insecurities. Photo By Bailey Chamberlain.

Glow Ups take the worst parts of diet culture, youth culture and consumerism and smash them all together to make a toxic monster that haunts our dreams at night.

Urban Dictionary defines a “Glow Up” as “a mental, physical, and an emotional transformation for the better. Glow Ups can be both natural or planned. As well as being gradual and permanent, or fast and temporary.”

It’s a cool concept, but let’s get real; who posts photos on Instagram of their newfound emotional maturity? In a society with visual values, there’s an implicit understanding that Glow Ups always have a visual component to them.

I should clarify that there’s a difference between putting work into yourself to make healthier life decisions versus throwing yourself into all the new beauty trends and comparing yourself to how models look.

There are infinite ways to Glow Up, although the vast majority of people who have them — or at least post about them on social media — are women who change their appearance. The internet is obsessed with women looking thin but curvy, flawless but natural, and sexy but innocent. It’s no wonder that this trend is blowing up right now; nothing is ever enough, is it?

While beauty standards affect men, women and everyone in between, women who are perceived as unattractive make less money than their attractive counterparts. It affects everyone mentally, but disproportionately affects women financially.

Beauty advertisements also target women much more often and they’ve been doing it for decades. Old cartoons that depict women before and after using X products are just the 1950s version of modern day influencers peddling skin creams for acne and anti-cellulite leggings.

What is up with the internet’s obsession with making drastic and immediate visual changes to women’s bodies? I, for one, wish Instagram models would shut up about how easy it is to get a snatched waist if you just buy this detox tea and follow this simple exercise routine.

When it comes to profiting off insecurity, the beauty and diet industries are really raking it in. Think about it; the entities that benefit the most from our insecurities are the ones that sell the “solutions.”

Do you feel marginalized and ignored by society because you don’t perfectly fit the current beauty standards? Buy these items and purchase this program and soon you’ll look completely different. You wouldn’t want to get caught looking like — gasp — yourself!

There’s so much more to Glow Up culture than the damage it does to impressionable youth who don’t have fully formed self-concepts yet. Of course you weren’t “sexy” when you were in middle school — you were a child. So what’s the deal with the folks posting pictures of their 13-year-old selves and saying, “Thank God I don’t look like that anymore!”

I get that Glow Up is a play on “grow up,” but this whole ugly duckling mentality crumbles under actual analysis.

We all remember that story, right? The one that teaches children that it’s OK to be ugly as long as you grow up to be beautiful? The Ugly Duckling was really the original Glow Up when you think about it.

The tough truth is that we’re not all going to end up as swans. Moreover, waterfowl aren’t bombarded with ads about how to make their feathers softer or quick and easy beak procedures.

“Glow Up culture is a capitalist plague that feeds off our insecurities and you can’t convince me otherwise. Don’t buy into it.”

I struggled with eating disorders for years. Teachers and classmates who knew me in middle school complimented me in high school after my weight loss. As a teenager, I learned that my peers didn’t see me as a human being until after my Glow Up.

Being thinner and more focused on fitting the acceptable look only made the pressure to be pretty worse; my obsession with my body made me scrutinize other things like the thinness of my eyebrows, the lack of volume in my hair, the shape of my nose… It’s a chain reaction that can go on forever if left untreated.

I’m done giving money to industries that count on my self-doubt to make a profit and I’m encouraging everyone to do the same. The most punk rock thing we as women can do is place sisterhood before the male gaze and end this toxic trend.

Glow Up culture is a capitalist plague that feeds off our insecurities and you can’t convince me otherwise. Don’t buy into it.

Just because it has a cute name doesn’t mean it’s harmless.