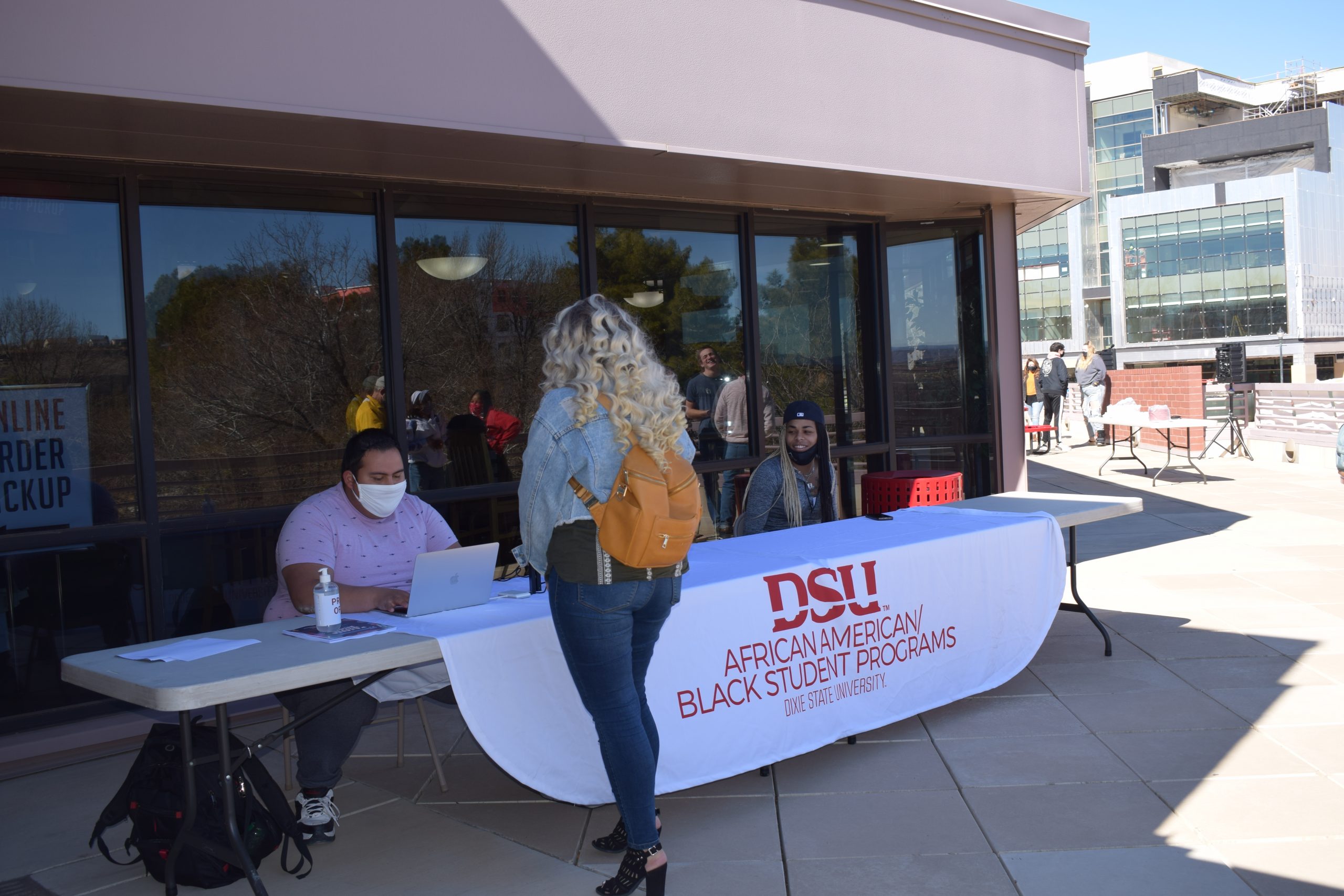 Dixie State University’s Multicultural and Inclusion Center hosts an event for Black History Month to teach students more about Black history. Yasel Avalos says people should not be angry over the celebration of Black history. Photo by Bailey Chism.

Those who are getting angry over giving those who have been historically enslaved, defamed and tortured over the amount of melanin in their skin a month to share their history — American history — share the same sentiment as KKK members.

We see history repeat itself time and time again in terms of when the KKK is strongest in numbers. It started with the 1915 film “The Birth of a Nation,” which sparked Black hate across the country, then membership dwindled. KKK crimes rose once more during the Civil Rights Movement, in what was seen as a direct response to those fighting to end Jim Crow segregation laws. Ever since, the KKK has kept up with trying to spread its hateful ideology like a four-year-old holding onto its favorite color crayon, except a four-year-old does not commit murder if someone says their color of crayon is not superior.

The importance of Black History Month is to highlight Black figures and their accomplishments to show that yes, Black Americans have contributed to society, they are educated, and they are successful. Why is it important for all Americans to celebrate and know this? Because we do not teach Black history and their contributions or atrocities committed against them in our educational curriculum.

Jane Elliot, educator and diversity trainer, said: “Any white person who was born, raised, and schooled in the United States of America — if you are not a racist, you’re a miracle. Either that or you decided to educate yourself, because education in this country is about white is right, brown’s alright, black has to stand back.”

Black History Month was officially recognized in 1976 by then-President Gerald Ford to “seize the opportunity to honor the too-often neglected accomplishments of Black Americans in every area of endeavor throughout our history.”

Every U.S. president since then has regarded February as the designated Black History Month we know today.

Now begs the question you want to hear answered: Why do people who disapprove of Black History Month share the same sentiment as the KKK?

For the KKK, any attempt to debunk their idea of white supremacy is seen as a threat. Showing Black American accomplishments is a threat to the KKK because acknowledging all the things that Black Americans have done in the U.S. directly contradicts what they believe.

In the summer of 2020, the Black Lives Matter movement gained traction over the death of George Floyd. Those who chose to oppose the movement — mostly extremist Republicans — by saying “all lives matter” or “blue lives matter” are the same majority who voted for former President Donald Trump. Those individuals have the same mindset of those who go on to request their kids be opted-out of the Black History month curriculum. The director of the school who allowed this said he wanted to let parents exercise their civil liberties, then later reversed the decision.

Many aspects of the Republican ideology mirror that of the KKK. Both value traditional, Christian, conservative views. Both are anti-immigration, tend to be more homophobic and transphobic than Democrats, have an issue with Black History Month, and voted for President Trump, who has embraced the Proud Boys and has failed to condemn white supremacists, in the 2020 election.

A majority of Republicans wish to assure that there are no ties between their party and racism, and plenty of them say, “Democrats founded the KKK,” but the Democratic Party did not. The overwhelming support for Democrats before the ‘60s from racist white supremacists stemmed from the Jim Crow laws put in place at the time. During the ‘60s, the change in political demographic with the Civil Rights Movement led the Republican Party to begin catering to white supremacists as the Republican ideology changed. David Duke is a prime example, as he is an active member of the Republican Party and former grand wizard of the KKK.

Some of you will say “not all Republicans hate Black History Month,” and while each individual has their own thoughts, the Republican Party has now historically shown ties to the KKK. Remember the incident at Capitol Hill when Trump’s Republicans stormed the building waving white supremacist flags?

You should not be angry over a 45-year tradition celebrating Black accomplishments when most of U.S. history has contributed to nearly 400 years of Black Americans’ enslavement and oppression. Instead, learn from from Black History Month and embrace it.