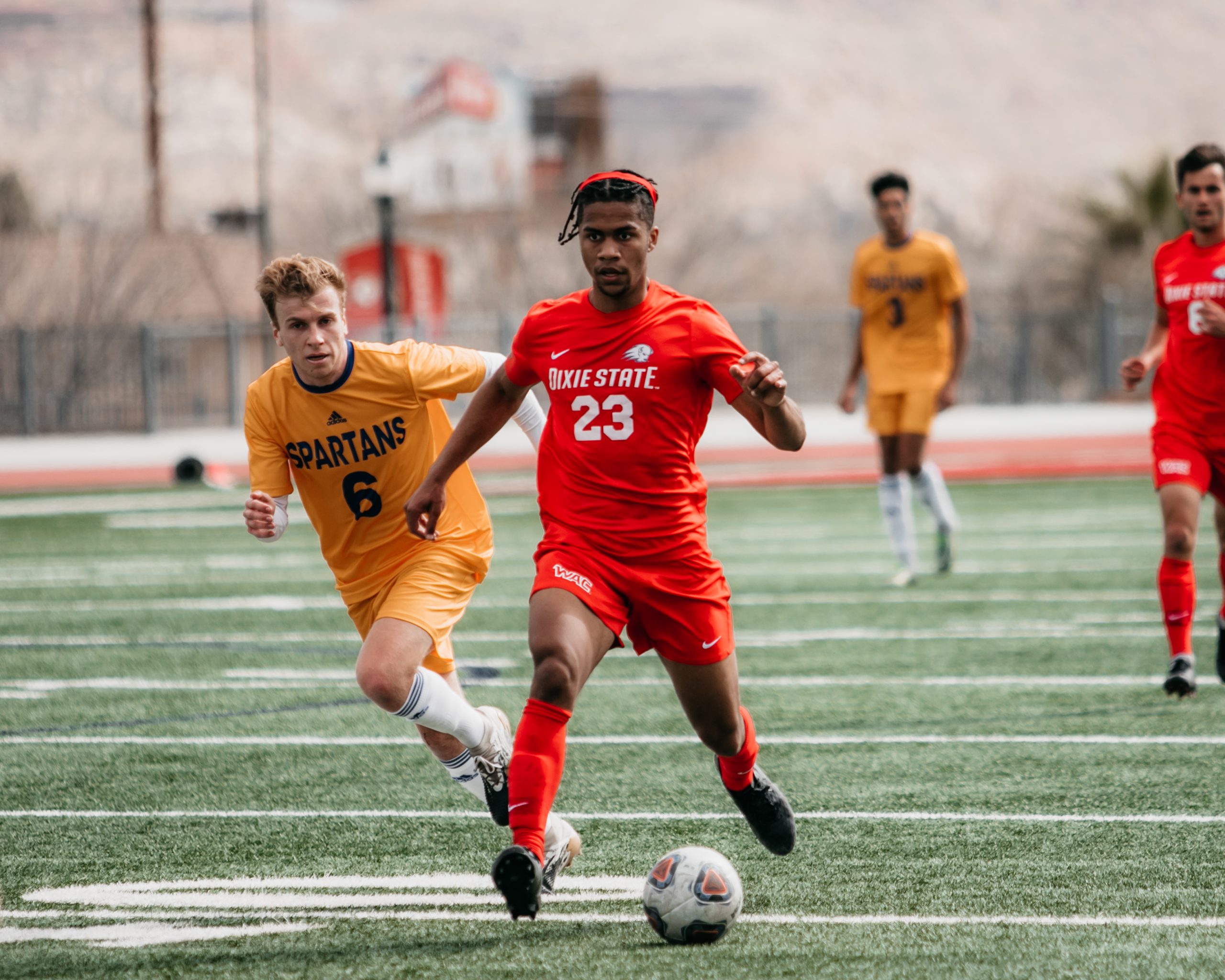 Idris Alabi, a redshirt junior biology major from Vail, Arizona, scored the only goal for the Trailblazers in its 2-1 loss to SJ State. This is the first goal scored by DSU in its 2021 season. Photo by Bailey Chamberlain.

For Dixie State University’s men’s soccer team, its showing against San Jose State that resulted in a 2-1 loss was the tale of two halves.

DSU came out on the front foot in the first half, despite starting three freshmen and two sophomores, and played a clean first half. The team played a flat 4-4-2 for most of the half and defended strongly against a more experienced SJ State team.

“It’s nice to come out strong, and they did in [the games versus SJ State and Airforce],” head coach Johnny Broadhead said. “Today we were even able to get a goal.”

The Trailblazers’ lone goal came off the foot of captain Idris Alabi, a redshirt junior biology major from Vail, Arizona, in the 14th minute.

“It’s good to get that monkey off our back,” Alabi said. “We didn’t get any goals last game, so it felt good, but we wanted more.”

“In the second half, we wanted to try and press them because we knew they were going to try and press us, and for the most part, it worked,” said Matt Lockwood, a junior nursing major from West Jordan. “I really felt like some guys got fatigued today and it really showed in the last 15 minutes.”

The fatigue did show, as the game got more and more chippy as the 90 minutes wore on. Three Trailblazers would see yellow card cautions in this one: One to redshirt midfielder Niko Shumov, a junior marketing major from Keaau, Hawaii, in the 69th minute, one to Alabi in the 77th, and the final one to forward John Joseph, a sophomore design major from Richmond, British Columbia, in the 78th minute would be the most controversial of the night.

SJ State defender Eduardo Miranda and Joseph had been going back and forth most of the night; a shove in the back from Miranda following some verbal altercations led to both players being shown yellow. The game got even more physical from there.

Then, in the 79th minute, just seconds after the altercation, the Spartans would find a goal to draw the game level at 1-1. The Trailblazers’ defense couldn’t handle more pressure from the Spartans.

“Credit to San Jose,” Broadhead said. “They deserve the moments that they created; they had a lot of the ball.”

Once the Trailblazers’ defense broke, it would take just six minutes for SJ State’s Nicolas Brenes to find the winning goal in this one. SJ State was able to score two in the second half, while DSU failed to even register a shot on goal after the halftime break, a trend the team is starting to see.

Broadhead said this game against SJ State showed how the team seems to be taking things one step at a time. Against Air Force, the Trailblazers played a clean but scoreless first half, didn’t get a shot, and gave up goals. Against SJ State, they added in a goal but still could not stay focused in the second half.

Lockwood said he recognizes that some of this comes with experience, but at the end of the day, he knows his team is strong and capable of doing more; it’s just a matter of time.

“We know it’s going to be a hard season,” Lockwood said. “We’re young and newcomers to the WAC, but [the team knows] you’re going to have to grow up fast if you chose to come [to DSU].”