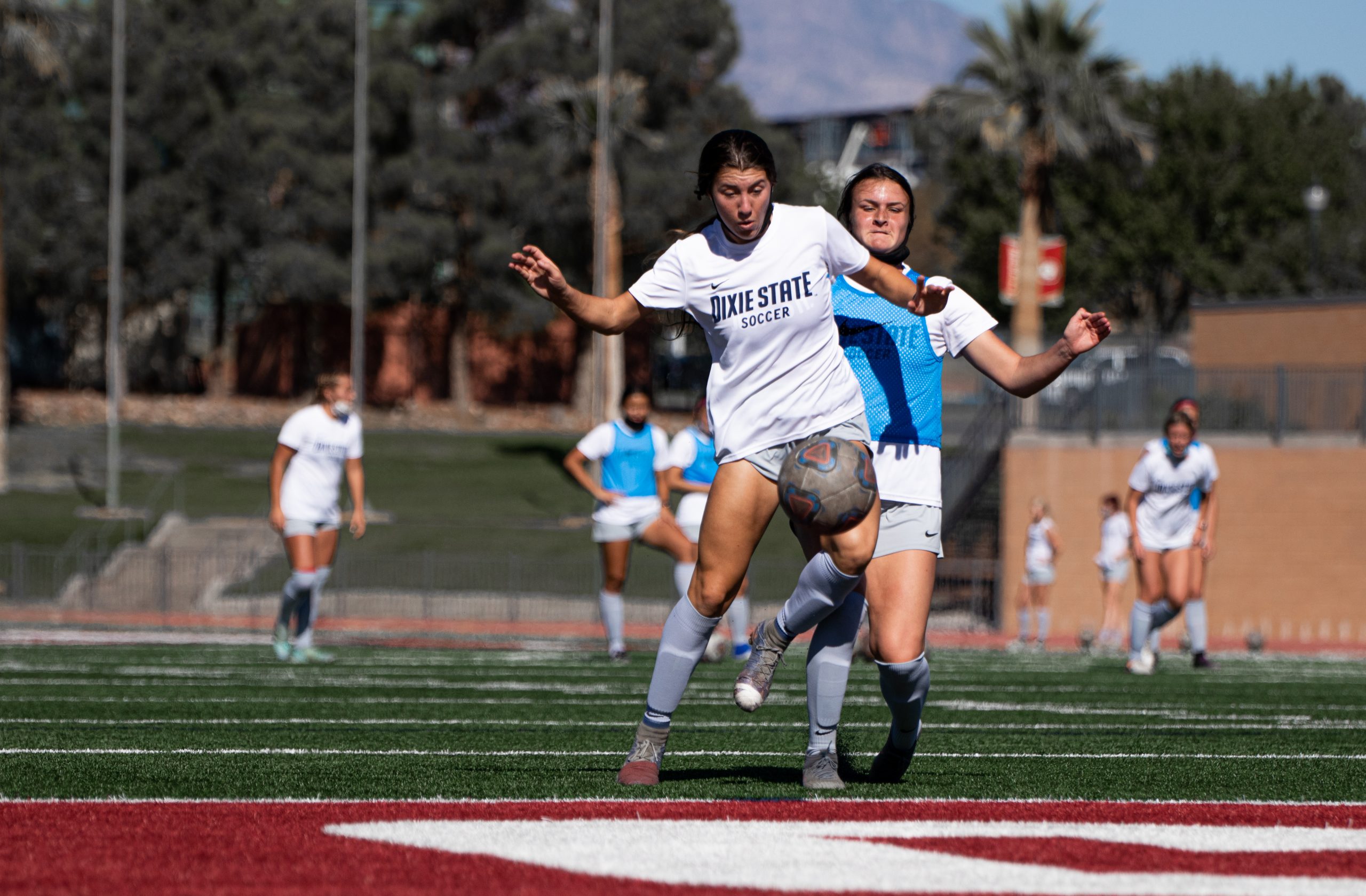 Mckinley Barney, a freshman accounting major from Mesa, Arizona, and Kearney Hoggan, a freshman general studies major from Eagle, Idaho, take on the field in preparation for the upcoming spring season. Women’s and men’s soccer schedules have been released. Photo by Breanna Biorato.

The first-ever Division I soccer schedules are out for the Dixie State University men’s and women’s soccer teams.

The DSU men’s soccer team will start its slate with a home game against Air Force on Feb. 6. Then, the team will take a trip to California Baptist on Feb. 13 and come back home against San Jose State on Feb. 16. DSU men’s soccer has an alternating home and away schedule each weekend for the entirety of its season.

The team will go away again to Incarnate Word on Feb. 27 to build up to the big home game against Seattle U on March 6. These first few games have the potential to be cold with questionable weather, but men’s head coach Johnny Broadhead said he isn’t worried.

“I don’t really care if it’s perfect weather or crummy weather because once the whistle blows, we get to play a game,” Broadhead said.

After the home Seattle U game, the team will head to Orem to face Utah Valley University on March 13, a team that is already brewing a rivalry with DSU. Broadhead said he is excited about having a men’s soccer rivalry in Utah. He didn’t get to experience these rivalries as a player, so he’s happy to see soccer’s growth in Utah creating opportunities for them to start.

After the big UVU game, the team will host Houston Baptist on March 20. The team will then head to Phoenix to face Grand Canyon University and host UNLV on March 31 before wrapping up the season with a tough trip to Texas to play the University of Texas Rio Grande Valley.

With former high school and club teammates at schools around the WAC, players can connect with the teams they’re playing. Broadhead said he hopes these connections will help get more people invested in the men’s soccer program.

“A lot of these guys played with each other in youth [soccer], and they got separated in college and now get to play against each other again,” Broadhead said. “All those kids, anytime we play any of those schools it’s going to be exciting.”

Women’s soccer hopeful to build on back to back games

For the first time in its history, DSU women’s soccer will play six weeks of double game weeks, where both games are against the same school. The team will start off its season with two away games against California Baptist on Feb. 18 and 20.

The team will then come home for a four-game homestand with games against GCU on Feb. 25 and 27, then Seattle U on March 4 and 6.

The team will then head to Chicago State for two games on March 11 and 13. Similarly to men’s soccer, there is the potential for some cold games, especially in Chicago in March. Women’s head coach Molly Rouse echoed Broadhead’s thoughts, though her team is just grateful to play again.

“We’re really excited just to have games at home in the calendar year,” Rouse said. “We’re in a really good pocket of space for our home games, so those aren’t super concerning, and anywhere we’re traveling to that weather maybe could be an issue, other schools have dealt with it the whole time they’ve been in existence.”

On March 20, the team will head back home to play UVU before a road trip to New Mexico State University with games on March 25 and 27.

After the trip to Las Cruces, the team will host UTRGV on April 1 and 3 before rounding out the season with an Orem trip to play UVU on April 9.

With the format of playing the same team twice in a weekend, Rouse said she is hopeful her team will use this opportunity to develop its game in a short period. The ability to play a game, make adjustments, then do it again two days later is something Rouse and Brown have never gotten to do before, and they are excited about the idea.

“We’re choosing to see [it] as an opportunity to learn and grow on a weekend,” Rouse said. “You don’t ever really have the opportunity to play a team, review how you did and make any sort of tactical adjustments [that quickly]. In soccer that doesn’t happen very often. So, we’re really excited about the developmental opportunity we have for the team.”

Overall, the DSU soccer programs are optimistic about the changes this spring season is going to bring. Both players and coaches recognize the difficulties and changes that will have to be made from a regular season, but have faith they will still compete well.