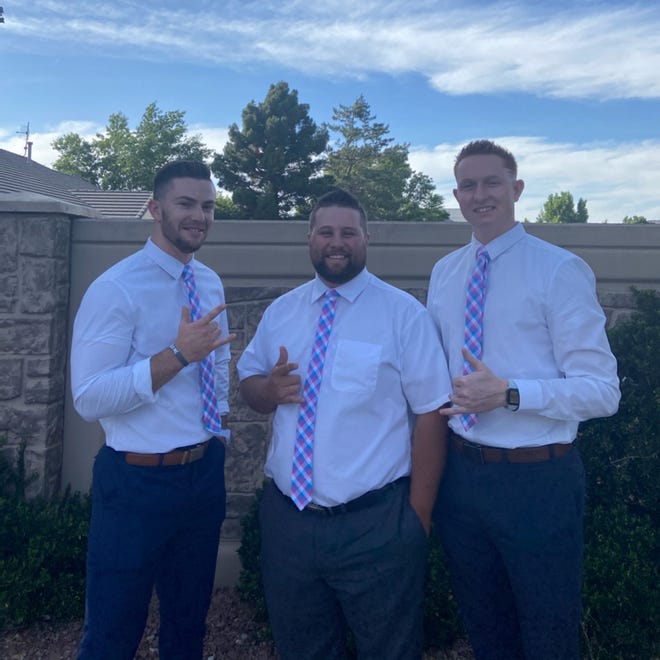 DSU football head coach Paul Peterson has preached about the importance of community involvement for his team, and his team has taken this to a whole new level in the last month.

On August 7, the DSU football team anticipated a team trip to Dixie Rock to for a meeting between coaches and players to talk about the season they were preparing to play. As the team waited for coach Peterson to address the group, though, DSU’s offensive coordinator Kelly Bills realized commotion on the cliff’s side.

A woman had gotten herself stuck to a rope while climbing the cliff and was unable to get back up.

“There were a couple people laying on their stomachs looking over the edge of the mountain,” Bills said. “That’s when I ran over and all of our guys congregated over there… I think it was around four and a half minutes of the final pull of when we got her back up the mountain.”

Just over two weeks after the incident at Dixie Rock, DSU football players were once again playing hero, only this time for a girl stuck under her car amidst a flash flood.

On August 23, what students thought would be a typical rainstorm quickly turned dangerous as it turned into flash flooding. DSU football, once again, found its players being in the right place at the right time to help someone in need.

DSU football player Kaleb Hatch, a sophomore business major from El Paso, Texas, and his roommates, were trying to help people get themselves and their belongings out of flooding apartments when Hatch’s teammate, Mo Tuileta, began calling for help from across the street.

“Me and my two roommates ran over, and sure enough, we realized that the young lady was completely submerged underwater and that we had to lift the car to get her out,” Hatch said. “We were trying to lift, but we couldn’t necessarily get her out right away.”

Hatch said assumes the woman was pinned against a tire, which caused her to be stuck. After nearly five minutes of trying to lift the car, they were finally able to get the car up and get her out of the water.

“We were lucky the fire department had just pulled up right as we pulled her out,” Hatch said. “So it was probably about a 15 second handoff between when we got her out of the water and handed her off to the firefighters.”

The woman went to the hospital, and the next day Hatch, Tuileta and Hatch’s roommates found out the woman had survived and was in stable condition.

Bills attributed his team’s heroic acts to merely being in the right place at the right time, but believes his team’s mindset is something special, and its ability to act when called upon is something instilled in his team each day.

“It’s really just the everyday values that we preach to our guys,” Bills said. “Showing up on time, finishing, hustling, going to class, helping on campus, being a good example; those values that we instill every day, they just carry over into their everyday lives.”

Peterson said that his team’s continued quick action in these situations isn’t surprising. His team is full of good men, and he knows that. Whether it’s saving lives or just giving back to the community, DSU football takes whatever opportunity to help out.

“That’s just what we do,” Peterson said.

In addition to helping save a woman’s life, the DSU football team also helped to clean up the rocks and dirt out of the roads the day after the flash flooding occurred.

DSU football plans to continue their community involvement by trying to do something in the St. George community at least once a week. Peterson has plans to help clean up the city from the flooding again and wants to get into the classroom with his team and read with kids in the elementary schools.

“We’re trying to lift up the community the best we can because they lift us up all the time,” Peterson said.