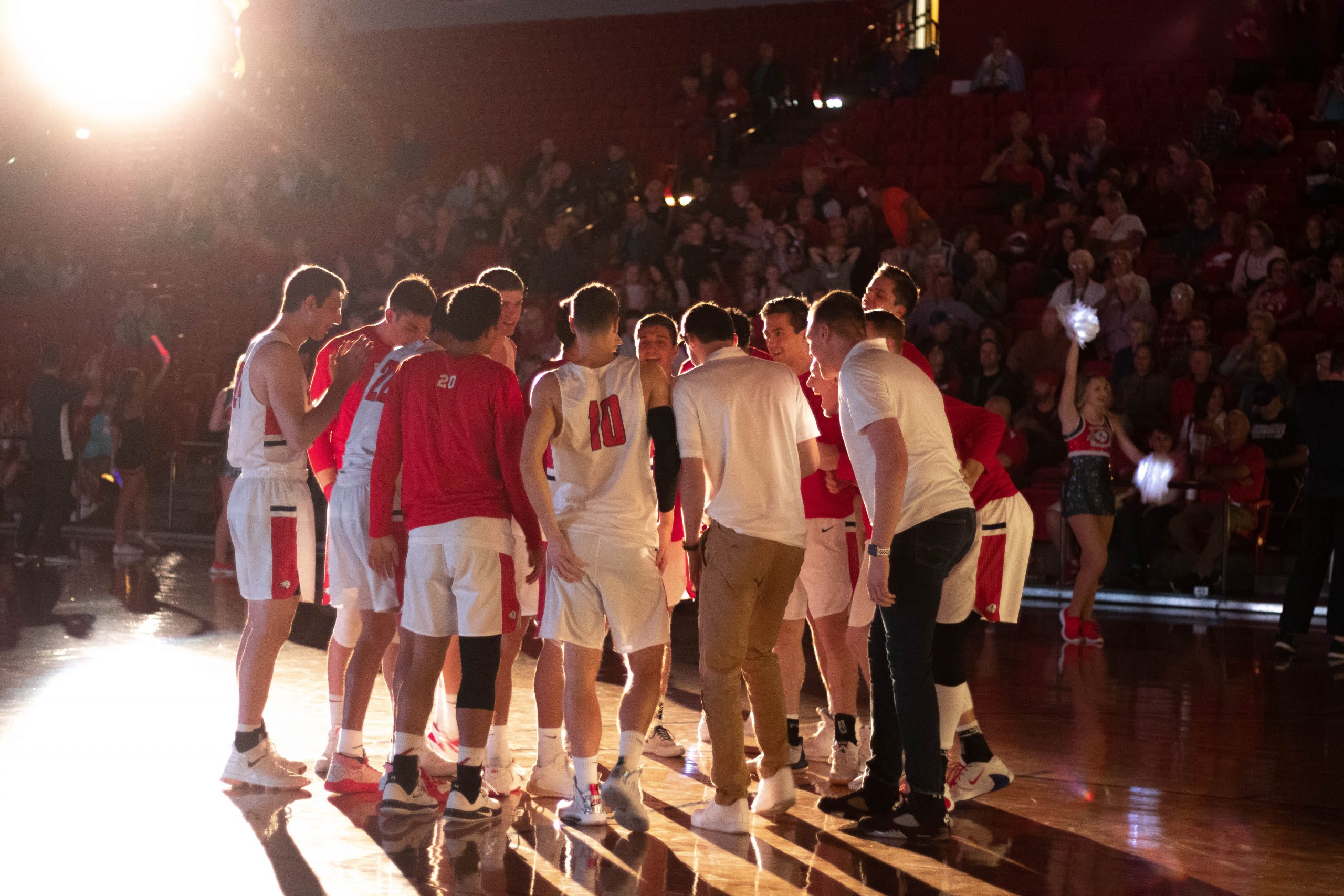 A staggering loss for the No. 1 seeded Dixie State University men’s basketball team was taken down to No. 4 seed Colorado Mesa University on Mar. 6.

The Trailblazers were booted out of the semifinal round of the Rocky Mountain Athletic Conference tournament, which they hosted.

Head coach Jon Judkins said the team couldn’t take advantage of the good crowd and having home court to its favor. He said he gives a lot of credit to the Mavericks for coming out and playing extremely hard.

“It seems like the last time we played [CMU] it has been a fight all the way to the end like it was again tonight,” Judkins said. “I thought they were more physical than us, tougher than us [and] we didn’t play one of our better games.”

When the first half began, the Mavericks started the game out with a little bit of authority with a dunk over forward Hunter Schofield, a junior exercise science major from Spanish Fork.

CMU had an early five-point lead over the Trailblazers within the first four minutes. To answer back, Schofield scored DSU’s seven out of nine points to cut the Mavericks lead to two points.

Schofield said he wouldn’t let one play determine how the rest of the game was going to go for himself and the team.

Schofield said: “They had that one good play, they got the energy going so, what are we going to do now to respond and get our team going. We had to go down, play hard, get back, start something at the defensive end and getting stops the next time down the court.”

From that moment forward, the Trailblazers and CMU went back and forth exchanging bucket after bucket. The Mavericks closed out the first half with the small edge over DSU with a 41-37 lead.

The start of the second half was rough for the Trailblazers. CMU stretched its lead out to thirteen points with less than 12 minutes to go in the second half.

Guard Jack Pagenkopf, a senior business administration and management information systems major from Brooklyn, New York, took the game into his own hands. Pagenkopf scored seven points out of a 12-2 run that he led to shift the momentum towards DSU’s side to get his team back within one-basket possession and giving the home crowd life.

The Trailblazers kept getting called for fouls late in the game which the Mavericks took full advantage of to put the game out of reach and make the final score 86-79.

Pagenkopf scored a new career-high in points with 32 points and Schofield became DSU’s NCAA-era single-season scoring leader with a total of 492 points.

Schofield said what he accomplished was cool, but he was mainly focused on trying to win the game.

Judkins said the team depended too much on Pagenkopf to bring DSU back into the game and when Pagenkopf was being double-teamed during the game, his teammates would just watch him.

“We have to have somebody else step up,” Judkins said. “We got to do a better job of wanting the ball. We roll or we pop and we got to want it.”

Pagenkopf said he tried to pass the ball as much as he can, but he had to make a play because the team was down and right on the edge of taking the lead. He said he didn’t want to lose at home, especially in front of one of the largest crowds the team has had this year.

Pagenkopf said: “It’s too bad that we didn’t win, but it was getting loud [inside the arena] for a good portion [of the game]. I thought we were going to make a run. We had it down to one point a couple times it seemed like, but we couldn’t get over the hump, which was frustrating.”

With the loss to CMU, this marks the last time the Trailblazers will compete in the RMAC.

Judkins said the team wanted to leave the RMAC on a strong note by winning the RMAC tournament.

Judkins said: “I’m proud of [my team] for winning the conference. That’s something that these guys will never forget, but now we don’t play here anymore, we’re done. The RMAC has been good, it’s been a good conference.”

Although DSU is done playing in the RMAC, the Trailblazers still have an opportunity to receive a bid to get into the 2020 NCAA Division II Men’s Basketball South Central Regionals.

Pagenkopf said it’ll be another chance for himself and the team to keep playing and not end its season on a frustrating note at home.

“We’ve had a pretty good season,” Pagenkopf said. “We’ve had some bad losses; I think sometimes our biggest look in the mirror moments is what helped us [bounce back] and this better be one of them.

DSU will see if they make the South Central Regionals on March 8 at 8:30 p.m. on the NCAA DII Tournament Selection Show on NCAA.com.