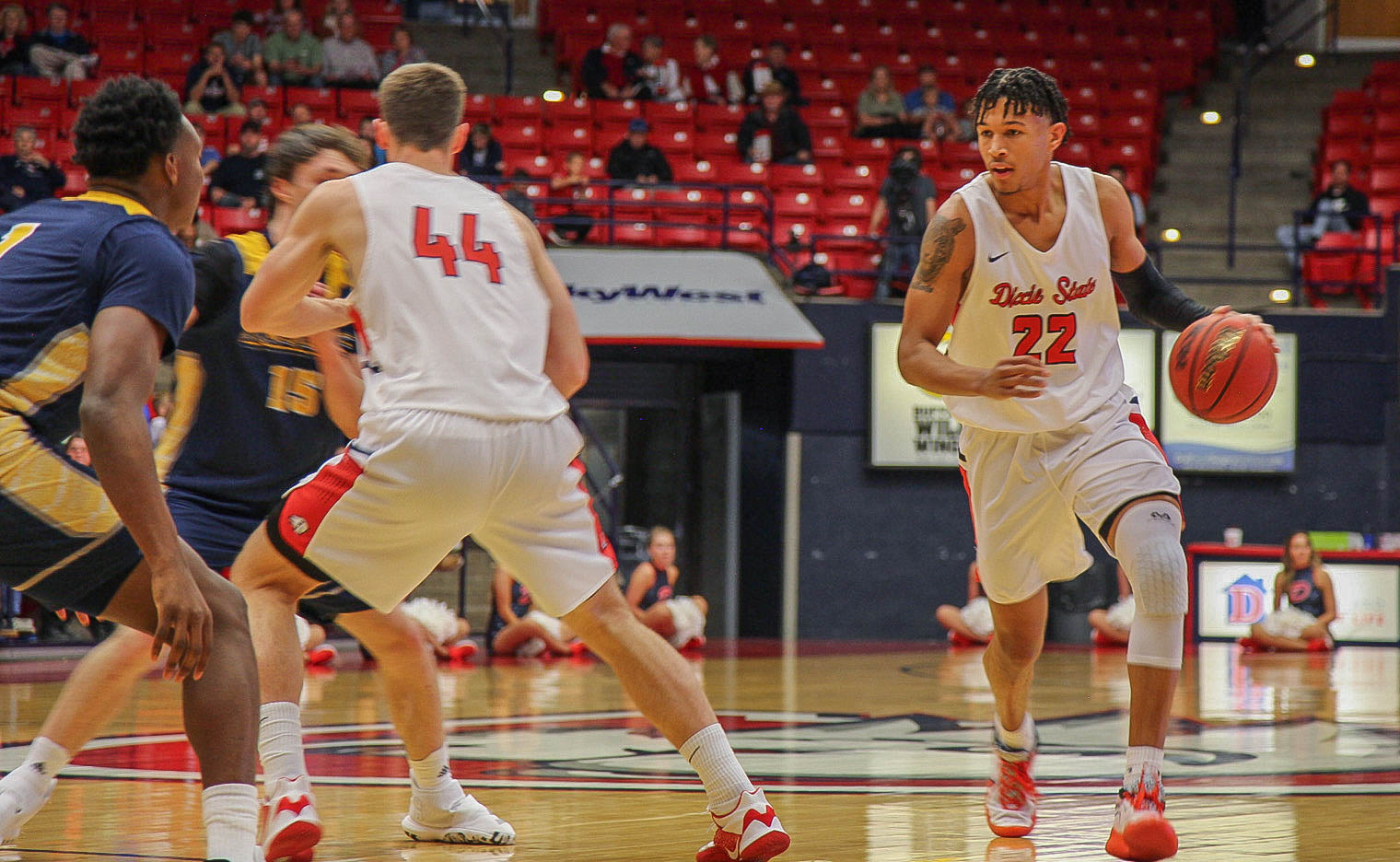 Frank Staine, a finance major from Inglewood, California, makes his way down the court on Mar. 3 in the Burns Arena. The Trailblazers took the win against Regis and will continue on through RMAC tournament on March 6. Photo by Jessica Johnson.

The Trailblazers were focused on proving to the rest of the RMAC they’re the best team in the conference.

Head coach Jon Judkins said: “They’re hungry and mad that they lost those two game a couple of weeks ago that could’ve given us the outright [RMAC] championship. So, they want to prove it to somebody.”

During the first half of the game, DSU jumped out to a 27-17 lead over the Rangers with six minutes to go. Almost two minutes later, RU went on a 10-2 run to make the score 29-27. The Trailblazers closed out the first half with a run of their own extending their lead to 36-31 at halftime.

Schofield said the energy was up and down throughout the first half. He said the team would have good energy, have a lead, and they got too comfortable leading the Rangers back into the game.

Heading into the first five minutes of the second half, DSU would have another hot start led by forward Frank Staine, a freshman finance major from Inglewood, California, who popped off for seven points extending the Trailblazers’ lead to 49-36. RU flipped the script on DSU and they went on a 22-10 run to cut its deficit down to one point making the score 56-55 with eight minutes to go in the game.

Guard Andre Wilson, a senior recreation and sports management major from Moreno Valley, California, hit a clutch three for the Trailblazers to give DSU some momentum. As the game winded down, Schofield and Wilson combined to make 14-17 free throws to put the game away for the Trailblazers and defeat the Rangers 84-71.

Two technical fouls were called late in the second half and Wilson knocked down six of the fourteen free throws to help ice the game.

Wilson said knocking down the key free throws was a lot of pressure. To keep his composure, he imagined himself at practice, taking a deep breath, being relaxed and made his free throws like he was at practice.

Judkins said Wilson’s clutch three-pointer was huge, he had a great flow and gave kudos to his leadership.

Judkins said: “[When] [Staine] turned the ball over right in front of the bench, a lazy cross-over, we got mad at him and Andre is over there saying ‘hey it’s ok, it’s ok. Let’s move to the next play. We can do this; we can do this.’ Him and Jack [Pagenkopf] were leading like crazy tonight on the court and on the bench. As a coach, you love that.”

Judkins said what made RU a difficult team to beat is the fact the Rangers are a lower seed, they have nothing to lose and the pressure was on DSU.

“We tried to get that off us,” Judkins said. “We tried to say ‘Hey there’s a reason we’re playing here. Let’s go out there and do what we need to do.’”

With the win over the Rangers and being the highest remaining seed, the Trailblazers will host the semi-finals and finals of the RMAC tournament.

Schofield said the team loves playing at home and he thinks it collectively plays better with the home crowd.

Judkins said the home crowd makes a huge difference with keeping the team’s energy consistent throughout the game.

Judkins said: “Guys good win, enjoy this, but we got to take advantage of this. Everybody has to travel here now. So, let’s be smart, let’s get our rest, let’s use this advantage that we have and let’s go out there and play as hard as we can.”

Wilson said the team will prepare for its next game like it’s any other game, do what they need to do to get ready and don’t put pressure on themselves like they did against RU.

The Hardrockers will take on the Orediggers on Friday at 5 p.m. and DSU will tangle with the Mavericks for the third time around at 7 p.m. in the M. Anthony Burns Arena.