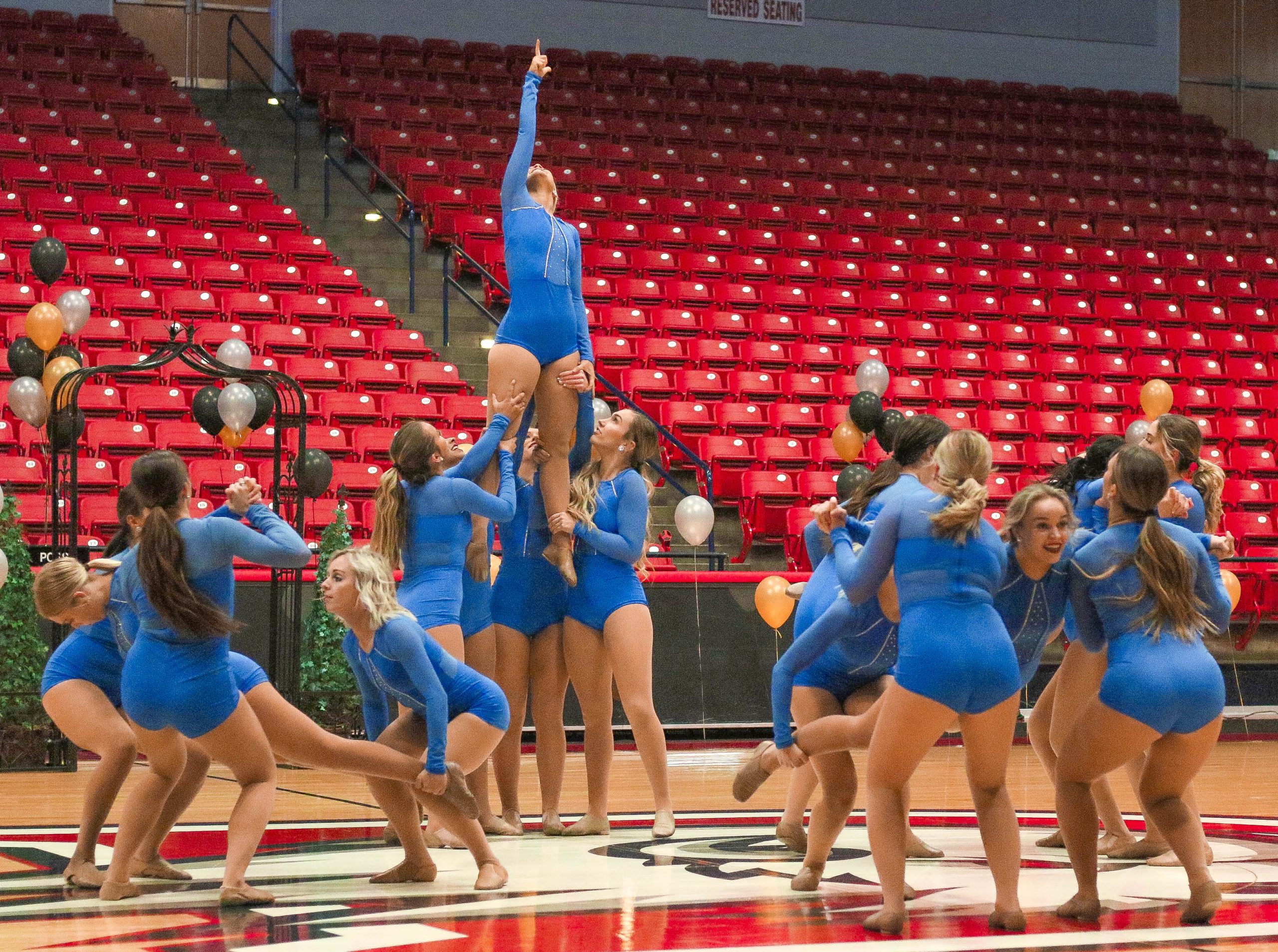 The Dixie Blaze performed multiple routines in the Burns arena at their review on Feb. 28. They have risen to the occasion throughout the whole year and provided great performances for the university’s events. Photo by Ben Swallow.

The Dixie Blaze dance team danced its way out of the season on Feb. 22 in its Blaze Review showcase where they had the chance to perform one last time.

Coach Kori Esplin said the Dixie State University dance team has been working toward bringing exciting performances to the students at DSU. The team performed at football and basketball games and also got to perform in this year’s Dixie’s Got Talent.

The showcase in total had 18 dance routines, 10 of those performed by the Dixie Blaze. Other dance companies from around the area came to perform as well, including the DSU cheer team.

Kodi Jo Drew, a junior biology major from Aurora, said her time on the team has been a great experience for her and brought her new opportunities.

“I love how involved we are on campus,”  Drew said. “We got to perform on Dixie’s Got Talent and we are heavily involved with the student government and the cheer team. It’s really fun to just be a part of a community.”

Although the season is over for the Dixie Blaze dance team, they have built memories together that will last a lifetime, Drew said.

Reilly Harris, a freshman nursing major from St. George, said being on the team has been a blast for her and the girls have been very supportive of each other. She is looking forward to continuing on the Dixie Blaze dance team and being involved on campus.

Deja Nicholes, a freshman general education major from St. George, said her experience on the Dixie Blaze has been incredible and she is hoping to continue dancing for as long as she can.

“I never want to stop dancing,” Deja Nicholes, a freshman general education major said. “It’s definitely a for life thing and I want to continue doing some college dancing and maybe in the future tryout for the big things.”

The team recently had the opportunity to visit New York and explore the city.

Nicholes said the trip was a fun experience for the team and they got to experience some great shows and dance classes.

They took a class from Neil Shwarts at Broadway Dance Center, Nicholes said.

Harris said it was her first time in New York. For her, it was the small things that were the most memorable, such as getting lost on the subway and getting yelled at by a random lady.

“We grew as a team for sure when we were there,” Harris said.

Auditions for next year’s Dixie Blaze team will be held on April 17-18.