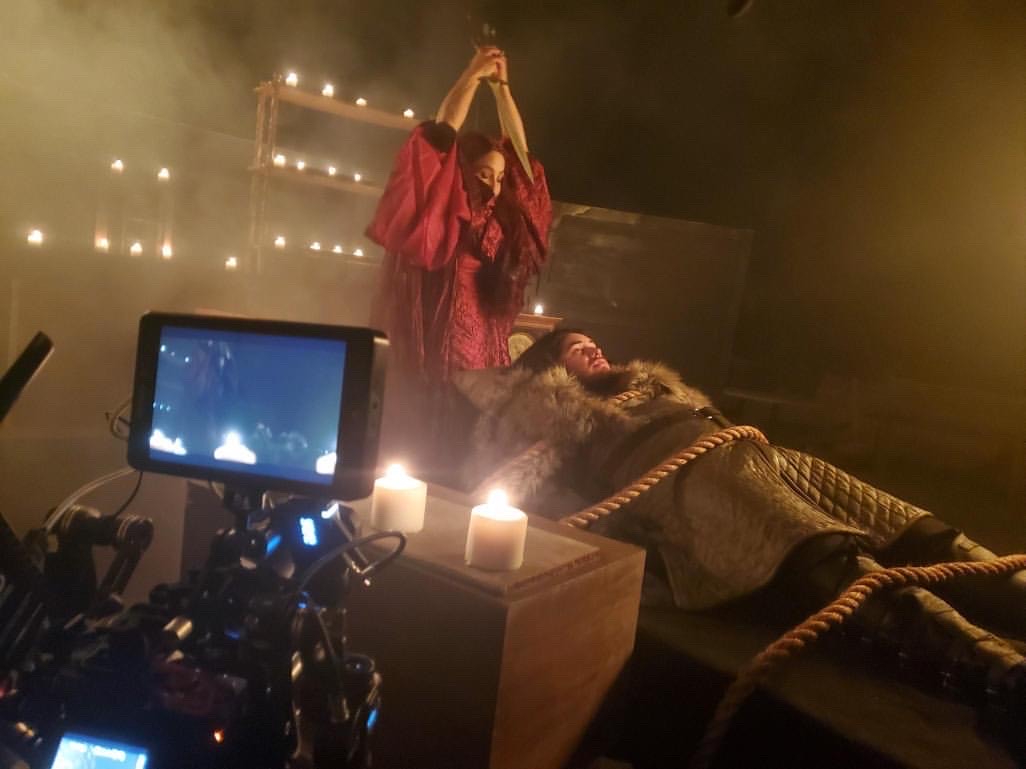 The Dixie State University film and theater department create a parody based on the "Game of Thrones" series. The parody was released on Jan. 24. Photo courtesy of the film department.

Dixie State University students are transported to the age of heroes, knights in shining armor and fierce dragons through the new short film “DSU Game of Thrones Parody.”

The parody begins with a wide shot establishing the dreary setting outside of a window of Campus View Suites. Inside sits a disgruntled Patrick Weeks, a junior theatre major from Las Vegas, watching an episode of “Game of Thrones.”

Weeks is surrounded by bags of local fast food joints and a variety of pizza boxes. His narrative begins, allowing the audience to learn that he is a lazy, failing DSU student.

With pizza sauce smothered on his face, Weeks drifts into a deep sleep suddenly waking up in the world of Jon Snow, a main character from “Game of Thrones.”

He navigates through the issues of being a lousy student by seeking guidance from other “Game of Thrones” characters on DSU’s campus, eventually leading him to success.

“Learning, engagement, opportunity,” said Weeks and multiple other characters repeatedly throughout the parody.

It was important that the script was structured around DSU’s core themes, so the audience could learn how important each value is to the current students, future students, faculty and community, said Brian Grob, the short film’s screenwriter and associate academic adviser for College of the Arts.

“I spent evenings watching ‘Game of Thrones,’ and as I was watching it I was writing the script,” Grob said. “I had never watched the show before.”

Grob said the script went through a process of three revisions as it bounced back and forth from himself and Braten. Braten was able to include humor and dialogue from “Game of Thrones” as Grob combined those features with DSU’s core themes and structured the script.

“The project took about four to five shoots over a series of a few months,” said Tisa Zito, the short film’s producer and actress that played the red witch in the film. “There was a lot of prep work, but once we got going I had fun with it.”

DSU students from the film and theatre departments were able to completely take part in creating and developing the project as well.

The parody was filmed by students in the film program using professional equipment such as the Fuji X-T3 and the Fujinon MKX lenses, Braten said. Students from the theatre department helped in creating medieval costumes and providing actors.

“When [Braten] was writing the script for the parody, he remembered working with me and thought I would be perfect for the lead role,” Weeks said. “He sought me out, and the rest is history.”

Grob said not only was the parody a way to share DSU’s learning objectives and core themes, it allowed for the creative arts of theatre and film to be recognized for their hard work.

“I hope that the students here take away DSU’s Core Themes from this,” said Zito. “I hope they also see what an amazing program we have in our Digital Film Department, how much talent there is at this school and how much fun you can have while learning,” said Zito.