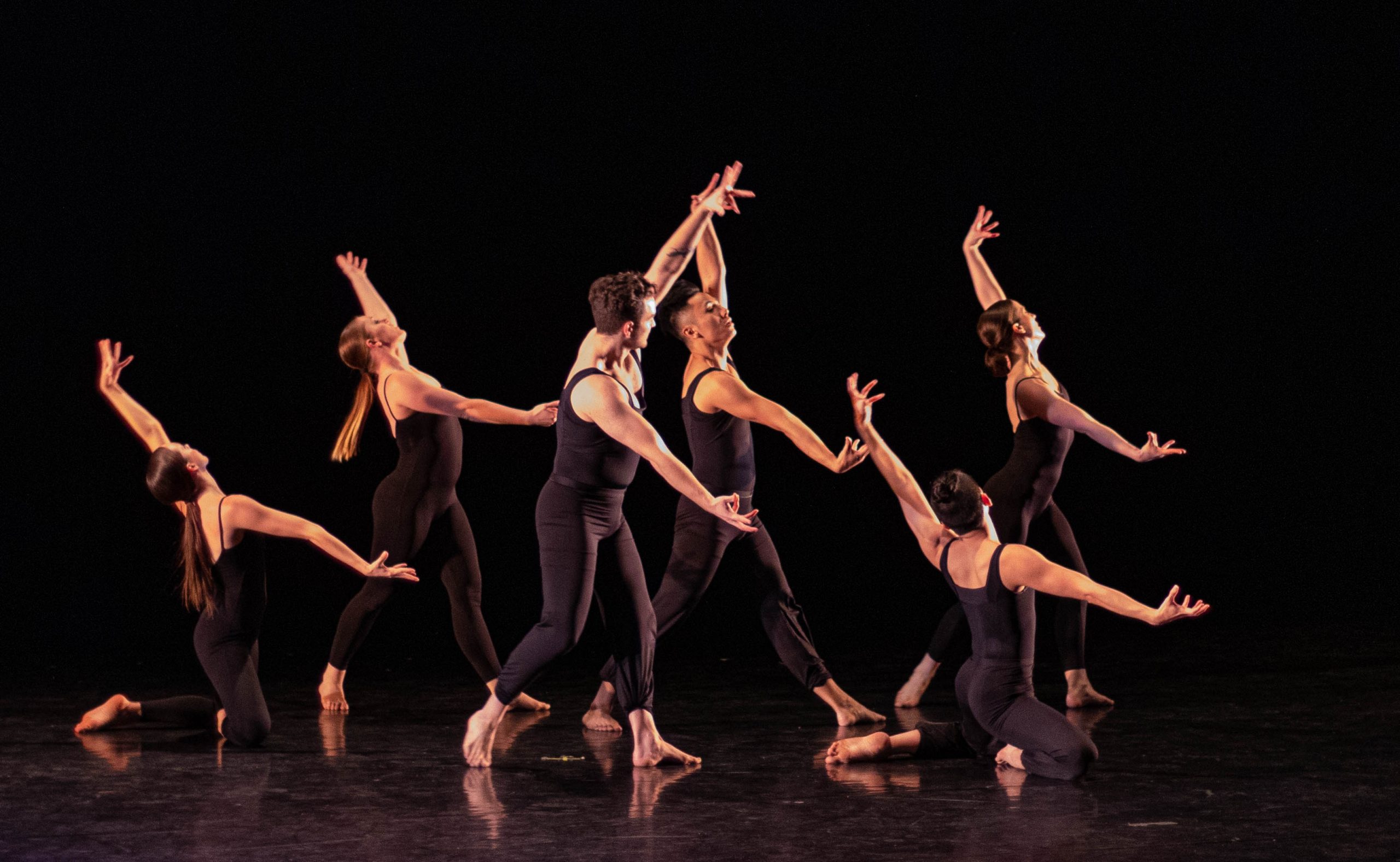 Repertory Dance Theatre joined the stage with 3HATTRIO on Jan. 23. They beautifully danced with the music creating a story through their dances. Photo by Breanna Biorato.

Warm, yellow light poured down onto the pitch black stage, highlighting the members of 3HATTRIO as they began the night singing “Mr. Jones.” Soon after, eight members of the Repertory Dance Theatre entered the stage accompanying the music with soft, fluid dance movements. The audience, engaged and excited, clapped to the beat of the drum.

3HATTRIO is a music group from Virgin, Utah. Their genre is described as “American desert music.” Hal Cannon, lead singer of 3HATTRIO, said their inspiration comes from the landscape they call home here in southern Utah. The group has performed in several other countries and with Repertory Dance Theatre numerous times.

The program, “Crippled Up Blues and other tales of Deseret,” was originally created in 2015 to represent the culture, traditions and people who have worked and lived in the deserts of the American southwest.

The dances were inspired by the “desert music” created by 3HATTRIO, said Cendese. Each dance move was a story-telling technique used to represent the historical people that lived in this red rock region.

As the music group sung a variety of songs with the help of an acoustic bass, guitar, banjo, violin and foot drum, the dancers, dressed in vintage costumes, frolicked rhythmically around the stage. The atmosphere created by the talent transported the audience back to the days of the pioneers.

“Both groups are wonderful organizations and we are so pleased to have them in collaboration with us this evening,” said Ginger Nelson, Celebrity Concert Series director. “It takes a lot to do stuff like this, especially being able to put all these different parts together. It’s difficult, but these guys are all professionals.”

“For 54 years, RDT has not only performed and danced on stages like this, but we have worked to build and strengthen the arts in communities wherever we go,” Cendese said.

“We’ve also loved connecting and working with your faculty, staff and students here at DSU,” Cendese said. “I had the supreme honor and pleasure of working with Sara Gallo and 11 amazing DSU dancers on a brand new work.”

The dancers from DSU were selected by dance associate professor and director, Sara Gallo, to gain the opportunity of learning from and performing with Repertory Dance Theatre.

“I learned more about the choreographic process, met different people and got to really know the RDT dancers and staff backstage,” said Rebecca Goates, a junior integrated studies major from Encinitas, California. “The dancers and Nick [Cendese] really helped us out. After everything is said and done, we can reach out to any of the RDT people if we ever need support in the dancing world, which is hard to find in this competitive field.”

Having three separate groups come together trying to make art is no easy feat, but as long as they all have the same end-goal in mind, it’s accomplishable, said Goates.

The next Celebrity Concert series will feature the Minguet Quartet with pianist, Andreas Klein in Eccles Concert Hall, on Jan. 31 at 7:30 p.m.