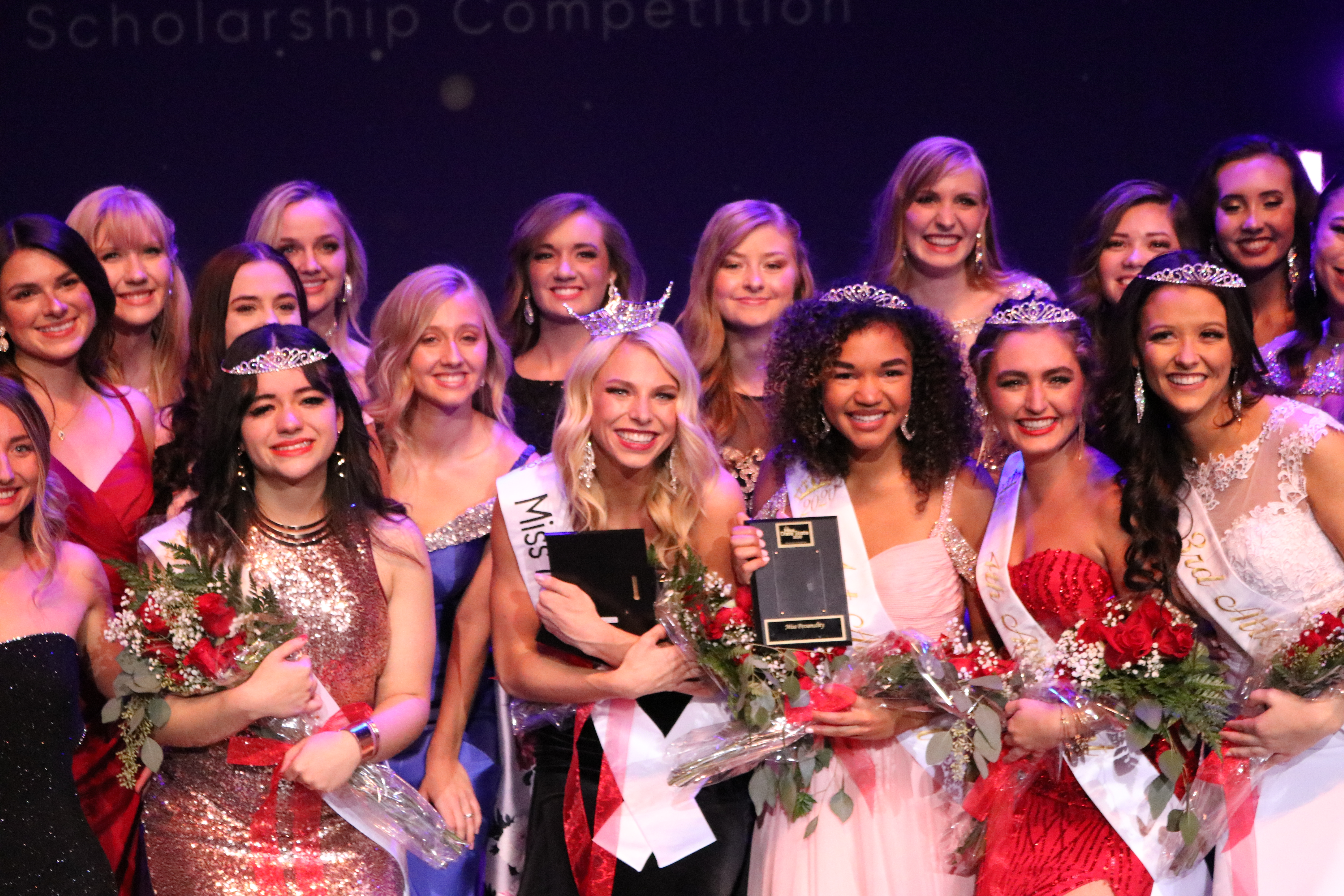 Contestants gather together after completion of Miss Dixie 2020. Morgan Olsen was crowned winner and will compete in Miss Utah in June 2020. Photo by Madison Anderson.

26 DSU students competed for the title that comes with a cash prize, full-tuition scholarship and the opportunity to compete for Miss Utah in June.

In March of 2018, Olson competed in her first pageant and won; being crowned Miss Spanish Fork during her senior year at Spanish Fork High School. She has now won her second title after taking a year-long break to dedicate time to her social impact platform of advocating for hospital heroes.

“My twin brother was run over by a truck when we were nearly two years old and was life-flighted up to primary children’s, so that’s where it came from and I’m just so passionate about it,” Olson said.

During time off from pageants, Olson hand-sewed courage capes to donate to various hospitals and children’s centers. She said her plans for DSU is to get people involved in her social impact initiative by using WednesD events, getting them sewing, tying blankets and doing anything they can to donate.

Del Beatty, dean of students and Miss Dixie director and producer, said: “With the change of Miss America really promoting strong, confident women who are educated and empowered and wanting to do great things, it’s attracting a different kind of contestant and I think it’s exciting. I think these candidates were great representatives of the type of girls we have at Dixie State.”

Beatty’s wife, Kimberly Beatty, was DSU’s homecoming queen in 1989. Their daughter Krissia Beatty won the title in 2012 and went on to win Miss Utah in 2015.

Many contestants had an entourage of fans in the crowd showing their love and support. One group that was loud and proud and sat in the center of the second row was Jenna Beatty’s group of friends.

“We all wore her favorite color purple in our hair, made her a poster, and wrote her a letter that she’s getting before the competition just to give her some extra confidence before,” said Sydney Benson, a freshman elementary education major from Folsom, California. “I’m really excited to see all the effort that everybody has put in. We’ve all been there through Jenna’s whole process, so it’s really exciting to watch it come together.”

Beatty sang a song for the talent portion of the competition and her initiative was down syndrome awareness.

Olson is no stranger to the Miss Utah competition as she competed alongside Miss Dixie 2019, Elleiana Habibian, in June 2019 as Miss Spanish Fork. Habibian finished Miss Utah as the people’s choice winner and in the top 12.

“I love this university, I love the board of directors, I love everything about this organization, so I’m excited for somebody else to have this position and bring new things to the table that I couldn’t,” Habibian said.

Olson said the main thing she plans to work on in preparation for Miss Utah 2020 is perfecting her talent which is tumbling.

“[Olson] is so passionate about service and her platform and raising money for children’s miracle network, all of the things the organization is focused on, so she will be a great homecoming queen,” Beatty said.

The Miss Utah 2020 competition will take place in Salt Lake City in June.