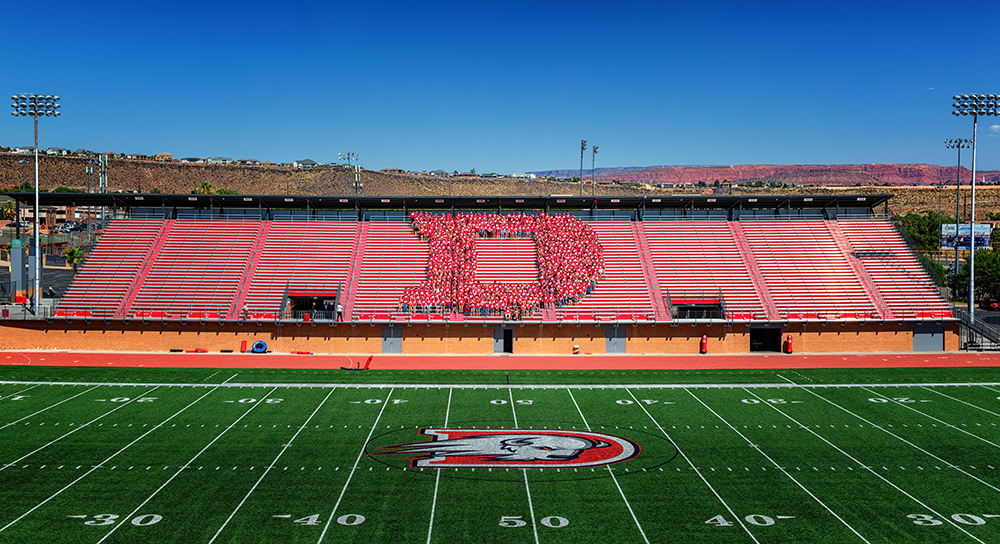 If you’re wondering why the sidewalks of campus are more crowded and it’s extra hard to find a parking spot, it’s because even more students have made their way to campus this year.

Enrollment numbers for Dixie State University have been released by the Utah System of Higher Education; the report portrays yet another record-breaking year for the number of incoming students.

According to a statement by DSU, the university has its largest student body to date with a total of 11,194 students; this is a 12.49% increase from last year.

In addition, according to the USHE, DSU has the highest enrollment percentage of all public colleges and universities in the state of Utah.

President Richard “Biff” Williams said DSU has its largest student body this year and, because of this growth, the programs DSU offers are only going to get better as the years go on.

“The growth at DSU will only increase,” Williams said.

Peter Gitau, vice president of student affairs, said the current strategic plan is to have 12,500 students at DSU by 2020.

“Projected population growth shows that there are more Utahns who need access to higher education,” Gitau said. “While there is increased competition, DSU is in a good place to maintain enrollment momentum.”

“I think it’s cool that the university is expanding, but I hope it doesn’t change too much for me,” said Audrey Ashcraft, a sophomore elementary education major from Boise, Idaho. “I really don’t want tuition to go up in price.”

Ashcraft said while she is worried about tuition price, she has enjoyed seeing a more diverse campus this year compared to previous years.

In addition, Ashcraft said she hopes there won’t be that big of a change in the number of students for the next couple of years because she likes the small class sizes DSU offers.

Jordan Parkinson, a senior media studies major from St. George, said she has noticed an increase in students in the library because it is hard for her to find a quiet spot to study. She also said it is impossible to find a parking spot and it is really frustrating.

“I think if the university offers more class times and more teachers and keeps the classrooms the sizes they are and don’t add more lecture hall type classes, I think it could keep that small campus and university type feeling while expanding to a bigger and better school,” Parkinson said.