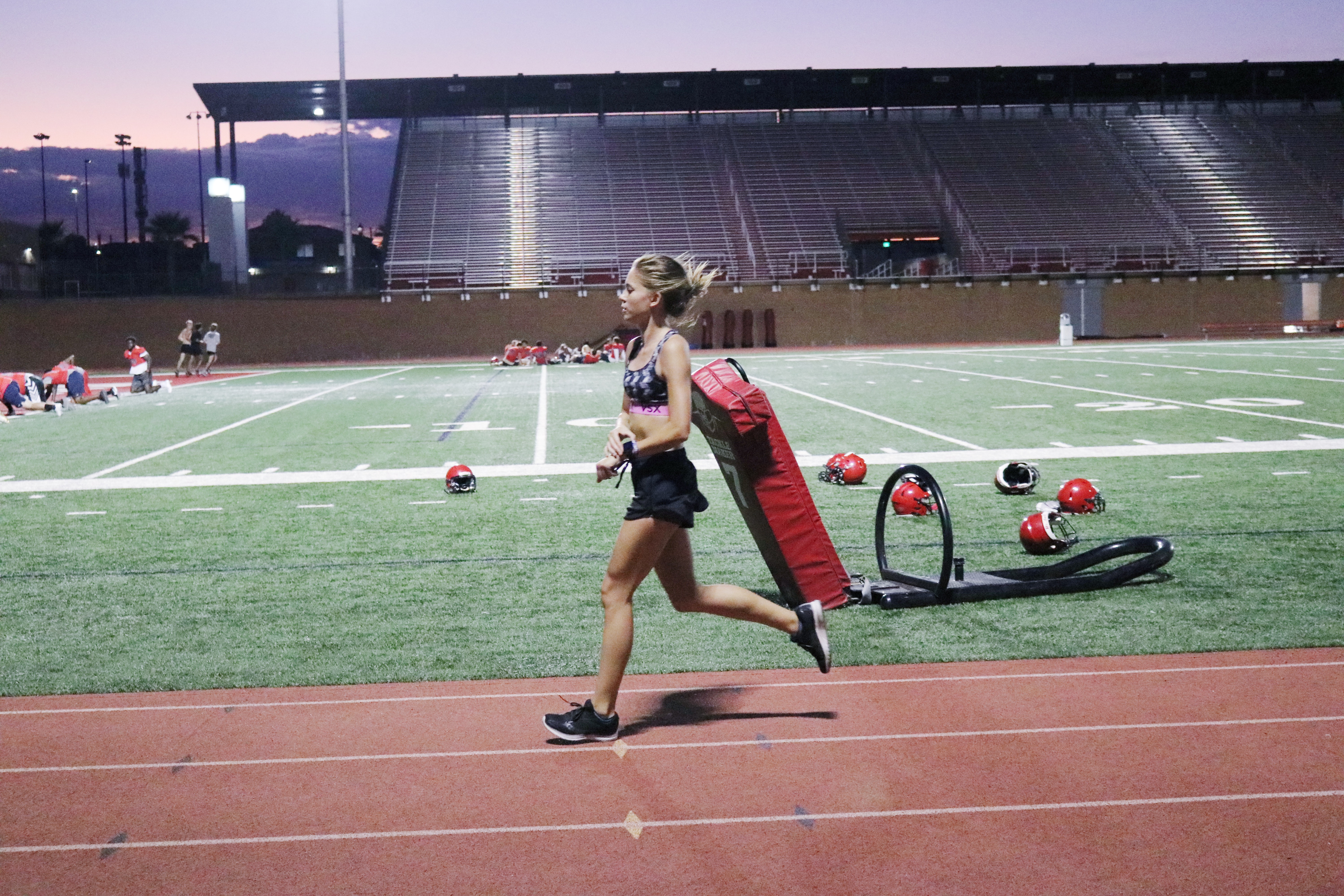 Billie Hatch, a junior exercise science from Logan, runs around the track for a cool down after practice. The Dixie State University men and women’s cross-country team will line up at the Brigham Young University Autumn Classic to start its season. Photo by Madison Boyd

The Dixie State University men’s and women’s cross-country team will line up for its first race of the season on Sept. 14.

The Trailblazers will be competing in the Brigham Young University Autumn Classic. The race will feature numerous Division I teams and in-state rival Westminster College will be one of two Division II teams competing. Head coach Justin Decker said that the team is not training specifically for this race, but making this race more of an icebreaker.

“[The BYU Autumn Classic] is just the icebreaker for the season, so most of our training is tailored towards our meets later in the season that will really matter like the conference championship and regional championship,” said Decker.

Men’s cross-country runner Tyson McKeon, a junior engineering major from Stansbury, said that doing the little things helps him physically prepare for the BYU Autumn Classic. McKeon said coming to practice every day, doing 100-meter strides, stretching, making sure he eats healthy and lifting weights to boost his explosions on sprinting and endurance all contribute to help McKeon be physically ready for his race.

Decker said that racing and gaining experience will help both cross-country teams and newcomers that never ran a college race before prepare for future races and the Rocky Mountain Athletic Conference championship.

Women’s cross-country runner Sara Fish, a junior nursing major from Cedar City, said that mentally preparing for the race for her means is focusing on the extra mile every day at practice and working hard to push for the extra mileage and finishing the race strong.

With McKeon already having experience in the BYU Autumn Classic, he has a strategy going into this race.

“I’m imagining it myself and imagining what I want to do at certain parts of the race. Because I’ve already done this race before I can go in there prepared for it,” McKeon said. “Working as a team, being one group, sticking with other people and having them stick with me or vice versa.”

Fish’s approach going into this race is going strong throughout the whole race.

Fish said: “I have to start off strong in order to finish strong. I can’t build up to it; I have to start up strong and hold it through the whole three miles.”

The BYU Autumn Classic will take place at the East Bay Golf Course at Provo on Saturday, Sept. 14.