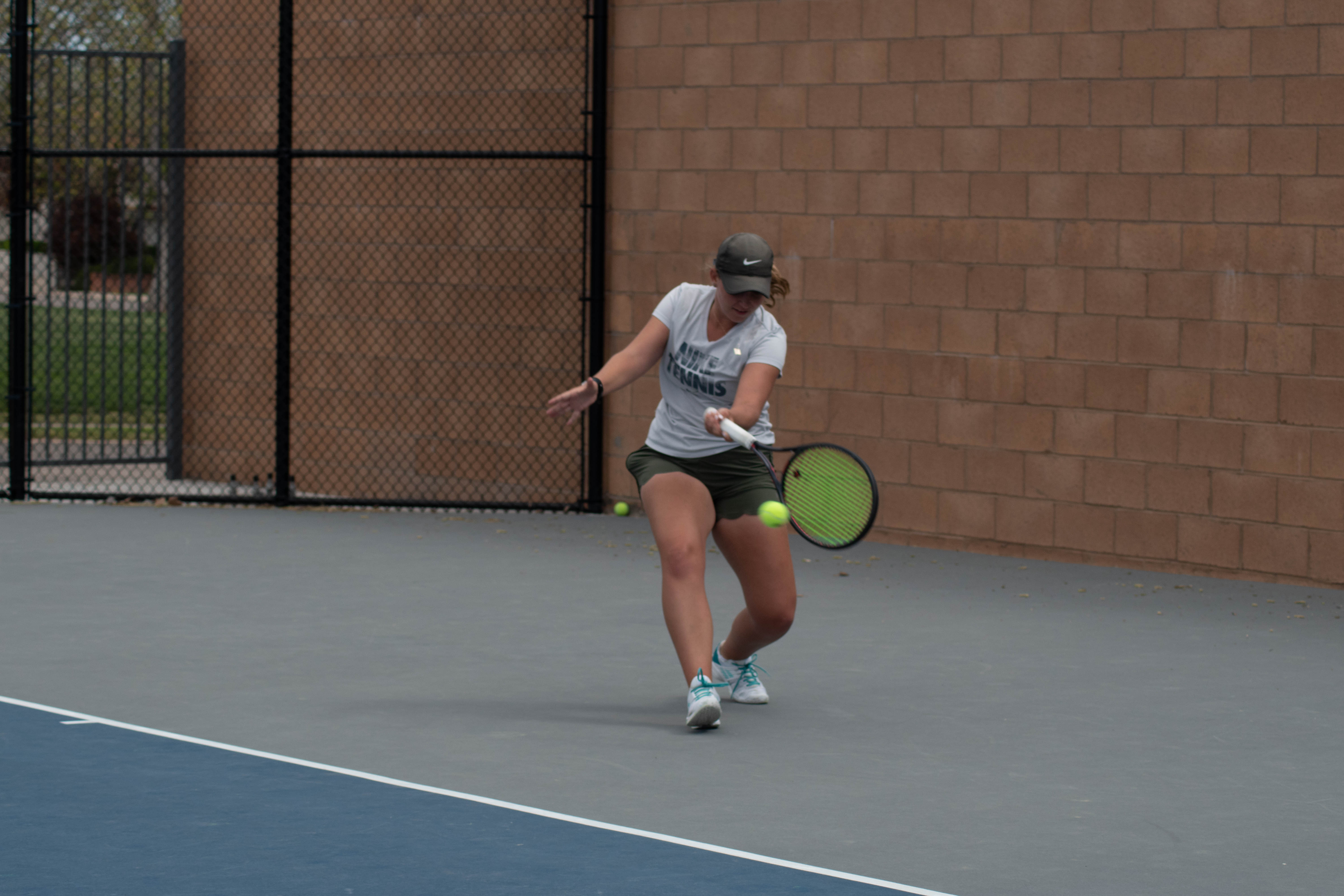 Megan Lynch brings not only a high level of play to the Dixie State University women’s tennis team, but also positivity and supportiveness on and off the court according to head coach Eric Pelton and her teammates.

Lynch, a sophomore business major from Albuquerque, New Mexico, is currently in her first year at DSU. Lynch attended New Mexico Military Institute, a junior college in Roswell, New Mexico for one year. Lynch started with the high school program and integrated herself into the junior college. She played for NMMI her freshman year where she was then selected to be on the superintendents list.

Lynch needed somewhere to play for her sophomore year and with the help of her private coach in New Mexico, Lynch came in contact with DSU’s head coach Eric Pelton. Pelton said Lynch has been a great asset to the team for not only her skills on the court, but her actions as a person off the court.

“She’s always the first one there helping and supporting and doing the little things that you don’t even ask,” Pelton said. “She goes out of her way to help other people and help support the team.”

Lynch started the season 6-0 in singles matches. Lynch is currently 10-2 and on a three match win streak heading into the final three matches of the season.

“She doesn’t get down on herself,” Harames said. “She stays in a positive mood and that’s really important especially as a doubles team and even as a teammate in general. It helps everyone stay positive and it helps everyone play their game better.”

Harames and Lynch are 9-4 in doubles play as partners this season. Harames said with Lynch being left handed, it makes it a little bit easier.

“We both get to take the backhand side,” Harames said. “And she likes to come to the net a lot which is really good for doubles.”

Since moving to St. George, Lynch said she has become more of an outdoors person but she still enjoys to spend time reading.

“I really do enjoy school,” Lynch said. “But I like being in St. George and how there’s so much outdoor stuff to do and not just sit around. I’ve gone hiking at Zion, which I always get corrected on for the pronunciation.”

Lynch is currently majoring in business with hopes to become a financial advisor for her dad’s business in the future. Therefore, she is thinking about changing her major to finance instead of business.

Lynch said the environment at DSU is a lot different than what she was used to at the military school.

“The people here are just so nice,” Lynch said. “My favorite part is just how nice and clean this environment is and how much of a community it is.”

Coming from a junior college, Lynch said a major difference is that all of the girls are really happy to be out there and they feel privileged to be able to play college tennis as opposed to walking on and playing.

“It’s really nice because these girls love tennis and they want to be here.”

The Trailblazers next home matchup is on April 12 against Idaho State University at 3 p.m.