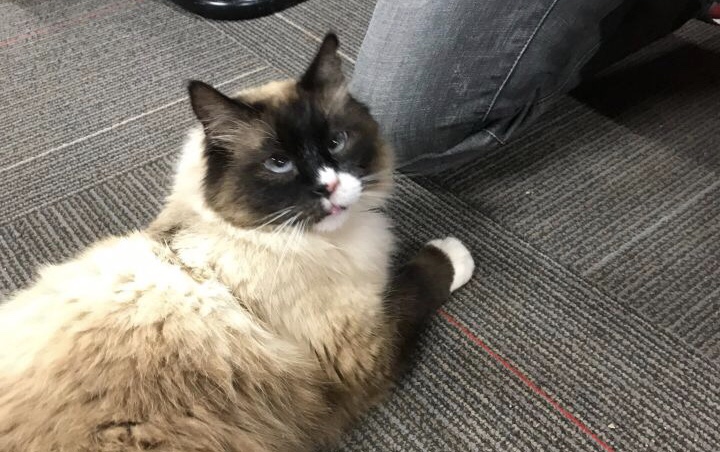 Jeff the cat is more than just a stray to the Dixie State University baseball team. He is also their friend, indoor mascot, and a furry reminder of the national championship won by the team in 2004.

Jeff lovingly goes by several other names, such as Jeffe and Jeffy.

Not only has the cat been around for about 19 years according to some of the players, but he continues to hold a place in the team’s heart, despite his age. He may not be a kitten but he is just as playful and cute as a kitten would be.

Lewis is allergic to cats and still plays with Jeff, even when the cat playfully scratches and sometimes breaks skin.

Jeff tends to stay in the team’s dungeon, which is where the team lounges inside the dugout when not playing or practicing. They leave food for him when he isn’t out wandering about campus. In fact, Lewis has seen other students capturing videos and images of Jeff and posting them on social media. Some students mistake him for a missing cat.

For the most part, Jeff stays around the baseball field and dungeon.

Rumors of Jeff having a second home have circulated the team for years. He disappears every holiday break, leaving the team worried he passed away just to show back up again when school starts up. According to the players, he has been doing this ever since he “joined” the team back in 2004. He may be a stray or a moocher during the school year, but the mystery remains unsolved for the team.

Brayden Bonner, a junior exercise major from Murray, said: “He kind of goes out and does his own thing on holidays. It’s weird. Whenever we leave for break, he’s gone for like a month or two, then he’ll just suddenly come back. The immortal cat.”

Bonner said Jeff sleeps most of the day when the team is hanging out in the dungeon and joins them at practice on occasion.

Jeff, like any other feline, has his “cat” side too.

Brody Clifford, a senior business management major from Queen Creek, Arizona, said: “It either can be a good day or a bad day. He’s already gotten me on my hand. But the cat is pretty funny. I love him.”

The team accepts the cat as one of their own each year despite allergies and animal preferences. He is well taken care of by a group of roughly 57 college students and coaches who hang out on the field almost daily. Jeff is considered the honorary dungeon cat, a stray who found a home, and has developed a friendship with the team.