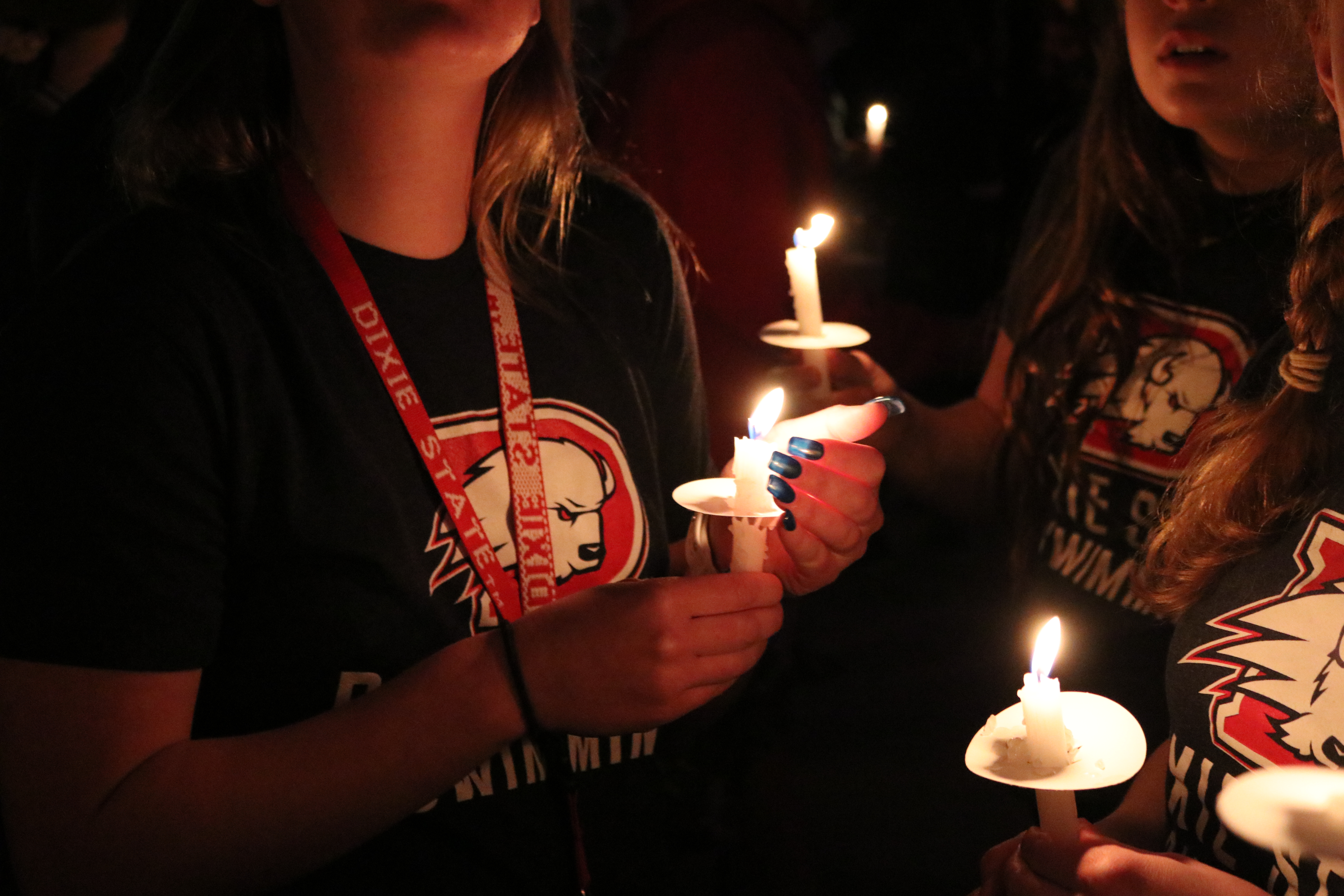 Dixie State University held a candlelight vigil for linebacker Abraham Reinhardt on Monday at the clocktower. The DSU Football team continues to celebrate the life of the student-athlete who died Friday using the hashtag “#AB3.”

Reinhardt, a junior radiography major from Wailuku, Hawaii, died after being admitted to the hospital on Tuesday following seizures and vomiting. The seizures caused “immediate brain swelling,” according to the GoFundMe page; Reinhardt was pronounced brain dead and taken off of life support Friday. The episodes were caused by hyponatremia, or low levels of sodium in the blood

Girlfriend Kailana Kayla and Reinhardt’s family spoke with Reinhardt’s teammates on Saturday where they thanked the DSU Football team for being a part of Reinhardt’s life. His family flew in from Hawaii for support, arriving in St. George on Wednesday.

Keric Seegmiller, assistant coordinator for media relations, hosted the vigil. Seegmiller announced that the “D” on the hill would shine “Trailblazer red,” Reinhardt’s favorite color, that evening in honor of him.

“We are here to remember an outstanding individual,” Seegmiller said.

Head coach Paul Peterson announced that the No. 3 jersey will be placed aside for the next season. Peterson also said that in future seasons “it will be a number that is earned.” Coaches will assess and choose one player who exemplifies all four qualities of a leader to wear the jersey, including “toughness, hard work, accountability and trust.”

“It’s never easy when you lose someone that’s is close to you,” Peterson said. “There is definitely a void on our team; it’s felt, and it’s not going to be filled for a long time.”

Peterson said, in the short amount of time he had with Reinhardt, he could see that Reinhardt exemplified the qualities of leadership.

“He was a quiet leader,” Peterson said. “He didn’t seek attention; he didn’t like the limelight.”

Despite his humble nature, Peterson said Reinhardt was a “phenomenal football player.” Peterson referenced a video on Twitter that showcases Reinhardt’s skills on the field.

Mo Eckroth, the senior associate athletic director, senior women’s administrator and compliance coordinator, spoke at the vigil on behalf of the DSU Athletic department. Eckroth announced Reinhardt’s picture will be featured on one of the banners hanging outside of Trailblazer Stadium for the next season; Reinhardt’s parents have been invited to attend the first home football game this fall, she said.

Eckroth said Reinhardt’s family wishes to remain private. However, Reinhardt wanted to make a difference, she said, and he and his family have “made the greatest play of the year” by helping others and giving them the chance to also make a difference.

Eckroth left friends and family with a final promise.

“It was once said, ‘Can you be a Trailblazer when no one has followed your trail?’” she said. “[Reinhardt], we promise to follow your trail.”

All in attendance lit their candles and the event ended with No. 3 balloons being released into the sky.

Reinhardt graduated from H.P. Baldwin High School in 2013, where he earned All-Poly All-Star, first team All-MIL, and Special Teams Player of the Year. He then attended Riverside City College in 2015 before transferring to DSU as a redshirt in 2017.

A GoFundMe has been set up to help Reinhardt’s family with medical expenses; currently, the fundraiser sits at just under $20,000.