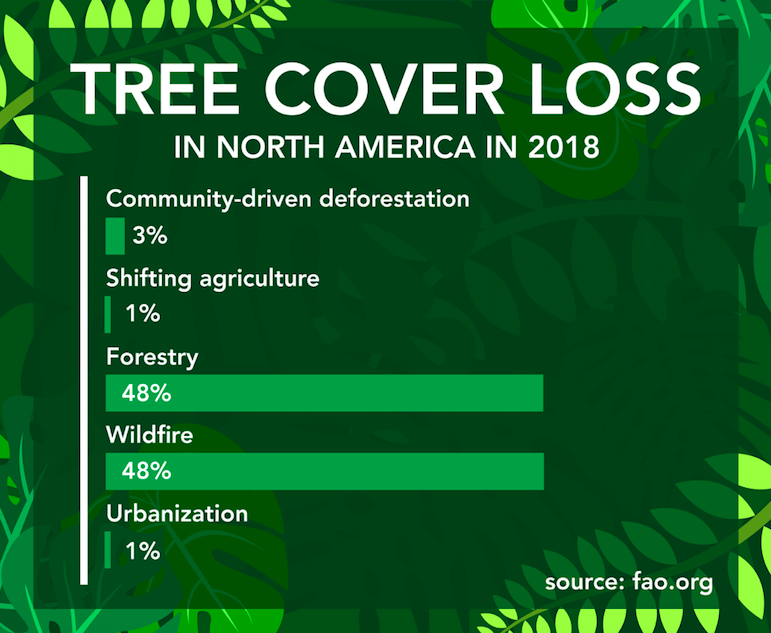 The blue macaw is now extinct, leaving future generations without the opportunity to experience them, and they aren’t the only ones in danger.

Bees, giraffes, pandas, bengal tigers, polar bears and other species are endangered due to climate change and human interference. One cause is deforestation, which is what took out the blue macaw in 2018. With trees covering 31 percent of the land on earth, they are vital to survival. The trees provide shelter, oxygen, food, materials and medicine, so without them, billions of people and animals will suffer.

Chopping down forests for profit only creates more harm than good in today’s world. With demands for resources becoming higher than the ability to produce those resources, living creatures are at an impasse.

As consumers, being conscious of our footprints on the world is important. Constant demand for goods such as palm oil and livestock are just some of the reasons deforestation has become an issue. There are more people and species coming onto earth and the capacity to support them is becoming less and less. More resources like land, water and grains are given to livestock than actual humans in a year, creating an imbalance in priority and preservation of the land.

The agriculture industry is one of the biggest contributors to deforestation since more and more land is needed to raise livestock and grow crops. This means that every year, we lose rainforest land equal to twice the size of London so that farmers have a place to raise cattle while also depleting our oxygen source.

2018 was officially the year the earth went over its limit of resources versus people. With that in mind, it may not be too long until our non-renewable resources are depleted entirely. Some of those resources include coal, oil, natural gas and nuclear power. Oil powers our vehicles and machinery and natural gases power our heat, electricity and cooking. Without just two of the non-renewable resources, our entire society would have to shift its way of life.

To help prevent and slow down deforestation there are environmental organizations such as Greenpeace USA, The Rainforest Alliance and the Natural Resources Defense Council (NRDC). Each of these organizations offer volunteer opportunities as well as accept donations toward saving endangered species, forests and resources.

With more and more resources, species, and forests disappearing it’s imperative that people start to consider their usage of items with palm oil and other ingredients that can only be harvested through deforestation. Using recycled paper can decrease the demand on tree cutting and reusing resources will help slow down the process.

The earth is in danger along with its inhabitants, so it’s time to take action and be more conscious with our resources and beautiful wildlife that we share it with.