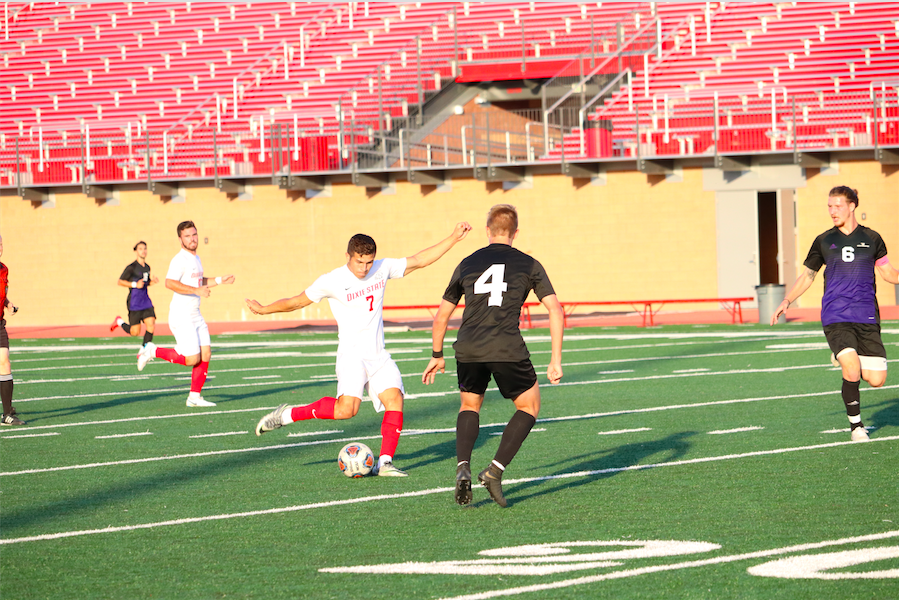 Dixie State University’s men’s soccer team has had a rocky record during its first season in the Rocky Mountain Athletic Conference.

“We just need to adjust to the teams in the conference,” Head Coach Jonny Broadhead said. “What we need to do to beat those teams is a little different than what we’ve needed to do in past seasons in the PAC West.”

Midfielder Dominic Damato, a senior communications major from Las Vegas, said he has full trust that the team will adapt to the new play styles teams in the RMAC have.

“I wish I could have another go at some of the teams,” Damato said. “But I know our guys will take care of business for future seasons.”

Aside from adjusting to the new conference, the team is looking to improve on closing out games.

Broadhead said the team could have won a lot more games and need to work on limiting the chances other teams have to beat them with. However, he said he is proud of the way the team has been able to work hard and excel together to end the season strong.

“I think the way we’ve had a three-game win streak now shows how we’ve pulled it together,” Broadhead said. “In the biggest games, I think we stepped up and we competed well. Some of those games against teams in the middle and bottom of the conference we wish we could get back, but some of the ones in the top we really put out a solid game.”

The Trailblazers finished out the season with a home game against in-state foe, Westminster College, on Oct. 25, which was also senior day. The team’s win streak came to an end, losing 2-0 to the Griffins.

Forward Frankie Mallek, a junior business administration major from Yuma, Arizona, said he had looked forward to playing on their home field for the final time with the seniors.

“Being able to play one last time with the guys and get all the memories in will be really good,” Mallek said.

The Trailblazers hit the road on Oct. 27  and played Colorado Christian University. The team capped off the season with a 1-0 win going 7-9-2 overall this season.