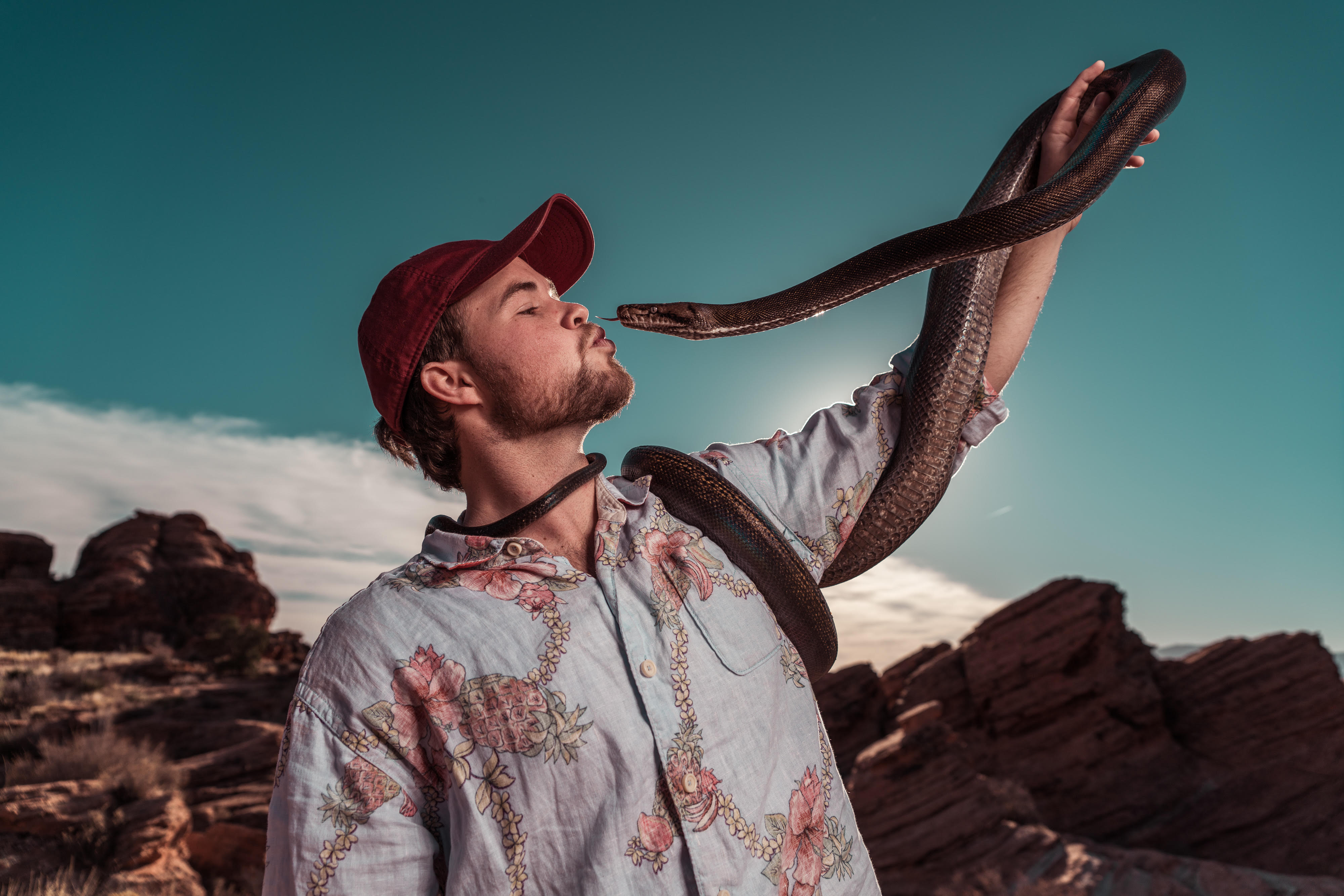 St. George might be known for fossils, but it also has a home-brewed Jurassic Park lurking under the surface.

Christian Dwyer, a junior biology major from Laguna, California, is the founder and CEO of Cold Blooded Science, a private breeding facility for rare and exotic reptiles.

Dwyer founded Cold Blooded Science in 2012, and said he got the name from the cold-blooded reptiles he works with and one of his main interests: science.

The company’s focus is the conservation of rare and exotic reptiles through captive breeding programs and educational shows, Dwyer said. In addition, he said the company sells some of the offspring from their breeding pairs.

The reptiles are housed in a large, specialized habitat, Dwyer said. He said carefully labeled terrariums and containers hold everything from Mexican beaded lizards and helmeted geckos to green anacondas and ball pythons.

Dwyer said he runs the company with help from his girlfriend, Jessie Arruda, a senior with a double major in biology and communications from Hawthorne, California.

The couple bonded over their love for animals and admiration for television personality Steve Irwin, but when Arruda was originally introduced to the facility, she was shocked by its scale.

“On our second date he brought me here,” Arruda said. “It took me by surprise when I came in and saw all of it.”

Among the numerous species bred and raised by Cold Blooded Science are panther chameleons native to Madagascar, which sport green and orange vertical stripes and a mesmerizing teal pattern across their sides, and red-eyed crocodile skinks, with dark, thorny scales and remarkable orange rings around their eyes.

Dwyer said he has even bred chahouas and crested geckos to create exciting, colorful hybrids called crestouas. One of the hybrids is orange and yellow, with a pattern of burned-looking black splotches along the back of its head and body, giving it the appearance of spilled hot sauce.

But Dwyer’s main focus are his remarkable New Caledonian giant geckos, he said.

“They are the largest geckos in the world,” Dwyer said, “and they can live for up to 45 years.”

The giant geckos come in a variety of colors, some rarer than others.

“They can range in color and pattern from vibrant pinks and greens to jet black or dark brown, and it all depends on the kind of environment they are found in,” Dwyer said.

Dwyer said he sells the giant geckos when they are 4-6 weeks old, when they are small and mostly pale. Their colors become more vibrant with age, but even when they’re young the dull outlines of what will become their vibrant coats are still visible, he said.

The typical starting price of a baby giant gecko is $500, but depending on their rarity and vibrancy can go for as much as $5,000, Dwyer said.

To make the geckos comfortable, a humidifier keeps the facility at a steady 77 percent humidity, he said, a far cry from St. George’s naturally bone dry 20 percent humidity.

Dwyer said while the giant geckos were originally difficult to take care of, the availability of their diet blend has made it much easier.

“It’s essentially like a protein shake but for geckos,” Dwyer said. “It kind of smells like fruit and cereal.”

Like most of the reptiles housed by Cold Blooded Science, the giant geckos also snack on Dubia and Madagascar hissing cockroaches that Dwyer raises for feed, he said.

Dwyer said while it is legal to breed and sell captive giant geckos, it has become impossible to import them from their home archipelago of New Caledonia off the coast of Australia.

“You can’t bring them into the country anymore,” Dwyer said, “because they closed the exports and made it illegal. So, whatever’s over here is left over from when they originally brought them over.”

Dwyer said his profession stemmed from his childhood hobby of catching and raising reptiles.

“When I was around eleven and a half I started keeping these things called crested geckos,” Dwyer said.

After owning the crested geckos for over a year, Dwyer said he decided to breed them.

Dwyer said he ended up listing the baby crested geckos on FaunaClassifieds, a website used by reptile breeders to sell their stock online.

He ended up being contacted by a lady from Montana who purchased all of the baby crested geckos he produced that year, he said.

Dwyer’s father was impressed, he said, and encouraged him to continue.

On his 13th birthday, after getting good grades, completing his chores and saving the money he earned breeding reptiles, Dwyer said he earned his dream gift: a pair of a New Caledonian giant geckos.

Dwyer said he is interested in genetics and technology, as well as the medical applications of reptile venom, but is working toward a bachelor’s degree in biology with a natural sciences emphasis and a minor in business administration.

“You can get a degree in biotech, but I feel like I would rather get a degree that’s more on the broad sense, so I can use it for more different things,” Dwyer said.

After Dwyer graduates from Dixie State University, he said he wants to pursue a master’s degree and study giant geckos on their native archipelago of New Caledonia.

Dwyer said he hopes to one day open the first zoo in southern Utah under the company name.

“I want to have it be really educational and research-based,” Dwyer said. “I want to have research labs affiliated with [DSU] or SUU that allow students to come in and do research.”

Arruda said she dreamed of walking through the zoo, seeing souvenirs and a stuffed animal of the new logo Dwyer is working on.

While the current logo is a subdued image of New Caledonia, the new logo sounds more whimsical and embraces the company name.

“The logo that I’m working on right now is going to be one of the giant geckos in a lab coat, with like Einstein hair, and he’s going to be holding a beaker,” Dwyer said.

“Everyone who’s had us out to do it has really enjoyed it,” Dwyer said.

If you are in the market for an exotic gecko, or want Cold Blooded Science to educate and showcase their reptiles at a birthday party or classroom, their contact information and current availability can be found on their Facebook and Instagram pages. You can also find them at Reptile Expos, showcasing and selling their amazing animals.