The Corndog Company sells deliciousness on a stick 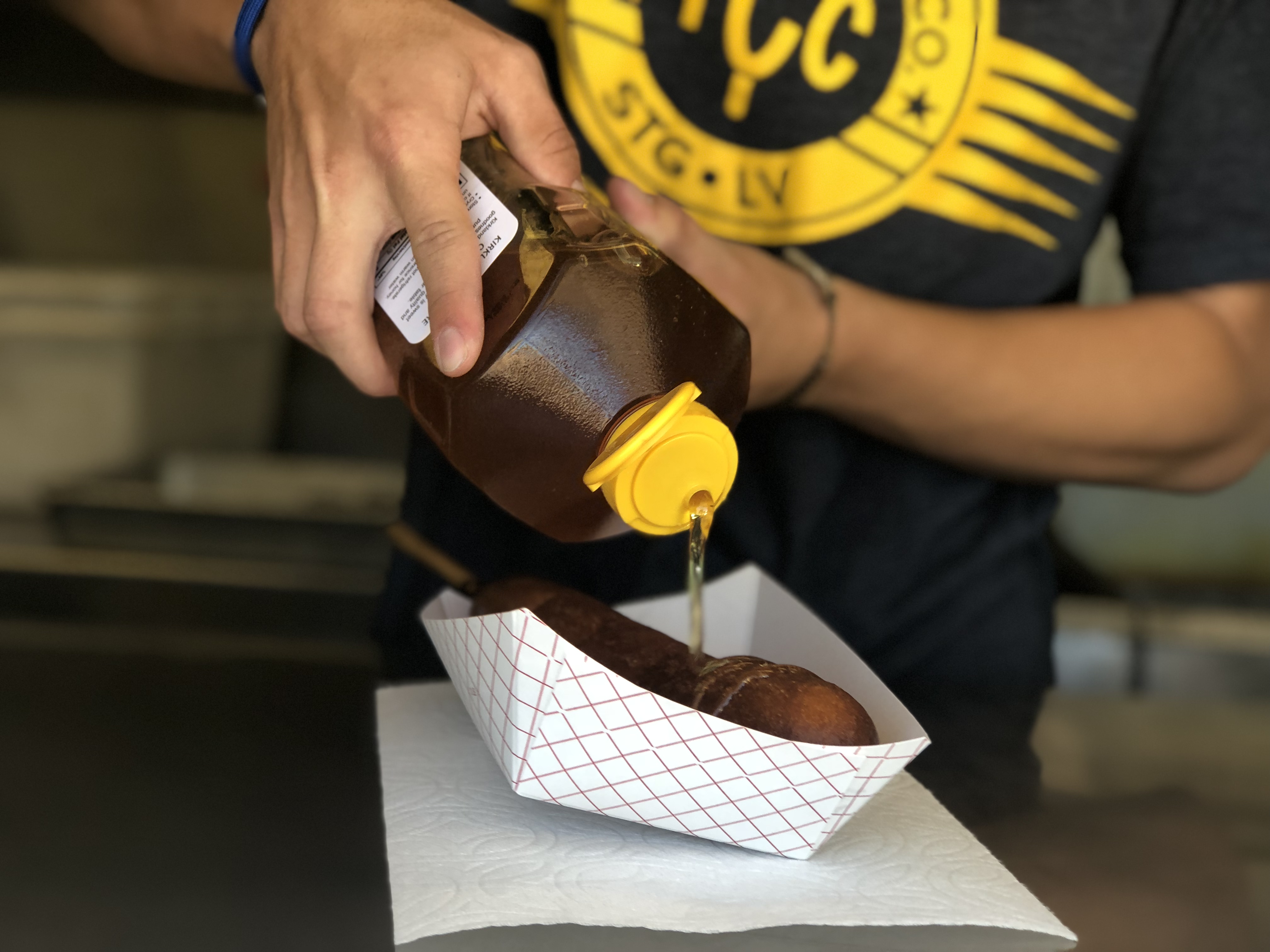 When one thinks of corn dogs, what comes to mind are frozen cornbread battered hot dogs on a stick which are then deep fried. The Corndog Company serves hand dipped, non-frozen foot-long corn dogs, and give you the option to put honey on them.

Think of cornbread with a foot-long hot dog in the center, topped with honey and mustard on a bamboo stick. The result is an appetizing treat for your taste buds.

Owner Curtis Hall said the food truck was first started by Jeff Patton, who began the company in 2013, and was the first food truck in St. George.

“[There] are two elements that make The Corndog Company great,” Hall said. “The number one thing above everything else, is we have to have great food.”

Having tasted their corn dogs, the food is great and other customers agree.

“They’re freshly made, right in front of you,” St. George resident Michael Goold said. “They have a wide variety of dogs you know. The cheddar dog’s my favorite. [You] can’t go wrong with this corn dog company.”

The Corndog Company may excel in making their unique, homemade corn dogs, but it isn’t the dogs that are the most popular item on the menu said Atticus Aoki, a freshman general education major from St. George.

“The deep-fried cheeses,” Aoki said. “They come in pepper jack, sometimes cheddar, sometimes mozzarella, and the people go crazy for it.”

When biting into a melted square of pepper jack cheese, identical in length to the classic foot-long corn dog, nestled inside the corn bread batter, the response was the same as biting into the most heavenly piece of cheesecake on Earth. The word ecstasy comes to mind, but you’ll have to try it for yourself.

Hall said the food truck gives him the opportunity to interact with the community during the week and at the ten events the company is at every month. Being an integrated part of the community is a large part of why they’ve succeeded.

“I love getting on this truck and talking to these people and hearing about their lives and serving them great food,” Hall said. “Every single day someone will tell me this is the best corn dog they ever ate.”

Corn dogs, cheese sticks and home-made kettle chips served with friendliness and a gift for gab are what you can expect at The Corndog Company food truck. If you haven’t had the opportunity to try their delicious food, you can spot them at their current location next to the Popeye’s on River Road.

Hall said on Oct. 4, students at Dixie State University will have a chance to treat themselves to the delicacy also known as the “the honey-dog” when the food truck will be at the Wellness Fair.

Their physical address is 1405 S. River Road until the construction on Bluff St. is completed, then they will alternate between the new address and 160 N Bluff St., Hall said.