Students come forward with frustrations, ask questions about why their professors are on administrative leave

Two professors at Dixie State University have been put on administrative leave this semester, causing students to come forward about their frustrations and raising speculation from the campus community.

Hicks said he can’t disclose any information about why Wignall or Webb are on administrative leave but said they are on leave for different reasons.

According to DSU Policy 372: Corrective and Disciplinary Action, an employee may receive disciplinary action if there is negligence, incompetence, insubordination, disorderly conduct, abusive treatment of others, etc.

Jim Haendiges, associate professor of English and faculty senate president, said although the policy infers that faculty are under discipline, faculty members on paid leave are simply under investigation.

Policy 633: Faculty Rights and Responsibilities outlines the “professional responsibilities and rights for all faculty…” According to the standards of conduct section in the policy, faculty must abide by these standards: work in conjunction with colleagues to fulfill the mission of DSU; abide by all university policies, board of regents policies, and state and federal laws and regulations; demonstrate professional standards of behavior; etc.

Neither Wignall nor Webb have responded to the Dixie Sun News’ request for comment.

Both Wignall and Webb’s absence in their courses has raised questions from their students.

Kaitlin Moore, a senior communication major from San Diego, chose to take Organizational Communication and System Dynamics from Wignall this semester and said she was shocked when Wignall didn’t show up for class one day. 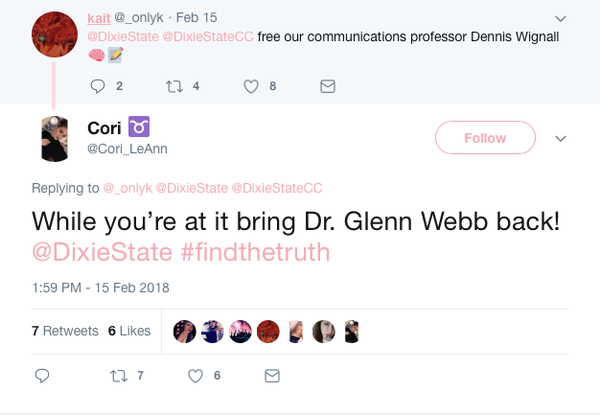 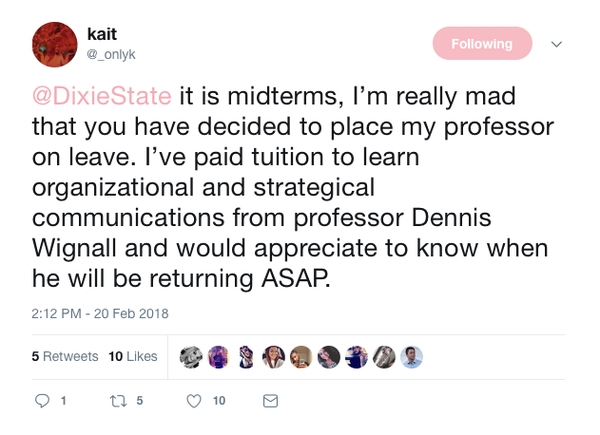 Moore said her class wasn’t given any information as to why Wignall was gone.

“There was no notifications through Canvas; nothing was sent out,” Moore said. “It just seemed off to me.”

Moore said the syllabus for her class has already been changed, and having someone else teach the class will not be the same as learning from Wignall.

“We’ve been given no information as to well who do we talk to?” Sullivan said. “…Any students who’ve attempted to reach out to whomever they can in order to figure this out have been met with indifference and ‘I don’t know,’ ‘it’s out of my hands,’ or ‘don’t worry about it.’ Well we’re going to worry about it because it’s our grades.”

Jeffery Jarvis, dean of college of the arts, said he is currently serving in Webb’s role as department chair until there is a resolution to the situation. He also said he is taking over Webb’s Senior Recital course.

Both Sullivan and Collet said they want honesty, full disclosure and accountability from DSU administration.

Because of these circumstances, students have banded together and created a website called Coalition of Concerned Students and Citizens.

On its homepage, it states: “Students are growing concerned that politics behind the scenes at Dixie State University have and will affect their education. Why have competent and trusted teachers been removed without warning or explanation?”

On the website, viewers have the opportunity to share concerns or stories. It also advises to not use a student or faculty email and has an option for anonymous comments.

DSU administration released a statement and said: “[DSU] is committed to providing a safe environment for all of its students, faculty and staff; enhancing academic programs to promote student success; supporting and investing in faculty and staff; and strengthing the cultural, economic and civic life of southern Utah.”

This is an on-going investigative story into why these faculty members are on administrative leave and will be updated as the Dixie Sun receives more information. To contact us regarding information, please email DixieSun@dixie.edu.