Flames from a breaker box in the Avalon Apartments caused an evacuation and power to be lost in one of the buildings Monday.

Eight fire engines from the St. George Fire Department responded to the structure fire call at 7:30 p.m. to building F of the Avalon Apartments. A breaker box had malfunctioned in a ground-level unit when the electric stove was turned on, Fire Chief Robert Stoker said. There were no injuries, and the situation was contained and power was restored to five out of the six units by 8:10 p.m. Stoker estimated the costs to cover damage to total $1,000.

Flames and smoke burst from the breaker box, which caused the entire building to lose power. The women in the apartment evacuated their room before calling 911, Stoker said.

Dani Bartholf, a freshman business major from Gilbert, Arizona, was watching “The Bachelor” with her roommates when the fire started in the laundry room of their apartment.

“We heard a loud pop, and then all the lights went out,” Bartholf said. “I saw flames, and then I sprinted out. There was a lot of smoke, and the walls were black.”

“Upon our arrival, we found a lot of burned wires and some breakers burned with some in the unit,” Stoker said. “The breaker in the breaker panel did not trip, and it activated the power back to the transformer … which, in turn, shut the power off for the entire building.”

Stoker said they treat incidents at student housing and apartment complexes very seriously because of the high number of people in the same building.

“Across the country, there have been quite a few devastating fires at college dormitories and a large number of lives lost at these instances, so we try to respond with extra manpower if there are fires at an apartment complex like this,” Stoker said.

Bartholf said she was surprised the fire alarm didn’t go off.    “There may not have been enough smoke to cause the (fire) alarm to activate,” Stoker said. “With electrical fires like this one, the smell can be really bad, but there often isn’t enough smoke to effect the alarms.” 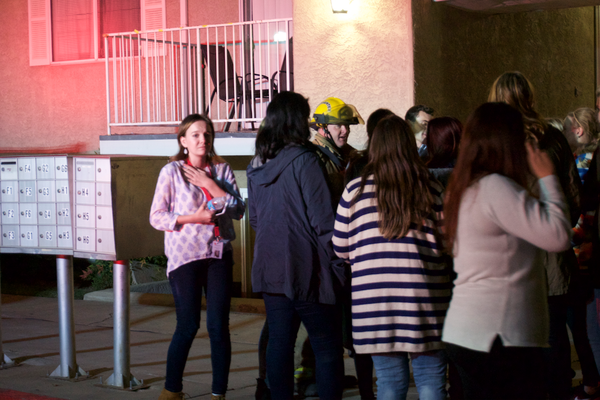 Students are briefed by a fireman outside their apartment while crews inspect the units. A fire had started inside a breaker box of a unit on the ground floor of the apartment building Monday, which caused the power in the entire building to shut off. Photo by Ryan Huskins. 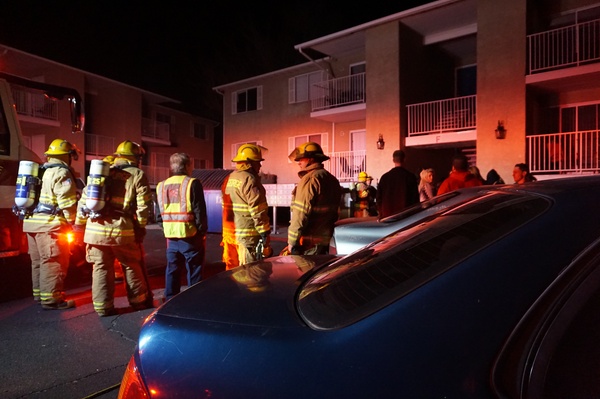 Fire crews arrive at the Avalon Apartments Monday. A fire had started in a gound-level apartment when a breaker switch malfunctioned. Photo by Ryan Huskins.