Running through campus dressed in a costume at midnight is something that may usually get the cops called on you.

But that’s exactly what over 100 students, faculty and community members did as part of the sixth annual Rebel Midnight 5k Friday night. The event was organized by the Dixie State University Student Alumni Association for Homecoming week to raise money for student scholarships.

Alexis Truman, a freshman general education major from St. George and vice president of student involvement for DSUSAA, said she planned the 5k race to uphold tradition and get the community involved with campus events.

“I just love the environment here,” Truman said. “Everyone is so excited and there is so much school spirit at [the Rebel Midnight 5k]. It’s a great tradition that I hope carries on in years to come.”

Several participants came dressed in costume with the theme of the race, “Run through the decades.” Costumes included wigs, tie dye clothing and tutus.

Truman said she was hoping for a minimum of 200 participants to run in the race. The turnout ended up being around 120 people. Although she was disappointed, Truman said she is still happy with how the event turned out.

“I didn’t have as much time to plan it as I would have wished,” Truman said. “We still earned a lot of money for scholarships, and I think the people who did come out enjoyed themselves.”

The race started and finished at Hansen Stadium and circled campus twice. Austin Manuele, a junior biology major from St. George, said despite the course being poorly lit and confusing at parts, it was fun and competitive.

“I just like to stay active and get involved,” Manuele said. “It was a little hard near the beginning and everyone nearly went the wrong way, but I’d do the [Rebel Midnight 5k] again.”

“I was involved in organizing [the Midnight 5k] last year, and I love to run, so it was a no-brainer to come out and complete,” McDonald said.

President Biff Williams attended the race with his family. He agreed to donate $1 to the scholarship fund for every runner who beat him. Over 100 people crossed the finish line before Williams finished at just under 40 minutes.

“Events like the [Rebel Midnight 5k] build Dixie spirit,” Williams said. “I love coming out to school events, seeing everyone and participating with the students and faculty members. This is our school and it’s traditions like this that keep us going.” 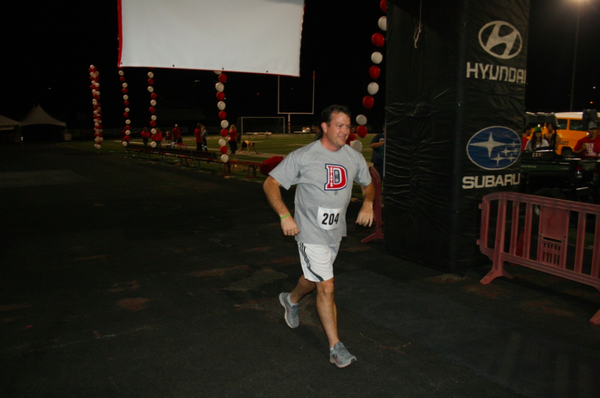