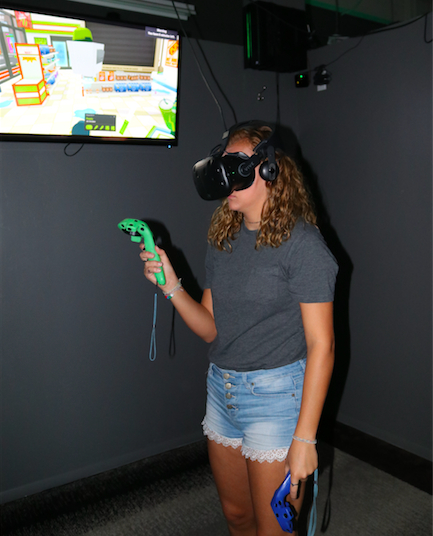 Sony and Nintendo brought video games to our homes, but not everyone can afford the equipment. At Gamer Planet, one can play the same games for a lot less.

A gaming computer on Amazon.com will cost a person up to $1,000 or more for high end performance. An Xbox or Playstation 4 costs between $300-$500 depending on the model and whether you’re buying used or brand new. Games themselves are $60-$100 because you have an option to just buy the game, or collector’s editions. One could easily spend an entire paycheck on games alone.

At Gamer Planet, you can pay $15 for 4 hours of playing time. They offer daily, weekly and monthly passes as well.

“Say there’s a new game coming out and it costs $60 to get and you don’t get paid for a few weeks — we have accounts that already have the game that’s coming out,” employee Destanie Adams said. “It’s updated. It’s ready to play and you can play it here to decide if you want to buy it, or it’s not really your thing.”

For someone who likes to know if they enjoy a game before purchasing it, having the ability to “try before you buy” can be an appealing reason to stop by Gamer Planet. Though their main customer base are kids from elementary to high school who don’t have access to a console or computer, Adams said.

If you walk in to Gamer Planet some time between 4 p.m. and 7 p.m., there is a definite atmosphere of community and socializing as kids from 10-15 play “Fortnite” with their friends and family. It is reminiscent of the early days of gaming when you would take your console or computer to a friend’s home for a LAN party. LAN is an acronym for Local Area Network.

In the mid to late 90’s and early 2000’s, the internet was only accessible through a “dial-up” modem, which was connected to your home telephone, or “landline” in today’s terminology. The connection to the web at the time was not fast enough to support playing certain games like “Halo” or “Doom” online with friends. The solution to this were LAN parties, where a group of gamers would meet at someone’s home or another location — a comic book store or computer lab — with their computers and creating a local network by linking each computer to an internal server. If you work in an office or call center, then you’re most likely linked with all the other computers in the building in the same fashion.

Gamer Planet also has Virtual Reality booths you can buy time for. I paid $15 for a half hour of VR and played “Beat Saber” a popular game among their younger customers, which is a cross between “Guitar Hero”, “Fruit Ninja” and “Dance Dance Revolution” — with light sabers.

When playing VR, you basically step into the world of the game. The entire environment surrounds you and gives you a sense of full immersion.

With all that Gamer Planet has to offer, VR is their most unique feature.

“To have a VR system at home is very expensive,” employee Michael Rauicchio said. “It’s not a normal occurrence for VR to be publicly accessible.”

For those who enjoy playing video games but can’t afford it or looking to experience the future of game technology, Gamer Planet provides accessibility, a friendly atmosphere and an opportunity to put community back into gaming.