‘Everybody’ does a modern take of ‘Everyman’ 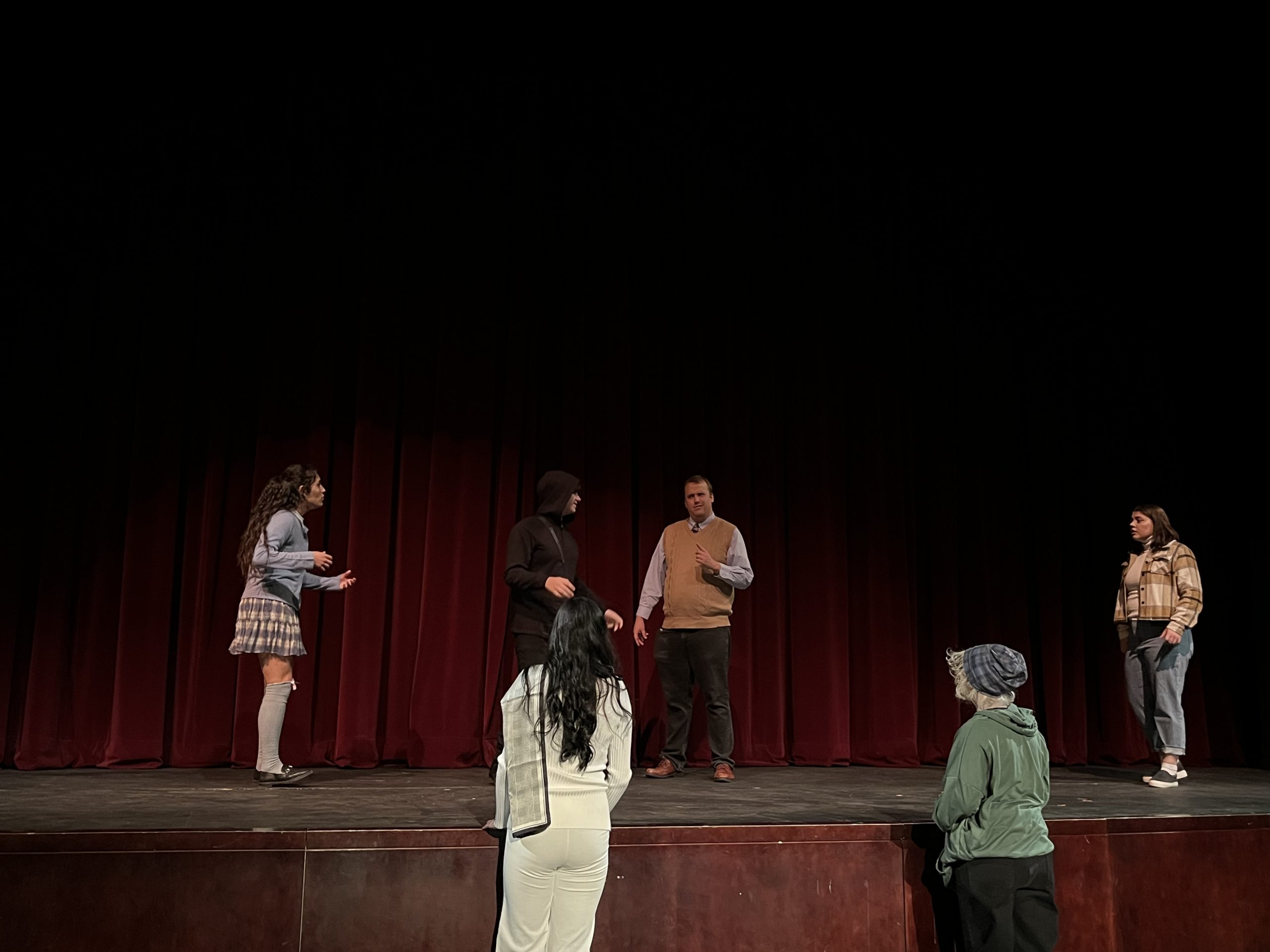 Dixie State University’s production of “Everybody” invites audiences to become comfortable with their fear surrounding death.

This production of “Everybody” is a modern adaptation of a 15th century play called “Everyman.” Directed by Matthew Koenig, assistant professor of theatre arts, the play follows the character Everybody who has just been told by Death that his time on Earth is up. Afraid to make the journey alone, Everybody seeks out “his companions” including Kinship, Friendship and Stuff in hopes that one of them will “accompany him to his appointment with Death.” Although all of the characters aren’t actually people, they are more like concepts, Everybody, Death, Kinship, Friendship, Stuff, etc. are all played by individual actors.

Koenig said the theme of the play is the idea that everyone has to come to terms with death and what you’ll leave behind when you go. “Everybody” is unique from traditional plays because most of the actors draw their characters out of a lottery for every show, so they don’t know who they will be playing each night. The lottery style of assigning roles is meant to symbolize the randomness of death.

Kailey Robinson, a freshman integrated studies major from Yucaipa, California, has embodied several characters including Stuff and Strength. Her favorite aspect about playing Stuff is she gets to pull back the layers of Stuff’s character. Strength is a joy for Robinson to play because the character is fun to portray on stage.

“Performing is always enjoyable, but something about this specific character lets me play around and have a great time,” Robinson said.

All of the actors portray the character of Somebody at one point or another throughout the show, including Brookelyne Peterson, a junior theatre major from St. George. Peterson said she was drawn to the play because the characters aren’t really people, but essences of feelings like friendship or love.

“In this show, characters aren’t specific to a certain type. These characters can be played by anyone at any time,” Peterson said.

Koenig said he enjoyed letting the actors explore their characters first without giving them much direction. As a director, Koenig said it can be tempting to control all aspects of a play’s performance, but allowing the actors to struggle and figure things out was the best choice he could make.

“I learned that creativity has to come intuitively,” Koenig said.

Robinson’s favorite memory from this production happened during tech week when the cast and crew were growing tired and “quite frankly a little delusional.” Koenig had been eating an apple while giving notes to the actors when he took the half eaten apple and placed it into his jacket pocket.

“Now we all give him sass for eating apples and poke fun at him enjoying linty apples,” Robinson said.

If you’re interested in seeing “Everybody,” the play runs from Feb. 24-Feb. 26 and March 1-5 and starts at 7:30 p.m. in the Dolores Doré Eccles Fine Arts Center Mainstage Theatre. Students, faculty and staff along with community members can come and see the play for free. To increase accessibility and ensure that anyone can watch the play, there will be American Sign Language interpretations of the production on March 3-4.