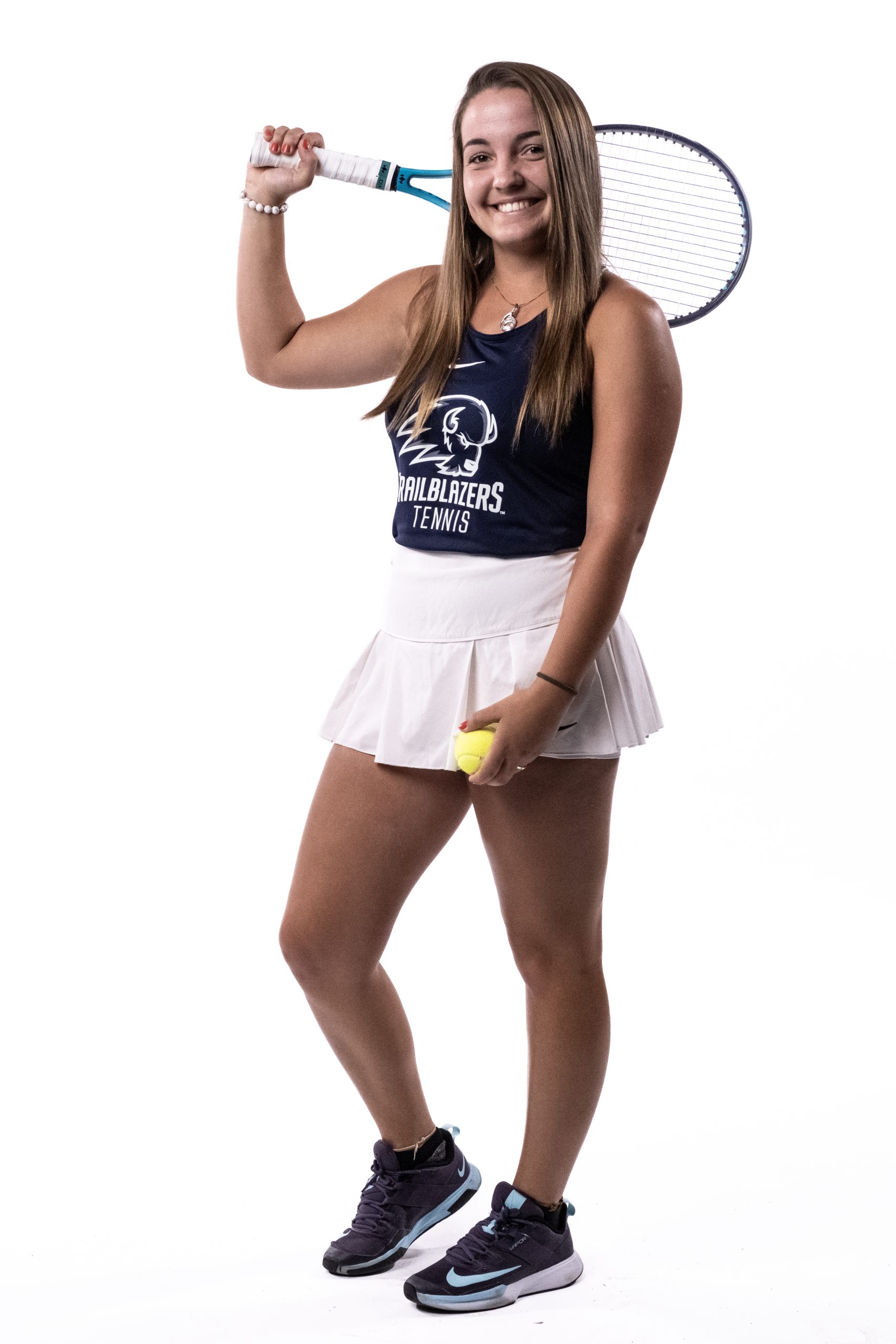 Juliana Honczaruk is a senior business administration major from Corrientes, Argentina. She was able to win her first singles win of the 2022 season at their game against North Dakota on Feb 19. Photo Courtesy of UMAC.

Dixie State University’s women’s tennis team is working hard in practice and tournaments and are continuing to see improvements every day.

The DSU tennis team started its season on Jan. 15 against the University of Utah. The team has competed and lost seven tournaments this season.

The scores at the start of the season have not been great on paper, but the scores do not reflect how the team has played, said Head Coach Eric Pelton.

Pelton said in the last match at Utah State University the team was competitive in the singles and doubles sets. Most sets ended in a third set, and this is where most of the struggles come from, finishing out the last set.

“Four out of the six singles matches went into a third set, so if we would have finished we would have won Utah State,” Pelton said.

Alysha Damron, a sophomore psychology major from Heber City, played a doubles and a singles match against Brigham Young University.

Following her matches at BYU, Damron said she is unable to play or practice for the next four weeks due to reoccurring symptoms of a concussion, and a fracture in her left hand.

“I was playing really well when I started getting some symptoms from the concussion,” Damron said.

Doctors told Damron that in addition to her previous injury, she also has pox. A disorder with the autonomic nervous system causing extreme physical exertion.

Damron hasn’t won a match yet this year. She said this has been her biggest struggle and is continuing to grow stronger and overcome these injuries. She hopes to be back on the court in the next four weeks.

Alexandra Hildreth, a junior psychology major from Tring, Hertfordshire, United Kingdom, competed in the last match against Utah State with a close singles match that ended in a loss in the third set.

Hildreth has been playing in the number one spot against highly skilled players, but she has been more competitive, aggressive and determined which will help with competing at this level.

“I have faced some girls that have been very good and they are a level above what I am used to competing against,” Hildreth said. “I’ve kind of been thrown in the deep end.”

Hildreth said being able to compete against these skilled athletes has helped her improve her own game. She said, “I have been getting better every week and it’s just the start of the season.”

The team has based practices toward individual improvement by creating new scenarios they can overcome to win the third set. Hildreth said the coaches will stand in the quarter serve and resemble game-like situations. This helps the athletes to overcome the struggles they are having in their last sets to win the matches.

The team will compete in its next game against Arizona Christian University in Glendale, Arizona on Mar. 4. They hope to put their hard work at practice into play and successfully finish out the matches.