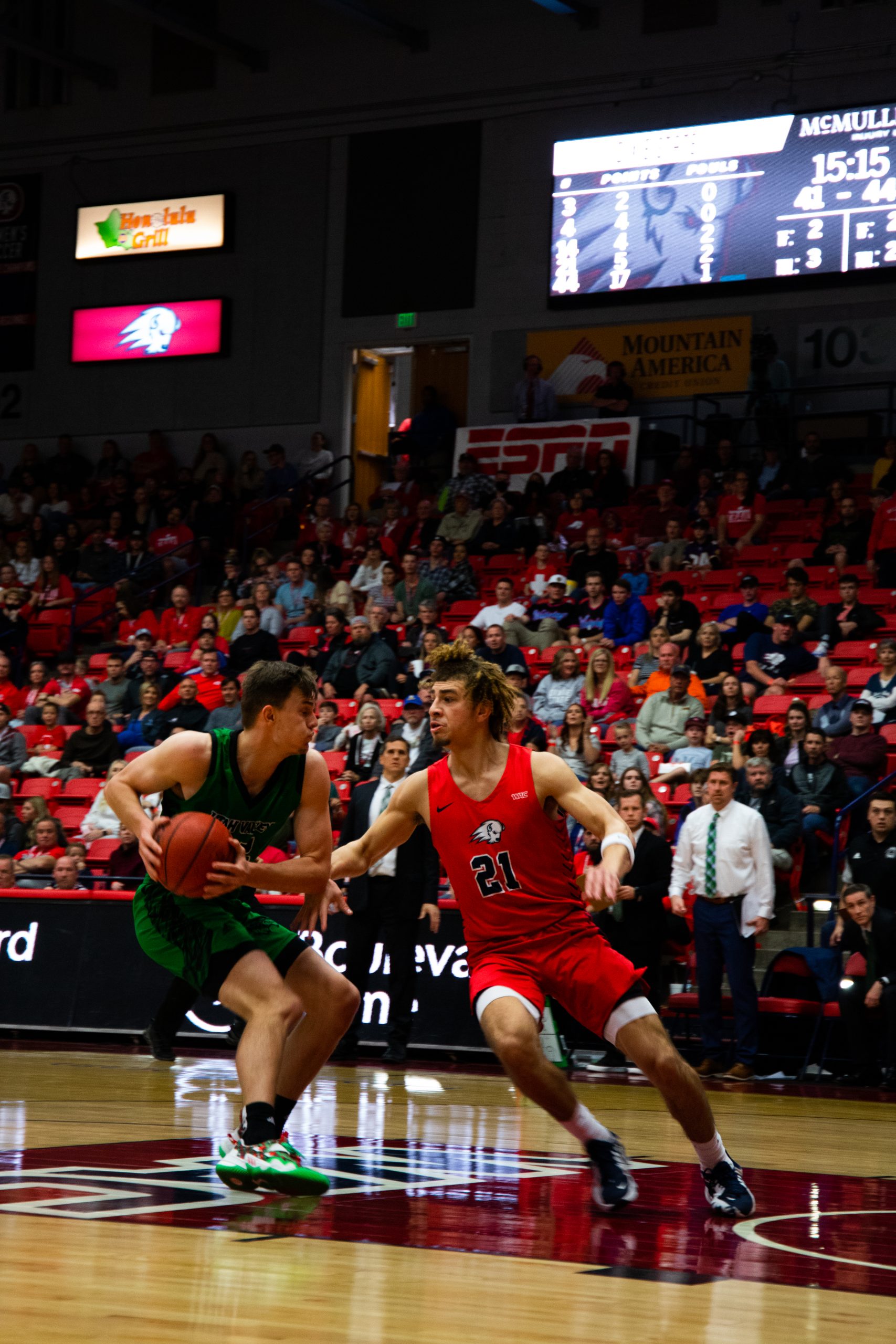 Hunter Schofield led the way for the Blazers with 26 points and seven rebounds. Despite UVU’s Fardaws Aimaq’s incredible effort of 20 points and 21 rebounds, the Blazers came out on top.

DSU had a slow start to the game. After losing the opening tip, DSU went on to allow UVU to shoot a blistering ¾ from the field, including two from deep.

After falling behind 8-0, Frank Staine, a sophomore business management major from Inglewood, California, made a 3-pointer, giving the Trailblazers their first points of the game.

From that point forward, it was an impressive back and forth scoring eruption out of both teams. DSU was able to snatch a few steals after going into a full-court press out of a timeout. This cut it down to just a 20-18 advantage for the Wolverines with 11:20 remaining in the first half.

For the next five minutes, it continued to be a back and forth battle. DSU’s Andre Mulibea, a freshman communication studies major from West Valley City, hit three and one free throw, tying up the score at 27 with 6:57 remaining in the half.

Cameron Gooden, a junior recreation and sports management major from Frisco, Texas, then gave the highlight of the game as he broke the tie with a posterizing dunk on the next possession. As the crowd erupted Gooden’s dunk not only gave DSU the lead but the momentum as well.

DSU was able to expand their lead down the final stretch and headed into the locker room with a 36-32 advantage at the half.

Schofield led all scorers at the half with 17 first-half points. Staine was the second-leading scorer for DSU with seven.

Aimaq led the way for the Wolverines with 13 points as well as eight boards at the half.

DSU came out sluggish in the opening minutes of the second half, giving up a 14-5 for UVU.

Down 46-41 with 15:11 remaining, Gooden and Schofield each knocked down a 3-pointer giving the Trailblazers a 47-46 advantage in the game.

The back and forth affair continued as the lead continued to change between both sides. UVU then went on a 9-0, ending with two free throws from Justin Harmon, sophomore UVU guard, that gave them a 69-62 lead with under 40 seconds left to play in the game.

DSU’s improbable comeback was kicked off with Dancell Leter, a junior business management major from Paramaribo, Suriname, corner 3-pointer that cut the deficit to just four points with 27 seconds left in the game.

Harmon missed the first of a one-and-one opportunity at the line for UVU. DSU then quickly kicked it up the court for a Schofield layup with just 15 seconds remaining, making the score 69-67 in favor of UVU.

DSU then intentionally fouled UVU’s Connor Harding, sending him to the line with 12 seconds remaining in the game. Harden made the first and missed the second, leaving the door open for the Trailblazers.

Trailing by just three points, Gooden took it to the cup and was able to draw the foul and finish through contact. Gooden hit the free throw, completing the three-point play and tying the game 70-70 with just 6 seconds remaining.

Head Coach Jon Judkins said this about Gooden’s play: “He’s been in the gym a lot. We watched film on [UVU] and they were going under all our ball screens with him, making him shoot it, so we told him that he’s gotta spend some time in the gym and he did. When he’s shooting and feeling confident hitting a couple of those threes they have to guard him and when they do that he can get to the hole.”

Harding took it strong to the hole but had his game-winning attempt blocked at the buzzer. This game went into overtime.

After slow starts in both the second and first halves, Hunter Schofield, a senior exercise science major from Spanish Fork, knew the Trailblazers had to get out to a strong start in overtime.

“We got off to super slow starts at the start of both the first and second half,” Schofield said. “With just five minutes in overtime, we knew we had to come out strong.”

This sentiment obviously was the mindset for everyone on the team as the Blazers held UVU to five points with no field goals in the overtime period.

With wins against UVU and Grand Canyon University in the span of a week, DSU is getting hot at the right time. They hope to continue to ride this momentum into the final regular-season games as well as the WAC tournament.

DSU will be taking on California Baptist University at home on Feb. 24.