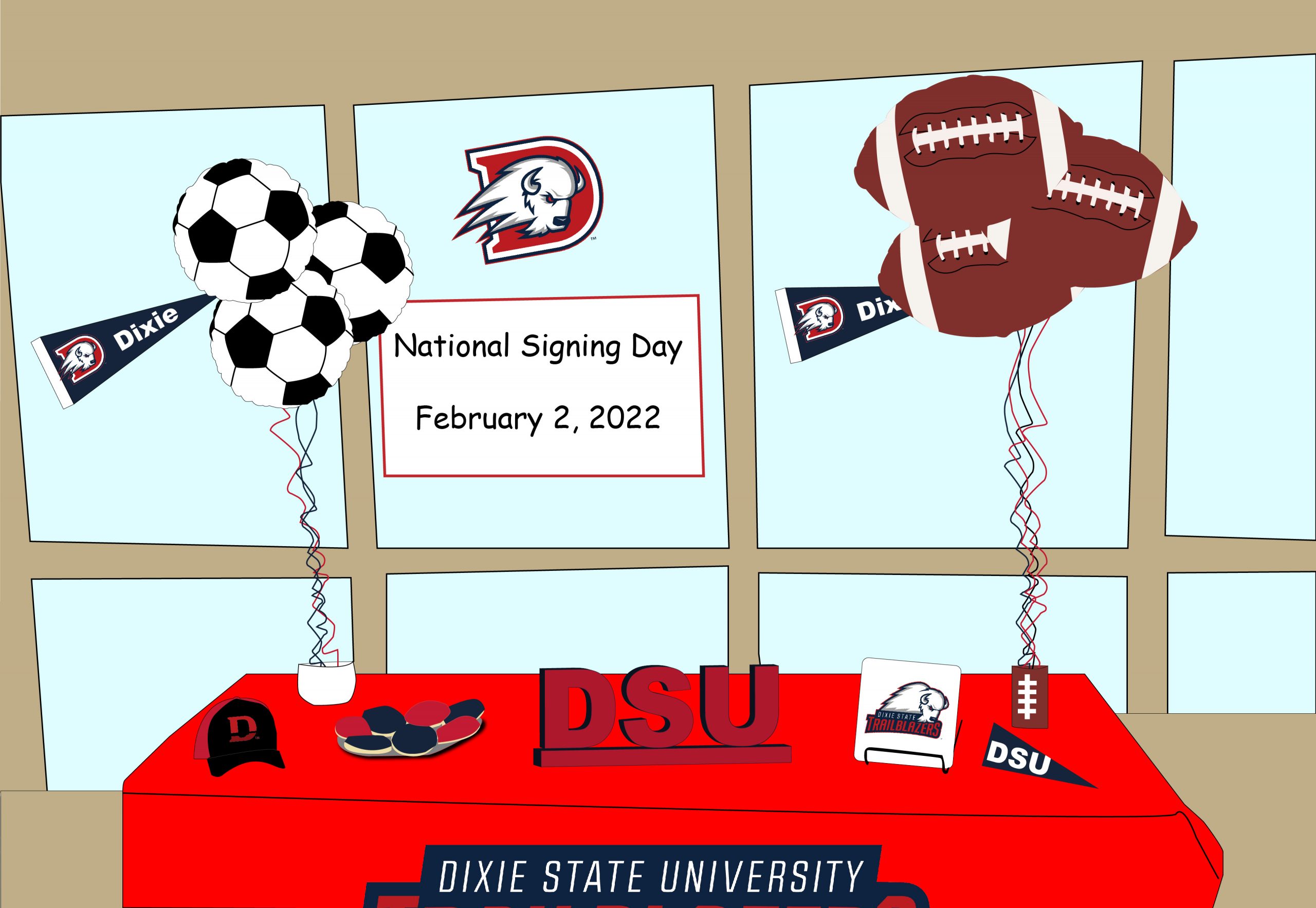 National Signing Day is an exciting day for a lot of high school seniors. They sign a National Letter of Intent to participate in collegiate sports. Graphic by Elissa Aguayo.

This week, high school athletes from all across the country signed with their expected college programs.

On Feb. 2, National Signing Day made its way to Dixie State University. Head football coach Paul Peterson announced the signing of 11 players plus two walk-ons for the upcoming 2022 season.

A few of these new additions include: quarterback Bronson Barben, running back Thomas Jones and defensive lineman William Kulihaapai-Alovao.

Bronson Barben from St. George helped lead the Dixie High Flyers to the 2021 Utah 4A State Championship game. That season he threw for 1,731 yards and 16 touchdowns on his way to Deseret News first team all-state honors. During the course of his prep career, Barben has passed for 4,268 yards and 33 TDs.

Peterson spoke highly of Barben saying: “The quarterback of the Trailblazers’ future. Bronson has an NFL arm, proven winner, and is an elite competitor. Despite being sidelined for most of the season, Bronson led the Flyers to the [Utah 4A] state championship. We can’t wait to get him back after he serves a mission.”

Thomas Jones from San Diego, California, rushed for 583 yards and six touchdowns last season. He averaged 10.6 yards per carry and put up three 100-yard rushing games over the course of that time.

Peterson said the first thing he noticed about Jones was his effort. He said he has the size and speed to be a record setting back with great field vision and potential that’s through the roof.

William Kulihaapai-Alovao from Kapolei, Hawaii, was selected to play in the 2022 Polynesian Football Hall of Fame Bowl. Standing at 6 foot 3 inches and weighing 230 pounds, he is considered to be amongst the fiercest of pass rushers.

Peterson said: “Will is a dynamic player with tremendous upside. He will be a big time impact player for the Trailblazers. He is super athletic and his motor won’t stop. Excited to watch him wreck some quarterbacks in the future.”

Peterson said they’re super excited for what this 2022 class has to offer. He praised his staff for choosing such high character and dedicated athletes that will fit right in with the culture at DSU.