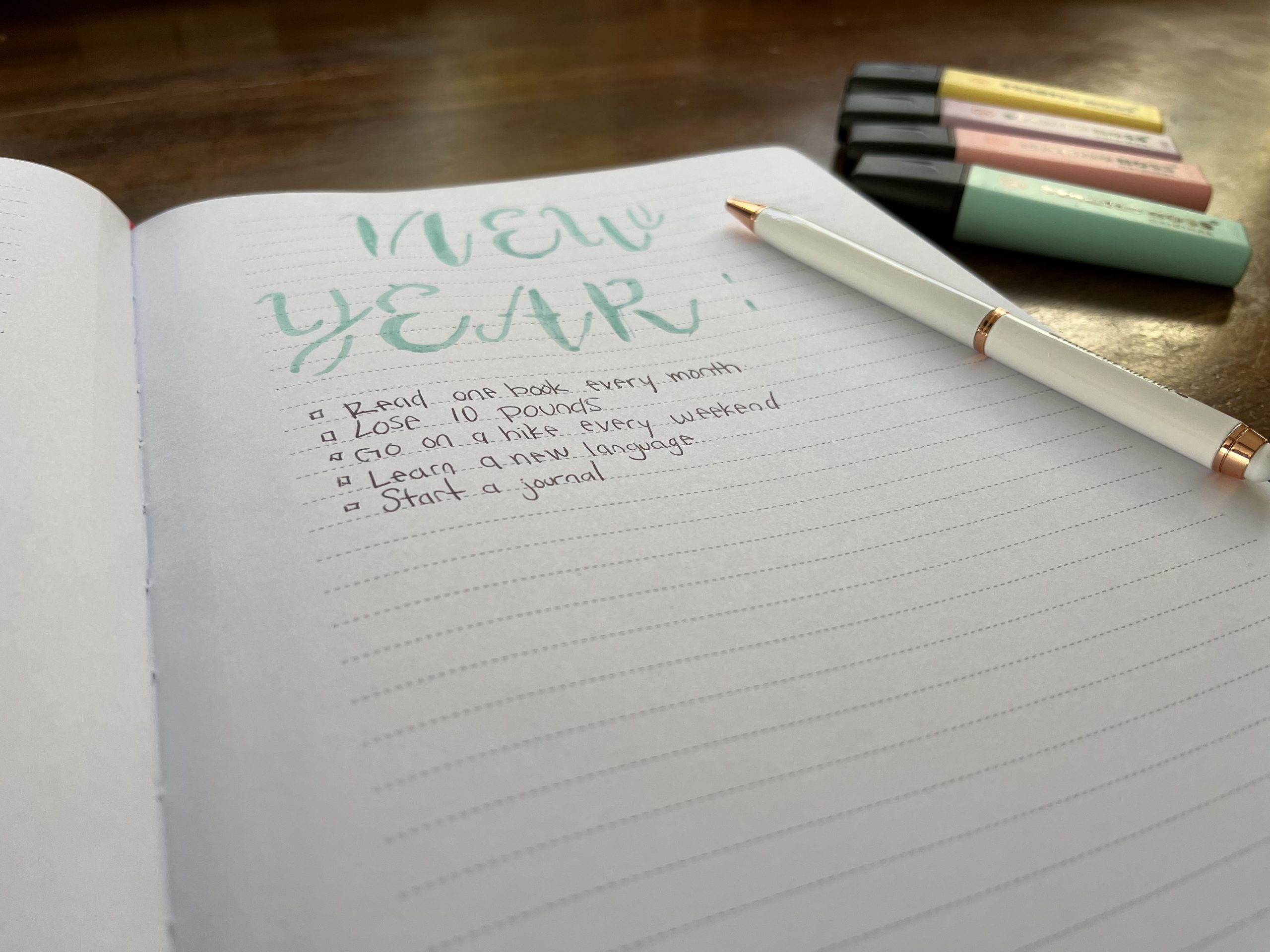 It is common for people to create New Year’s resolutions of things they want to accomplish throughout the year. Cammie Johnson, however, says it’s unlikely people actually follow through with theirs. Photo by Kristi Shields.

Let’s be honest with each other, we would all be lying if we said we have never made a New Year’s resolution list in order to “better ourselves” for the upcoming year.

While each neatly, constructed and personalized New Year’s resolution we make for ourselves has great intent, the likelihood of most of us actually following through with it is unfortunately slim.

I can personally attest to this statement because I, too, have made my fair share of goals I planned to conquer in the year to come; however, like most lists, they always find their way neatly tucked away at the bottom of my desk drawer until I decide to clean it out.

“According to some statistics I didn’t fake myself, about 70% of all people abandon their New Year’s resolutions already at the end of January,” Tobias Van Schneider said. “I mean, it makes sense. Most of these resolutions are unattainable and the majority of them are just plain boring. Things like, work out a lot, be healthy or other crazy goals are just too easy to break.”

We all would like to sculpt ourselves into this picture-perfect image we have set out for ourselves, hence the resolutions we strive for every year, but more often than not, breaking these goals is far easier than actually developing them.

If you have set a New Year’s goal for yourself and can honestly say you have accomplished it or are still striving towards a said goal, then I salute you. For us less enthusiastic individuals, most New Year’s resolutions seem like just another item to add to an already overloaded list of to-do’s.

Perhaps New Year’s resolutions aren’t a hoax in their entirety, but this only applies to goals that aren’t completely drastic. What I mean by this is perhaps setting goals centered around bettering your mental health or staying on a path to further you as a person may be a more reachable and easier goal to follow.

Schneider said: “Now what I do instead is writing an ANTI to-do list which is kind of like a resolutions list, but more focused on the negative aspects I want to avoid in my life. It’s kinda like calling myself out and building a system around my mental state rather than focusing on goals that are too easy to dismiss.”

New Year’s resolutions are probably some of the most challenging tasks we can place upon ourselves. The reason for this is because we are completely on our own when it comes to the accountability of said goals. We all know the common saying “you get out of it what you put into it,” but when it is a task in which we don’t specifically need to accomplish. The straight and narrow path to the end becomes a little less steady.

According to betterliving: “Most people are unrealistic about what they want to achieve, and how quickly. They set goals that are too vague. And finally, they are not accountable to anyone – as a New Year’s resolution is a personal goal, there’s no one to pull you up when you decide to skip it that day or give up altogether.”

While it may be difficult to admit to ourselves, New Year’s resolutions just might not be for everyone, and quite frankly, why do we have to “better ourselves” at the beginning of a new year as opposed to attempting to be a little bit better than who we were in days past?

Often times when we set these unrealistic expectations on ourselves, also known as “false hope syndrome,” and we fall short, it has the potential to be damaging to our mental wellbeing, therefore leaving us worse off than before.

“Psychology professor Peter Herman and his colleagues have identified what they call the ‘false hope syndrome,’ which means their resolution is significantly unrealistic and out of alignment with their internal view of themselves,” Ray Williams said. “This principle reflects that of making positive affirmations. When you make positive affirmations about yourself that you don’t really believe, the positive affirmations not only don’t work, they can be damaging to your self-worth.”

I say, enough with the resolutions and unattainable goals. Let’s strive to mold ourselves into who we wish to be every step of the way, 365 days of the year. Just because a new year is on the horizon doesn’t entirely mean we change along with it.

Stop making unrealistic goals for each new year, instead, strive for goals which will better you in your everyday life, ones which are far easier to maintain and hold yourself accountable for. These types of goals would be — but not subjected to — setting aside time for self-care, spending more time with loved ones, and even dedicating free time to the things you love the most.

Here’s to the upcoming year, but remember, just because it is a new year, doesn’t mean we become someone new. It is up to all of us to make a change, not to make a list of unreachable goals in hopes it will provide motivation. So, put down the pen and paper and just enjoy this holiday season surrounded by those you love.