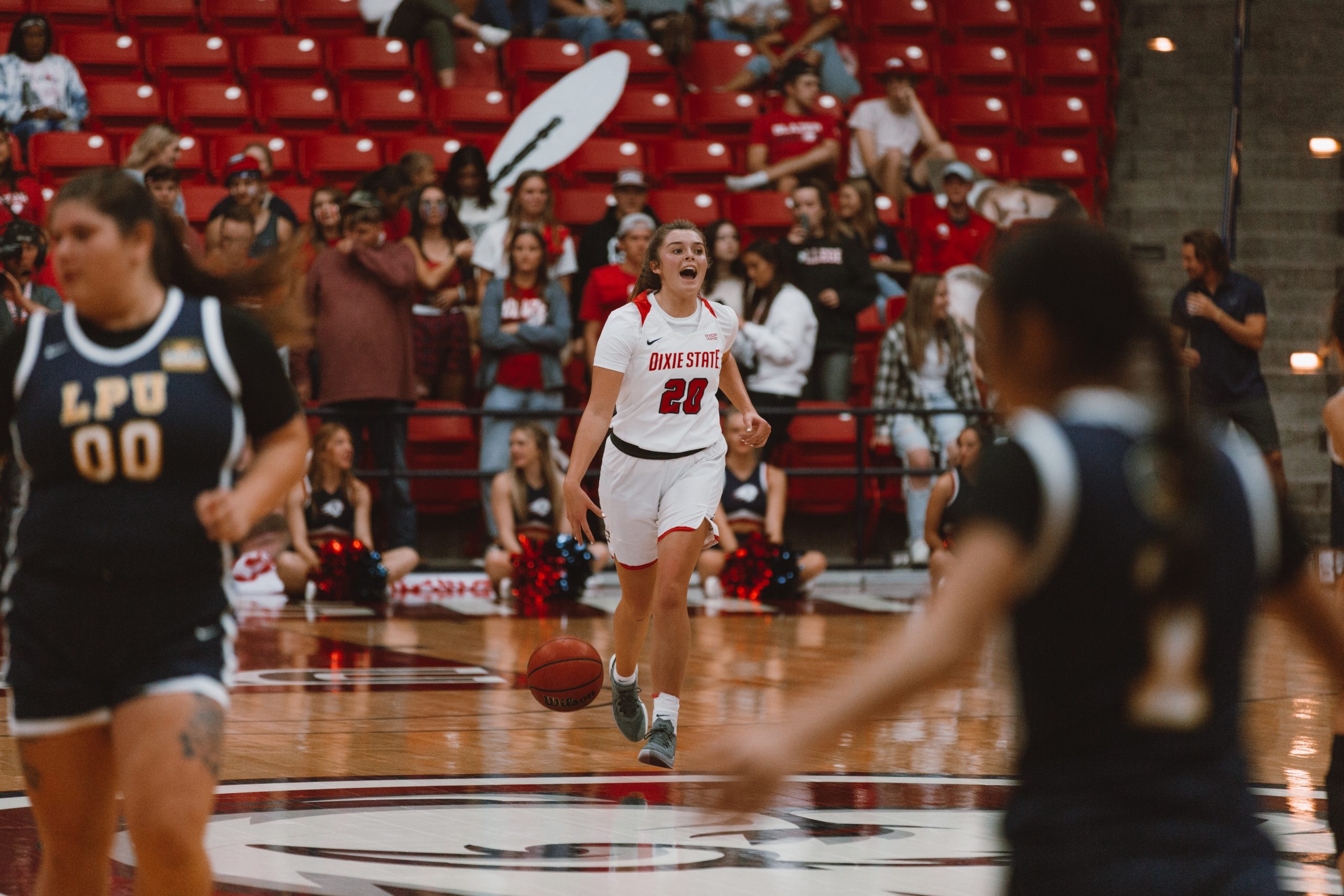 Breaunna Gillen, a junior biology major from West Jordan, dribbles down the court in Tuesday's home opener against Life Pacific. Gillen earned a triple double which helped lead the Trailblazers to a 107-57 victory. Photo by Emily Wight.

Two records were broken, and one was tied as the Dixie State Women’s basketball team couldn’t have started its season much better.

Offensively, the Trailblazers weren’t afraid to let it fly from three-point land. Fifty-one attempted three pointers is a new school record and 22 of them went in, which is also a school record. DSU routed the Life Pacific College Warriors 107-57 Nov. 9. The 107 points that were scored tied the highest of all time for DSU women’s basketball.

“That’s what we are going to try to do and be about,” head coach J.D. Gustin said. “Our goal is to shoot 50 [three-pointers] every game. Fifty-one in this game actually isn’t enough.”

After having last year’s season canceled because of COVID-19 and the challenges it brought, the Trailblazers came out of the gate ready to play.

“[Being back in the arena] was the best part about the game,” Gustin said. “Just being here was fantastic.”

The game started with three quick three-pointers and another basket, giving DSU a quick 11-2 lead, which would widen to 19-8 advantage.

“We were all really pumped and ready for the first game of the season,” said Talia Sireni, a junior general studies major from Surrey, BC Canada. “We were excited to be out there.”

After two quarters, the Trailblazer’s lead was 56-30.

It was all gas and no breaks for the Trailblazers starting the second half going on a 15-6 run to start the third quarter. This giant run seemed to have taken the life away from the Warriors as they couldn’t compile a run themselves to get back into the game.

“We really shared [the ball] well,” Gustin said. “It might sound simple, but that’s the way we are going to try to play. We want to be aggressive, but also share it to make the extra passes.”

DSU posted 28 assists in the blowout victory against the Warriors and contribute the teamwork to trust in each other.

“It’s amazing how much our teammates trust each other,” Sireni said. “Every single one of us play well together and we play for each other.”

DSU showed a lot of trust in Maddie Warren, a freshman general studies major from Lehi, as she was the leading scorer of the night finishing with 22 points.

“We like to jam [out] to music before the game, and that got us really loose and confident in ourselves as a team.” Warren said. “We always get together off the court, so taking the court for the first time as a team was a lot of fun.”

The Trailblazers flexed their impressive shooting skills, finishing the game shooting 43.1% from deep.

The next time to catch the Trailblazers in the M. Anthony Burns Arena is Nov. 20 at 3:00 p.m. versus Antelope Valley.