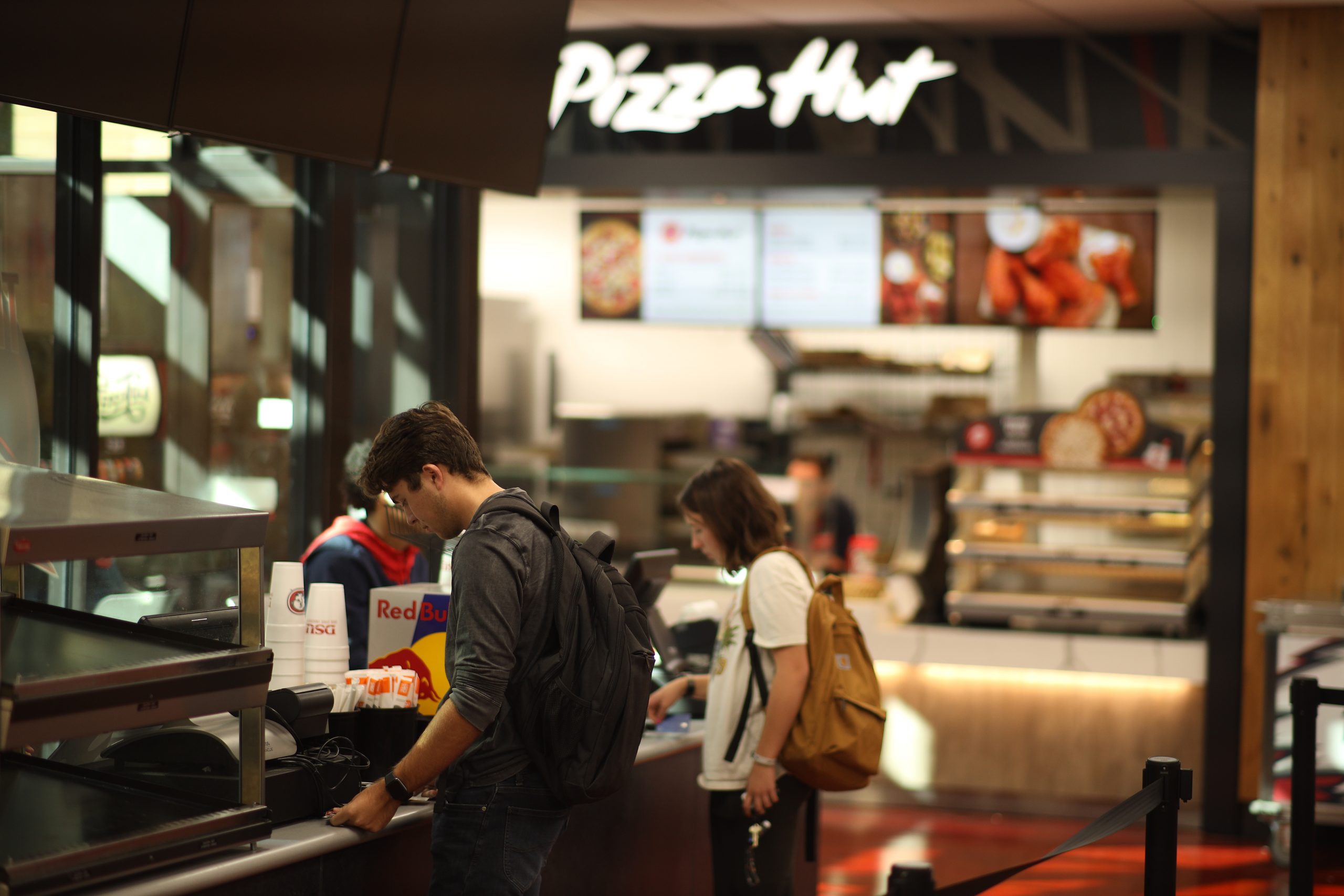 The food court in the Gardner Student Center is available to all students to stop and grab a bite to eat in between classes. Zach Gates, new director of DSU Dining Services, is planning to incorporate a few solutions to attract more students and add more food choices to campus. Photo by Misha Mosiichuk.

Weekly specials, healthier food options and longer hours are aspects that Dixie State University’s Dining Services have in store under the new director.

The new director of Dining Services plans to improve the experience of eating on-campus to attract more students.

Dining Services does not receive funding from student fees, so it relies completely on sales from the food, Dining Services Director Zach Gates said. If the food franchises do not take in enough to make a profit, then the places would slowly close down.

Gates said Dining Services needs improvement. During the pandemic, the food franchises were shut down for the most part so the staff was cut immensely, along with the food stock plummeting. He is currently working on building the staff back up and filling the shelves with more products for students.

Although Gates only started the job in September, he was previously the interim director while he worked on the Dining Services team from 2015-2020. During his previous years on the job, The Trailblazers Cafe was open all day, but now it is only open for a limited amount of hours due to a lack of customers.

The other food franchises like Brooks’ Stop receive more traffic, but The Trailblazer Cafe has a disadvantage because of its location. It’s in the Gardner Student Center where not a lot of traffic flows unless an event is being held in the Ballroom or the Book Store is open.

Meg Standiford, a freshman general studies major from Sandy, who works at Subway on campus said, “I think we actually do have a lot of student traffic and also other traffic besides students as well.”

Gates found the food franchises were throwing a lot of food away at the end of the day because they didn’t get enough customers, which led to overspending on labor costs as well.

“This is not a campus where everybody hangs out and spends all day on campus,” Gates said. “If we create an environment where it’s fast food then people will come and hang out in the Cafe because they are getting their food fast.”

He added that he wants to create a better and more efficient system where the employees understand how to strategically order food so less is being wasted.

“The better we are at that, the more we can build and add onto the building,” Gates said. “We can offer better service all-around if we are better at our business.”

The goal of Dining Services is to provide great customer service.

“People want to have a reason to come to these locations,” Gates said. “It’s the friendliness, the service, the cleanliness, that’s the goal: To make it something inviting to students, faculty and staff to want to come to and feel as if you aren’t a burden to student workers and all of us.”

Gates also plans to create more food options by either adding additional food franchises as the university adds buildings on campus or by adding different foods to the cafe menu. He’s heard complaints from parents of students about campus having too many fried and fatty foods and not enough healthy options. He wants to incorporate that option for students more between now and the next fiscal year.

The concept of offering healthy options like a salad bar — which the Trailblazers Cafe had in the past — is inexpensive, Gates said, but it’s the fact that students are not as attracted to it that leads to wasteful problems.

Nielson said: “If I’m eating on campus, I’m just going to get fast food and if I want to eat something healthy, I’ll make something at home.”

Gates wants to increase traffic in the Trailblazers Cafe by offering specials on specific days such as Taco Tuesday and on the busier days, the cafe could possibly be open for longer hours.

Nielson said if the Trailblazers Café would offer promo deals or special foods on certain days, she would be more inclined to eat there because it’s something new and unique.

Gates said he invites students, faculty and staff to give suggestions as to how he can improve Dining Services on campus to better their experiences. You can email him at Zach.gates@dixie.edu, call at 435-652-7683, or find him in his office in the Gardner Student Center room 101.