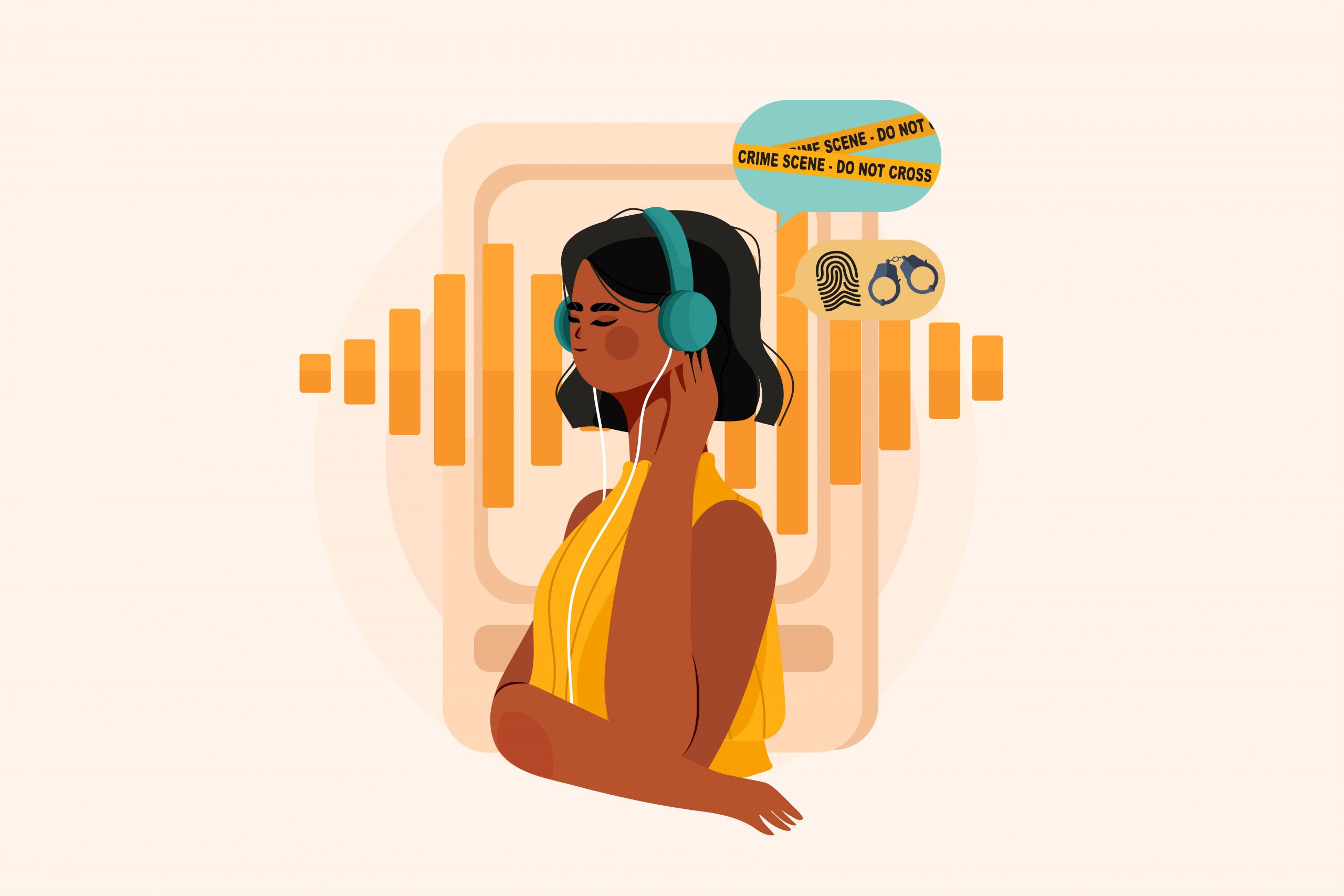 True crime podcasts have gained popularity over the past couple of years. Writer Emma Brown claims that large amounts of true crime consumption can be detrimental to ones mental health. Graphic by Emily Wight.

Crime Junkie, Cold, My Favorite Murder, and Tiger King are all examples of popular true crime that could be affecting your mental health.

True crime is told through podcasts, films, and books and tells the stories of real serial killers and murders. While true crime offers great entertainment, it can be detrimental to your well-being.

True crime has grown in popularity on all platforms. Netflix has released 18 true crime films since March 2020. Eight of those films held the number one spot on Netflix’s top charts for a total of 58 days.

According to The Ringer, the true-crime films on Netflix have cumulatively totaled 232 days in the top ten charts. The 232 days is around half of the total days that Netflix has begun showcasing the top ten.

True crime is especially popular among women. Women throughout the years have shown more interest in true crime than men. Popular podcast Wine and Crime reported that 85% of their audience is female.

The popularity of true crime proves its exciting nature, but too much consumption of true crime is detrimental to our mental health.

The effects of true crime can include increased fear of leaving the house, being paranoid around people, and higher anxiety.

An article from the Cleveland Clinic on the effects of true crime stated: “Too much true crime ceases to be about curiosity and starts becoming fear-based instead. When we start to feel worried and afraid all the time, it takes away the fun of it. It starts to instill anxiety in us instead.”

The excitement of true crime is the same as the excitement of horror movies, but it is a more realistic fear. The reality of the crimes can turn the fun into a daily mental health struggle.

When it is too much you will feel a difference. I have personal experience with obsession over true crime. I was hooked on the Cold podcast which tells the “cold case” story of Susan Powell. It consumed my thoughts and I experienced increased paranoia. When it began to cause me to lose sleep I decided to ease up and listen less often.

True crime is still great content, but it can be beneficial for your mental health if you split up consuming crime content with comedy, romance or fantasy. These genres act as a reminder of the lighter aspects of life which can make all the difference.

Although it is called true crime, according to EliteDaily, “It’s an unfortunate reality, but oftentimes, justice isn’t served as quickly and efficiently as true crime shows would have you believe.”

The excitement of true crime is uncovering the mystery, but criminal cases aren’t as simple as they may seem on the media.

If you are a frequent consumer of true crime, take a break and see how true crime has been affecting your anxiety, fear or paranoia.