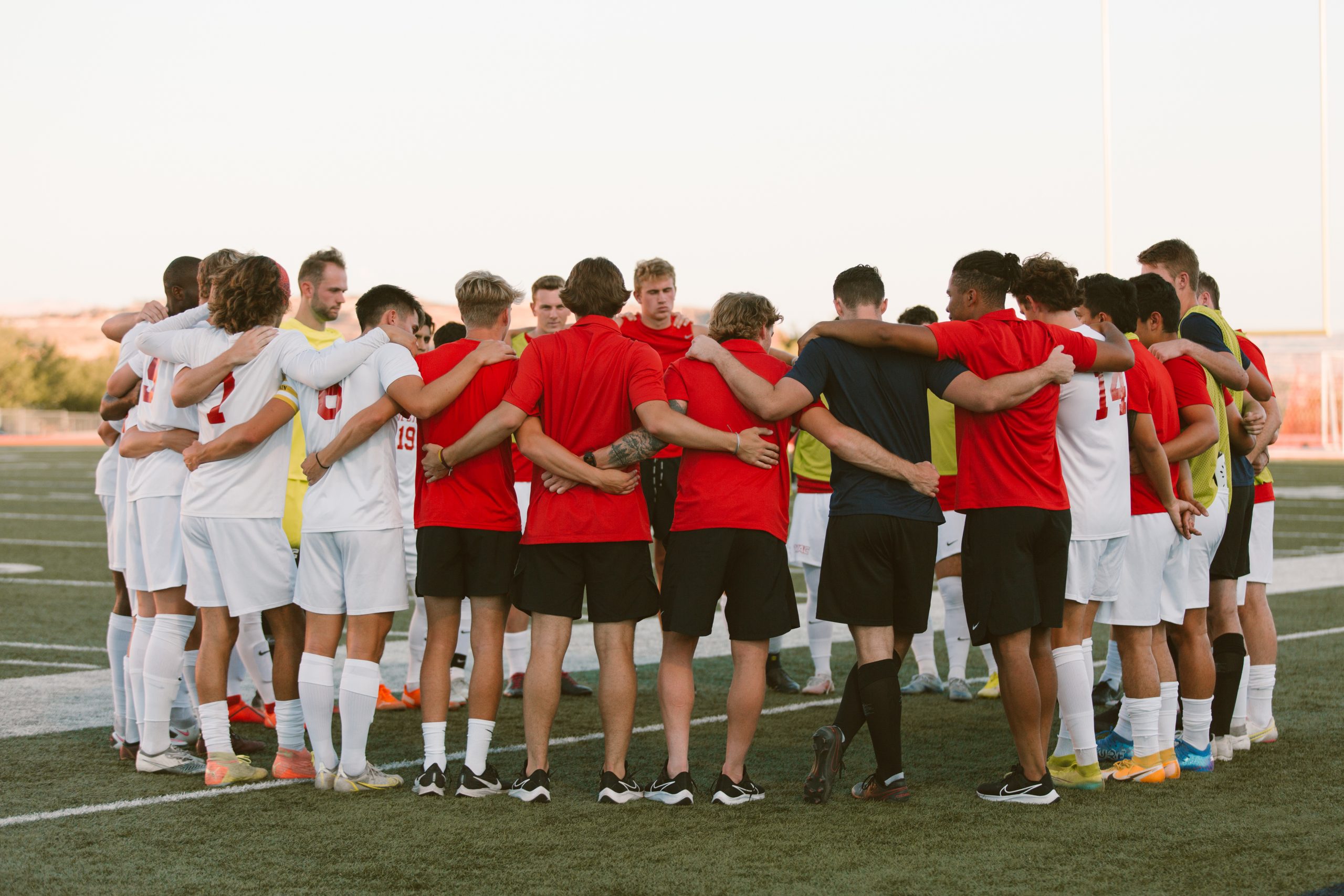 The DSU men's soccer team huddles before game against UC San Diego on Aug. 26. Since the teams win on the 26th, they have struggled to score goals. Photo by Emily Wight.

The Dixie State University men’s soccer team is remaining positive despite the struggle to secure wins this season.

The season started strong with a shutout win of 1-0 against the University of California San Diego Aug. 26. Since the season opener, however, the team has had difficulty scoring goals, head coach Jonny Broadhead said.

The team is relatively new to playing at the Division 1 level, and as a new program, going head-to-head against top-ranking teams has proven to be challenging, Broadhead said.

Broadhead also said the team has shown resiliency after the losses they’ve faced this season but wishes the team would be more resilient during the games.

“I think the resiliency after the game to let it go and move on and be ready for the next game with a good attitude — with all the right intentions — has been what they needed to do because that’s not easy when multiple losses come in a row,” Broadhead said.

Midfielder Niko Shumov, a senior marketing major from Keaau, Hawai’i, said traveling has been taxing on players as they’ve had early mornings and late nights on the road.

“Pre-conference, the majority of our games were on the road and it’s very difficult to win away, ” Shumov said. “Flights, finding meals and sleeping not at home, it’s [all] very difficult.”

Shumov also spoke on the importance of each player working hard. He said each player needs to work for themselves and their teammates, regardless of what mistakes are made on the field. The team is in their second year of playing at the D1 level, so they are still trying to figure out where they belong amongst their competitors.

“Being a relatively new team, we’re still searching for our identity,” Shumov said.

Midfielder Jimi Villasenor, a junior marketing major from Las Vegas, said the team recently discussed buying into the game plan and encouraging one another.

“Sometimes we’ll bark at each other or say things on the pitch and it really isn’t acceptable for us if we want to get to the level we want to be at,” Villasenor said.

The team has managed to leave frustrations on the pitch and have each others’ backs after a loss, Villasenor said. He also said team bonding is vital to the success of the team and he enjoys hanging out with his teammates on and off the field.

Broadhead spoke about how the senior players on the team are starting to see the end of the tunnel for their athletic careers. The team only plays 18-20 games per season, so seniors need to make every moment count, Broadhead said.

“From the first minute of warm-up until the end, every single day at practice, [players have] worked [their] whole lives to be here, there’s no reason why [they] should take a day off,” Broadhead said.

Broadhead said he has been impressed by the team’s willingness to listen and be coached to understand the weaknesses leading to these losses. The team has managed to let go of the losses they’ve faced, recognize their mistakes, and move on.

“We’ve had quite a few losses, so you’ve got to find successes in other ways and I think the team has evolved, they’re not the same team they were,” Broadhead said.

Villasenor said the home fanbase has been more active this season. Having support from students, faculty and staff have made a difference for the players.