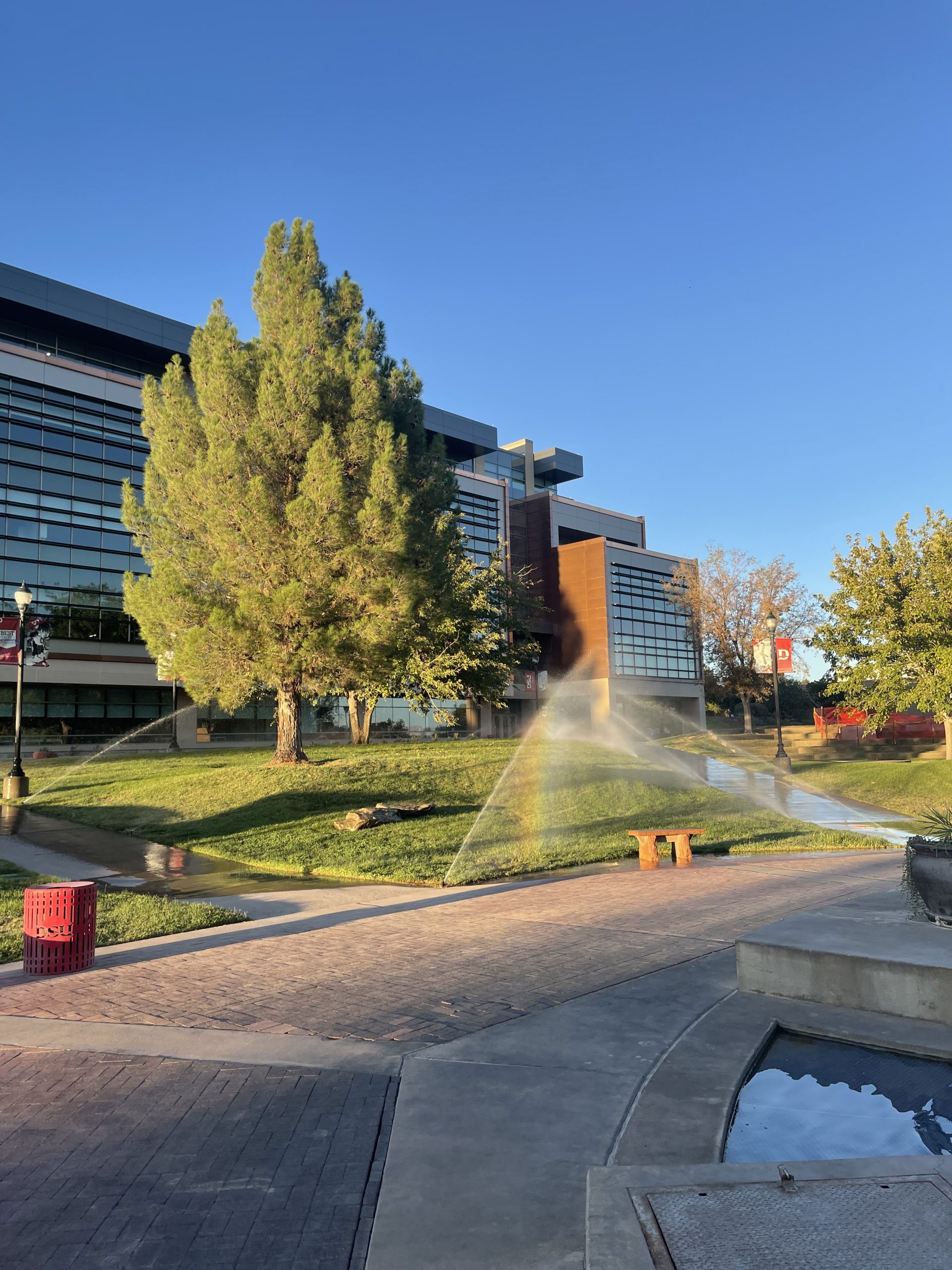 Sprinklers across campus run several times a week to keep the grounds looking green. Gov. Spencer Cox signed an executive order during the summer requiring increased water conservation due to the drought. Photo by Misha Mosiichuk.

Following Utah’s drought year, the Dixie State University community is urged to continue staying aware of its water usage to ensure 2022 is better.

Although DSU on-campus housing does not currently have a water conservation program for students to follow for indoor use, it has been discussed in the past and there is a possibility of one in the future, said Seth Gubler, director of housing and Resident Life.

Facilities Management is responsible for the landscaping and sprinkler needs around on-campus housing, as well as the rest of campus’ watering needs. The campus does have a water conservation plan it follows which is based on the state’s regulations.

Jon Gibb, director of facilities planning and construction, said the groundskeepers follow a watering schedule based on the state-wide drought plan.

Gov. Spencer Cox signed an executive order during the summer requiring increased water conservation due to the drought.

In the spring of 2020, Utah dried out and without monsoons that year, the drought began. Southern Utah is more reliant on monsoons for water than the rest of the state is, so in some ways a dry year can be worse for this region.

This year, in particular, southern Utah was OK because it had a lot of stored water from previous years at the large reservoirs like Sand Hollow, said Laura Haskell, drought coordinator for the Utah Division of Water Resources.

“We used more stored water this year than we typically do,” Haskell said.

Outdoor water usage is a big deal when it comes to droughts, Haskell said, so the university should be aware of their landscaping and make sure it is not being overwatered.

“Outdoor water can take up to 60% of residential use,” Haskell said.

In response to the executive order, DSU groundskeepers limited watering the lawns to three times per week; however, Gibb said DSU got approved for a variance to water its new plants more often so they wouldn’t dwindle out. This allows the groundskeepers to water the plants at the new Science, Engineering and Technology building and Campus View Suites II 7 days per week.

Anytime Facilities Management replaces landscape for a new construction project, the landscape architect they hire chooses native plants that are drought-tolerant to the area.

Another precaution the groundskeepers follow is mowing the grass taller in areas like the Wellington & Margaret McDonald, Jennings Communications Building, Jeffrey R. Holland Centennial Commons, S. J. Atkin Administration Buildings, etc. The grass in the playing fields is mowed shorter and more regularly to accommodate for the sports that play on them like Soccer and Baseball.

Gibb said, “If you mow your grass less than 2 inches high, it will expose the root and when that is exposed it will require more water to keep it green, so we keep our lawns mowed at a 3-inch level.

A trick to saving water is watering lawns at night so the water is not being wasted and soaked up by evaporation during the day.

If sprinkles are on during the day on campus, it’s because the groundskeepers are testing the sprinkler system or doing maintenance, Gibb added.

Indoor water use is still important to pay attention to, though.

Wendy Dickie, instructor of the Practice in Environmental Science, said the DSU community needs to be aware of how much water they’re using in their everyday lives.

A few tips to lower your water use is to not run water the entire time one is brushing teeth or lathering hands with soap, run fewer laundry loads, take shorter showers, put a brick in the toilet tank so it doesn’t need to fill up as much, and even eating less meat can lower water use because it takes a lot of water to grow the crops to feed the animals.

People don’t need to take extreme measures to save on water like not flushing the toilet every time you use it, Dixie said, but you still need to be responsible citizens and do what you can.

“Little things add up, so if everyone is doing one or two things to lower their water footprint, that will make a difference,” Dickie said.

Haskel said: “We are in one of the drier states in the nation, so we should always be aware of what we’re using. We need to be careful of what we have, especially when our resources are bare, so when we have a dry year we have water in the reservoirs for the next summer.”

Everyone has a water footprint and should be conscientious about their water use so there is no risk of running out of water or the city needing to give its residents water restrictions, Dickie said.

Although Utah citizens don’t need to worry about big natural disasters like Hurricanes, the two things to worry about are droughts and flash floods. Too many people don’t pay attention to the fact that we live in a desert and that we do not have unlimited water resources, Dickie said.

“Even though it is a desert and we have less water, water is a big deal here because it is the No. 1 agent that shapes the landscape we have,” Dickie said. “Even though there is not much of it, when we do have it, it accomplishes a lot.

Haskell said Utah citizens overall did a good job conserving water this year. The Utah Division of Water Resources is monitoring Utah’s water situation for next year, and if it looks like it will be a dry year again, the department will send messages to people to prepare before they start irrigating and landscaping.

“We can’t change how much water we have, but we can change how we use it,” Haskell said.

You can read about more tips to save water at Slow the Flow.